A runner in Florence picks up the pace of her temporary home. 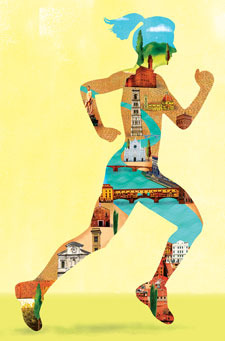 I was hit by a car during my first run in Florence. (And my parents still don’t know this.) I was three days into my study abroad trip, and I’d made several key mistakes: thinking 6:45 a.m. would be early enough to avoid traffic; thinking I’d be able to find my crucial turn out of Piazza del Duomo; thinking an Italian driver would slow down or even—oh, the naïveté—stop for a pedestrian.

There was traffic; I could not find the street; and while I was crossing an intersection during my sixth (seventh? eighth?) lap of the piazza, a white van reared into the crosswalk and rammed my hip. I stumbled, stunned, slammed my hand down on the hood, hurtled away from the tires and sprinted down the nearest alley.

Running in Florence would be harder than I’d thought.

The problem is that what makes Florence beautiful and charming is also what makes it a runner’s nightmare. The cobblestone pavement juts at angles that wait like bear traps to snap an ankle in two. Cars and Vespas whip breakneck around every blind corner. The medieval city plan, with streets threading like arteries into piazzas, roads that feed seamlessly into storefronts or change names at whim, had me stopping every block to frantically consult my disintegrating city map.

Unlike Stanford or my San Diego hometown, Florence wasn’t lying docile at my Asics-clad feet, ready to lead me down a wide, empty path to wherever I wanted to go. Canyon trails and beach runs, sweaty hill sprints at the Dish and lazy Campus Drive loops—running is how I orient myself, remedying my terrible sense of direction (the navigational ability of a goldfish in a plastic bag, I once said), searing landmarks into memory. It’s how I connect with a city. In Florence, there was only disorientation, a vertigo induced by cultural jet lag, by the warped street plan and tiny strade. Running makes the map in my head make sense. If I couldn’t run in Florence, I couldn’t know it—and if I couldn’t know Florence, I wondered how I’d ever belong there.

Florence was stubborn, but then, so was I. Two days later—with my alarm set 30 minutes earlier—I learned how the city looked at the crack of dawn: cobblestones wet from trundling street cleaners, the church of Santa Maria Novella dipped in champagne pink, the Duomo’s white marble made pale with sleep. In the morning hush I found the turn I’d missed and skimmed past shuttered leather stores and bakeries exhaling warm, sweet-smelling air. Halfway across Ponte San Niccolò, I glanced over the glass-still Arno and stopped short. The city cracked open like an oyster shell onto the golden double pearls of the sunrise, one in the sky, one reflected in the river. I snapped a picture. I couldn’t look away.

Miraculously, I made it to Piazzale Michelangelo, a little square perched high on the Oltrarno side of the river. After that, it was like I’d figured out the secret of running in Florence: waking early, running fast, home before 8 a.m. to prepare for class. Not that everything went smoothly: I was waking up in darkness three times a week, exhausted, sacrificing late nights out for early morning runs. September warmth disappeared with an October cold snap that brought rain every morning through November, muddying the Arno, soaking my scrunched-up face as I ran.

What I learned was that beyond the city center, Florence still felt like Florence, but different. The city shifted, leaned one way and then the other, and rebalanced, larger, quieter. One rainy morning on the way to Fiesole, a hillside town just outside the city, I paused under dipping tree branches during a downpour and was surprised by a cat perched on the mossy wall, regarding me calmly. I would emerge from the steep uphill climb to Piazzale Michelangelo with my legs trembling, the drizzle flecking my cheeks, jogging with stiff calves around the copy of Michelangelo’s David and following the statue’s gaze to the clustered city waking up below. Sunrise poured lemonade on the Duomo. These were not secret spaces, but at dawn they felt like it. In a city that seemed to have no place for me, they felt like golden moments—mine only, mine alone. 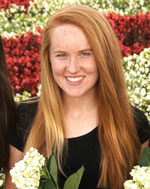 In December, on one of our last nights, I went out with friends to dinner and then an enoteca, stopping for crepes, for gelato, in the strange state of mourning a city we hadn’t yet lost. I’d finished my last run the day before, a flat, simple course to Le Cascine, a park on the edge of the city that had felt like a slice of Paris—wide paths through copses of slender trees, grass fields where soccer goals stood empty or a solitary dog and owner frolicked in the dew—Florence hiding its surprises until the very end. Already, I missed my Florence-at-dawn, my runner’s city that, after a rocky start, had opened itself to me in its own way.

That night, my roommate and I stopped, suddenly uncertain of the way home. I felt the familiar panic of being lost and remembered that first morning, now more comical than frightening, a girl floundering and not yet finding her way. Then I caught sight of a darkened bakery, then a storefront, looking out at me like familiar faces in a crowd. “It’s OK,” I said, feeling the rare hum of recognition, stepping forward to lead the way. “I know where we are. I’ve run here before.”

Maggie Ryan, ’17, is an English major and Italian minor who loves writing fiction, staying fit and eating Italian food, and wishes those last two were more compatible. Wherever she ends up after graduation, she hopes it will be runner-friendly.

The Fight for Fair Play

For more than 70 years, expectations for Stanford's female athletes was meager, until a 1972 law changed everything. Here's the story of Stanford women who toiled in obscurity until, finally, they didn't.

Is This McCaffrey's Year?

Stanford’s history of accomplishment inspires a new era of leadership.