For a cause, a marathon on every continent. 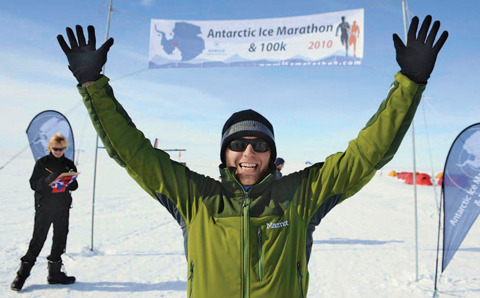 You know that stab of discomfort you get when you hear about someone much younger than you who has accomplished something extraordinary, some over-the-top pursuit that dwarfs your own experience? Well, prepare to feel inadequate.

Kiefer, a rising senior, is a congenial lad from South Dakota, the first in his family to attend college. When he completed the Antarctic Ice Marathon in December, he became the youngest American male to run a marathon on all seven continents. His motivation wasn't a place in the Guinness World Records book but to raise money and awareness for Gumball Capital, a fledgling nonprofit whose dual aims are to nurture entrepreneurs and help poor people in developing countries. Its signature is the annual Gumball Challenge, in which student participants develop a business plan using $27 and 27 gumballs. Proceeds from the contest are given to a microfinance organization such as Kiva. Gumball events will be held at 50 colleges this spring, including schools in India, Brazil and Peru. The company needed to raise money to fund those events, Kiefer says.

He settled on the idea of running marathons to attract donors when a friend last year offered him $5 every day he ran.

To prepare, Kiefer developed an unusual training regimen: He pulled a treadmill into a Stanford meat locker and ran for hours at a time. As it turned out, his biggest obstacle wasn't the cold—the race-day temperature was a relatively balmy 5 degrees, with very little wind—but rather the treacherous footing. "I should have trained by running in sand," he says.

Thanks in large part to Kiefer's efforts, Gumball Capital has enough money to operate its challenges this spring. And someday soon, Kiva, founded by Matt Flannery, '00, MA '01, and Jessica Jackley Flannery, MBA '07, will receive another check.

Worlds of Her Making

Whether she's creating a bright scarf or a crushing boulder, movie designer Suttirat Larlarb specializes in the totally convincing.