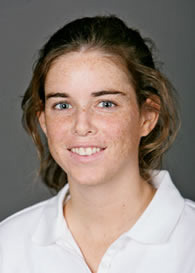 Kelly McKenna exudes energy, and that's hardly surprising. A three-time All-American sailor, McKenna is driven by that familiar form of Stanford propulsion: ferocious motivation to achieve, to the point that it almost resembles overachievement. She walked onto the team at Stanford with minimal expectations and ended up making a powerful splash throughout the athletic department as well as in sports.

Her energy level provides the perfect touch of irony for the full story behind her accomplishments. McKenna, who graduated in the spring but maintains some close ties to Stanford, has celiac sprue, a disease created by a toxic reaction to gluten (a protein substance in grains) and with the potential to cause a variety of serious medical problems if untreated. McKenna was diagnosed in high school, but not before she was beset by what seemed to be a cruelly mysterious lethargy.

Although she was persisting in all her activities, including playing on the school tennis team, she was falling asleep in class and doing something extraordinarily un-Kelly-like—complaining about how she felt. Teachers and coaches were beginning to ask if she was OK. Her mother, Molly, vividly remembers the news from the pediatrician after an initial examination and testing: "He said, 'You've got a very sick kid.'"

Then things got worse. Although celiac disease is not rare—McKenna cites an estimate that puts the rate at 1 in every 133 people—it wasn't anything doctors first suspected in this case. McKenna, then 16, had become severely anemic, as some celiac sufferers do, but the speculation about the cause ranged from the possibility of cancer to the implication that she had an eating disorder she was hiding. "It was kind of a horrible time in my life," says McKenna. "I would leave the doctor's office in tears."

The correct diagnosis wasn't made until after her mother read a magazine article on celiac disease in a physician's waiting room. At first, recalls Molly, doctors brushed off her suggestion that the described symptoms were a match for Kelly's. But she was the best observer of what her daughter had been going through and pressed the issue until Kelly was tested. Kelly's younger sister Laura, a member of U.S. Sailing's 2009 Youth World Team and a freshman at Boston College, also turned out to have active celiac disease.

Once the disease was identified, McKenna got healthier at a steady pace. She says she is now rigorous about maintaining a gluten-free diet—not easy, given that gluten can be present in a huge variety of prepared foods, including such temptations as ice cream and candy. When Laura competed this summer in a variety of sailing competitions in Europe, including Kiel Week in Germany, Kelly accompanied her. "I came to support her on many levels,'' she wrote in an email during a trip to Italy, "but cooking for her and making sure she could have the right food was a big part of it. I cooked and baked for her every day in Germany."

McKenna talks about her sister's athleticism with an exuberant admiration. Indeed, there's a special sweetness to her fervor when contrasted with how temperate she is in talking about herself. Fact is, her Stanford career was replete with exhilarating honors, including the Bill Walsh Leadership Award, presented to her in June. It goes to "the student-athlete who most effectively inspires his/her team and the Stanford campus and community through exemplary commitment, service, composure and integrity." In a modest tone but with an obvious sense of fulfillment, McKenna says that award is special to her.

Her repeated selection as a sailing All-American from the crew position is nearly as noteworthy. The sport is overseen not by the NCAA but by the Inter-Collegiate Sailing Association of North America, whose officials argue that the most difficult All-American list to make—of any kind—is the one for crew. Those athletes, who compete alongside skippers in two-person boats and control the jib (sail), vie to make a single list of no more than 20 honorees from among all male and female contenders. By comparison, there are multiple lists for male and female skippers receiving either full or honorable mention All-American designation. As many as 40 skippers can be named.

McKenna's passion for sailing is probably roughly equivalent to her intensity about raising awareness of celiac disease. She started in high school, with help from Stanford chemical engineering professor Chaitan Khosla, by creating an information CD-ROM aimed at medical students. And she's working this summer for the Khosla-founded Celiac Sprue Research Foundation, whose president is gastroenterologist Gary M. Gray, professor of medicine at Stanford.

"I've worked with Kelly from time to time over the past five years on several celiac-related projects," Khosla notes. "She has no fear, and brings an enormous intellect and passion to this cause. As a result she has made a difference in many ways, and I'm sure that this is only the beginning of much more to come."

Writing for a soap opera teaches you to love the impossible.

Penciling in a Career

In children's books, Betsy Franco found the career that worked with motherhood.