Should We Abolish the Electoral College? 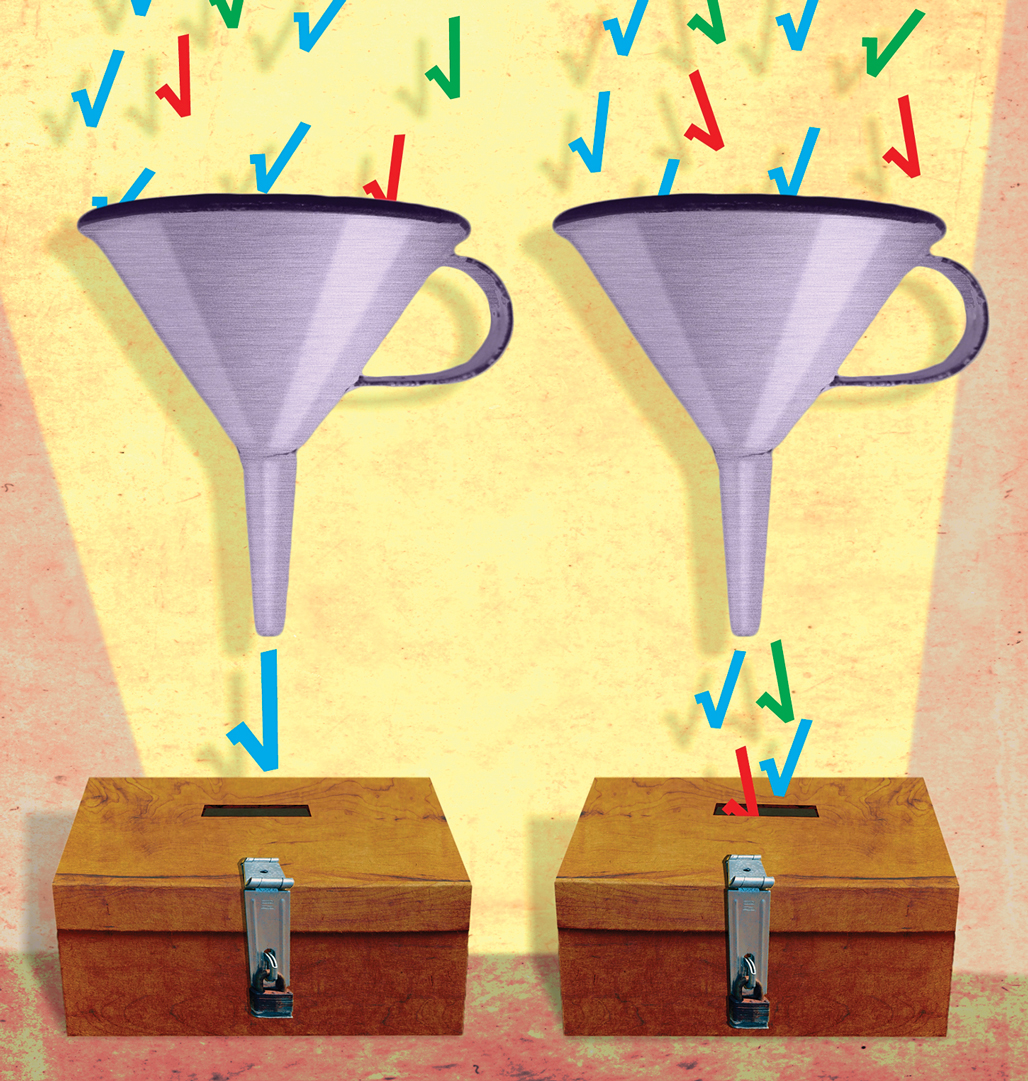 Editor’s Note: In 2016, we asked two professors to debate whether the Electoral College should cease to be the mechanism used for selecting the U.S. president. Here are the yea and the nay.

By Jack Rakove, the William Robertson Coe Professor of History and American Studies and a professor of political science.

In this extraordinarily strange election year, debating the Electoral College might seem an odd pastime when so many other issues concern us. But its logic, its distortion of the democratic process and its underlying flaws will still strongly influence the conduct of the election. So, let me make the case for its abolition and its replacement by a simple national popular vote, to be held in an entity we will call (what the heck) the United States of America.

There are three basic arguments in favor of the system the framers of the Constitution gave us, with little sense of how it would actually work. The first is easily dismissed. Presidential electors are not more qualified than other citizens to determine who should head the government. They are simply party loyalists who do not deliberate about anything more than where to eat lunch.

A second argument holds less populous states deserve the further electoral weight they gain through the “senatorial bump” giving each state two electors, because their minority status entitles them to additional political protection. But the real interests of small-state voters are never determined by the relative size of the population of their states. If, say, environmental sustainability or abortion or the Second Amendment is your dominant concern, it does not matter whether you live in Wyoming or California, Pennsylvania or Delaware. The size of a state does not affect our real political preferences, even though the Electoral College system imagines that it does.

Third, defenders of the Electoral College also claim that it supports the underlying value of federalism. Having the states play an autonomous role in presidential elections, it is said, reinforces the division of governing authority between the nation and the states. But explaining exactly how it does this remains a mystery. Having a state-based system for electing both houses of Congress should be adequate to that task. Presidential elections have little if anything to do with the subject, even when some candidates claim to be “running against Washington.”

What are the positive arguments in favor of replacing the existing electoral system with a national popular vote? Here, again, there are three main points to make.

Having the states play an autonomous role in presidential elections, it is said, reinforces the division of governing authority between the nation and the states. But explaining exactly how it does this remains a mystery.

First, and most obviously, such a system would conform to the dominant democratic value that has prevailed in American politics ever since the one-person, one-vote reapportionment rulings of the early 1960s. Our votes would count the same wherever they were cast. No other mode of presidential elections would be fully consistent with our underlying commitment to the equality of all citizens.

Second, a national popular vote would eliminate the “battleground state” phenomenon that has now become the key feature of post-convention campaigning, leaving most Americans alienated from the decisive phase of presidential elections. “Swing” or “battleground” states are mere accidents of geography. They do not matter because they have any special civic characteristics. They simply happen to be states that become competitive because of their demography, and which are readily identifiable as such because of the increasing sophistication of political polling. In a truly national election, parties and candidates would have the incentive to turn out their votes wherever they were, fostering a deeper sense of engagement across the whole population.

Third, a national election might provide a cure for the delegitimation of presidential authority that has afflicted the last three presidencies. It is no secret that the administrations of Bill Clinton, George W. Bush and Barack Obama all suffered, from the outset, from efforts to imply that there was something improper and unworthy or even suspicious in their elections. That same view will doubtless color the 2016 election as well. This perception is reinforced by the red- and blue-state imagery that controls our view of the electoral process. Having an election in which victory went to a candidate carrying a single national constituency might not wholly cure this problem, but it might well work to mitigate it.

By Michael W. McConnell, the Richard and Frances Mallery Professor of Law, director of the Constitutional Law Center and a senior fellow at the Hoover Institution.

The Electoral College is not going to be changed, and there are far more urgent and promising topics for reform of our presidential selection system.

It is true that the Electoral College no longer serves its original purposes, and that it creates a grave risk that a candidate not favored by a majority of the people will, from time to time, be elected president. There have been three: John Quincy Adams, Benjamin Harrison and George W. Bush. We survived. Not one was a first-rank president, but their selection did not seriously injure the democratic character of our system.

The founders opted for the Electoral College because the two leading alternatives, election by Congress and by popular vote, were thought to have serious defects. Moreover, the electoral college method preserved the two compromises over representation—the three-fifths clause and the big state-small state compromise—and guarded against a fracturing of votes for many candidates, which they thought might occur once George Washington was no longer available as a nationally respected consensus candidate. The three-fifths clause became irrelevant with the end of slavery (thankfully!), and the big state-small state divide no longer animates our politics, if it ever did. The two-party system solves the fractured vote problem more effectively than the Electoral College ever did, and the electors never exercised genuine independence. The Electoral College thus presents democratic risks without serving any of its original purposes.

That is not to say the Electoral College is without its advantages. It gives a slight edge to candidates with broad-based support in many states over those who rack up huge majorities in just a few large states. That probably promotes a more national and less regional vision. It channels presidential politics into a two-party system, which is superior to multiparty systems where fringe factions can exercise too much leverage. It probably reduces the cost of presidential campaigns by confining television advertising to the battleground states (and spares the rest of us the tedium of endless repetitive ads). And it confines vote-counting disputes to just one, or maybe a few, states. Imagine a Florida-style recount in every precinct in America.

Still, the advantages are uncertain and relatively minor. Almost no one would adopt an Electoral College today if we were starting from scratch. But reforming the Electoral College does not rank high among our national problems. Given that a change would require a two-thirds vote of both houses of Congress and three-quarters of the state legislatures, it is not going to happen. We should be talking about other things.

The great problems with our presidential selection system today stem from the haphazard way we choose the two major party presidential candidates. This year is the poster child for the need for reform. The two parties have chosen the same year in which to nominate a person whom large numbers of Americans, probably a majority, regard as unfit (though not for the same reason). Generally, we count on the Republican and Democratic parties to nominate not the best people, but candidates who combine a degree of popular support with the experience and temperament to govern. Not this year.

We need to think hard, and quickly, about how to reform three aspects of the presidential nomination process: the debates, the primary elections and the conventions. The current system is weighted too heavily in favor of celebrity appeal, demagogic displays and appeals to narrow special interests. The party structures—which, for all their faults, have a vested interest in candidates from the moderate middle who are able to work with Congress and other officials to govern—have been sidelined.

For almost the first half century of the republic, presidential candidates were chosen by the caucuses of the two parties in the House and the Senate. That system worked well until the two-party system briefly died with the Federalist Party. It was replaced by party conventions, which eventually were replaced (almost) with strings of single or multiple state primaries and caucuses. It seems to me that the original system may have been superior to what we now have. The elected officials of both parties have incentives to choose candidates with an eye toward popular electability and governing skill. Interestingly, the congressional caucus system is very close to the system the British used to replace Prime Minister David Cameron. Most Americans would breathe a sigh of relief, I believe, if we had a system capable of choosing the U.S. equivalent of Theresa May instead of Donald Trump or Hillary Clinton. Now is the time for sober and spirited citizens from both parties to devise a new system for 2020.

An Existential Moment for Democracy?

As American leadership falters, scholars say, autocrats are on the rise.

How to Build a Movement

Social change can seem sudden, as if millions awoke one day to the same realization. But really, scholars say, consensus is constructed through thousands of small acts over generations.