A documentary by two graduates of Stanford’s film program, Ferne Pearlstein, MA ’94, and her husband, Robert Edwards, MA ’96, will air on most PBS stations at 10 p.m. June 8 as part of the Independent Lens series. Sumo East and West looks at how the sport’s increasing popularity among Americans is affecting Japanese tradition. Pearlstein recently won the 2004 Sundance award for excellence in cinematography for her work on Imelda, directed by alum Ramona Diaz, MA ’95. 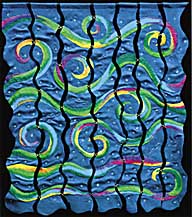 Mindful of the old saw that honey draws more flies than vinegar, Linda Gass uses lush, colorful works of art to attract attention to conservation issues. At first glance, Gass’s silk wall hangings, art quilts and mixed-media collages are striking representations of skies, rivers and deserts. Closer inspection reveals panel edges that are unstitched and fraying or mended with hand stitching, to symbolize the despoiling of nature and the possibility of repair. As a Californian, Gass, ’81, MS ’83, often focuses on the use and abuse of natural waterways; a recent solo show was titled “No Swimming.”

Textile art is her second career, launched a decade ago. A math major with a master’s in computer science —she also squeezed in fine arts courses—Gass worked in software development for 10 years. She exhibits regularly in juried shows and galleries across the country, and her work has been featured in numerous books on fiber art and quilting. The Los Altos resident also designs clothing and accessories. For inspiration, she frequents Western wilderness areas.

Star sluggers look to the Series.

Robbie Conal puts a kinder face on his portraiture.

In China, a Seat at the Table

Our Beijing program is Stanford s latest foray into the booming country.