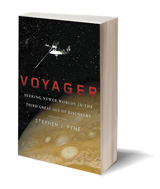 In 1977, the twin spacecraft Voyagers 1 and 2 lifted off from Florida's Cape Canaveral, headed for a "Grand Tour" of the outer planets. Thirty-three years later they're still out there, having reached Jupiter, Saturn, Uranus and Neptune and sent back data from what Pyne calls "one stunning encounter after another." Readers will learn much about the plucky Voyagers, but the true pleasure of Pyne's book is his interest in exploration itself. The space probes' heritage, he says, can be found in Renaissance journeys of discovery, the travels of Lewis and Clark, and the polar missions of the early 1900s. Voyager mixes science, history and politics (even Columbus needed funding) with the exhilaration of breaching frontiers.

There's nothing flamboyant about Horack's style, but with quiet purpose and straightforward prose he has written a startling and engrossing novel. Set in the early 1800s, it's the story of a Pygmy whose family is killed by a rival African tribe that then sells him into slavery. Smart and sorrowful Kau is taken to America, where he escapes and begins a perilous quest for life as a free man. Horack, a Stegner fellow from 2006 to 2008, makes Kau and his strange odyssey as real as Florida heat.

Mice not only giggle, they sing. (If we could hear them—the frequency is too high—they'd sound like songbirds.) Snails carry on courtships. Fish like the music of Mozart. And creatures can sense looming disaster: More than 35,000 people died in the 2004 tsunami in Sri Lanka, but perplexed officials found hardly any animal casualties. A thought-provoking look at what science reveals about how animals relate to the world we share.

Jay Gatsby is dead. Daisy Buchanan is plump. Nick Carraway has left West Egg for good. But Tom Buchanan, the racist, philandering husband in F. Scott Fitzgerald's The Great Gatsby, hasn't changed much in the years that separate that novel from this one. Here Tom describes his efforts to defend his financial interests in politically unstable Nicaragua in 1924. He's funnier and smarter, but a lout just the same. Rauchway is a history professor at UC-Davis.

Krauss's third novel centers on an enormous desk—one of its 19 drawers has been locked for six decades—and the tangled succession of people who acquired it after it was plundered from the Budapest home of a Jewish scholar during the Holocaust. A meditation on the "crippling burden of memory," the book is suspenseful and enigmatic, with an ending that offers a measure of peace to its characters and to readers as well.

"La vie boheme" began in Paris in the mid-19th century, then spread to New York and San Francisco. Levin follows it into the 20th century, noting its complexities and controversies. "[Bohemia's] denizens are clad loosely—seedily, in the vulgate—and they are shaggy as to the head, with abounding hair," said Harper's magazine in 1859. "Whatever is not 'respectable' they are."

'California is America writ early. Its civic diseases cross the Sierra Nevada or the Colorado River as easily as its blockbusters, gadgets and cabernet.'

Anne Stephenson is a former book columnist with the Arizona Republic in Phoenix.