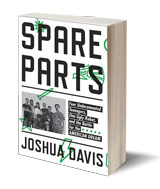 Davis details the unlikely true story of a group of underprivileged Mexican-American high school students who enter a top-level collegiate robotics competition. Guided by two of their teachers, the boys find themselves scrounging parts, dodging immigration checkpoints and raising travel money in order to chase their dreams. Their story will also be told on the big screen: The movie Spare Parts (starring Jamie Lee Curtis, George Lopez and Marisa Tomei) opens in theaters on January 16.

I saw it far out on the horizon, a blinding light. As it came closer, I
realized it was a magnificent sailing ship made completely of glass—glass
sails, mast, hull—a dazzling spectacle in the sun. At times, the glass ship
reflected rainbow lights like a crystal. I had heard stories of this legendary
ship, though no one I knew had ever seen it, but here it was, bearing down
on me in my small boat.

I looked up at the now-looming ship and spotted a young man and
woman on the deck, dressed completely in white. They were dancing,
whirling slowly, waltzing, to be exact. I saw one face, then another, and
was astonished to recognize my own parents. A longing arose in me, and I
called out to them. They stopped and looked down at me curiously—
my father with his slicked-back hair, my mother with her black curly bob
—and did not seem to recognize their daughter. They resumed
their positions, waltzing around the glass deck, a whirl of white,
transfixed only by each other.

Gradually, I realized why they did not recognize me. I had not yet been
born. Here were my parents deeply in love before they were married, before
the four children began to come, before the toil of creating a home.

The glass ship sailed off with my dancing parents. Its wake caused a slight
rocking of my small skin boat before I was left alone on the still sea.

There's no reason to view Roman contributions to literature and arts in the shadow of their Greek predecessors. Kellogg profiles Plautus, Virgil, Ovid, Marcus Aurelius and others whose ideas continue to resonate.

"The demographic and ideological makeup of today's GOP will make it very hard to turn the Republican ship around anytime soon."

Drawing inspiration from her family members' diaries about wartime experiences, Stallings tells a story of espionage operations in occupied Italy from the perspective of an American commando serving with rural Italian partisans.

Mondrian's body of work has influenced visual culture far beyond the Dutch artist's lifetime. Troy, a professor of art and art history, explores the narratives that have arisen around it and "the myriad ways that adaptations made Mondrian and his work accessible to broad, popular audiences after his death."

In Dugoni's newest thriller, a 20-year-old murder case is thrust back into the spotlight when a lake's receding waters expose a grisly scene. New evidence suggests that an innocent man was convicted, and the victim's detective sister sets out to find the real killer.

There's plenty of mischief within the confines of the Cherry Street Children's Home, but you can't pin it all on the little ones. Trouble brews when 6-year-old Caro and her kindly rodent companion stumble upon the plans of a scheming headmistress and crooked authorities in this lively tale set in 1949 Philadelphia.

Cognitively, "we're programmed to be lazy," writes Pollack—we process external stimuli by building patterns of recognition, interpreting the world through analogy. Analyses of historic and everyday uses of the device show its value beyond the simple "A is to B as C is to D."

Annie Black, married with a son, two daughters and a career, searches for meaning behind her feelings for a former lover, a desire she's kept hidden for 20 years. But her foray into the past reveals a knot of family problems she'd never imagined existed.

Holding On by a Thread

A sociologist at the Michelle R. Clayman Institute for Gender Research, Cooper interviewed 50 poor, middle-class and affluent families living in Silicon Valley, where the rapid rise in income inequality shows no sign of abating. Through case studies, she chronicles their disparate financial hopes and fears, as well as their emotional and practical survival strategies—whether they're upscaling in an effort to secure their financial position or downscaling to conserve their resources.

Strategic Intelligence in the Cold War and Beyond, JEFFERSON ADAMS, '64; Routledge, $34.95.

Plants, Stars and the Origins of Religion: With a Decipherment of the Phaistos Disk, MARY KILBOURNE MATOSSIAN, '51, PhD '55; Mill City Press, $24.99.

A Daily Dose of Perspective

The newspaper's archive reminds us how far we've come.