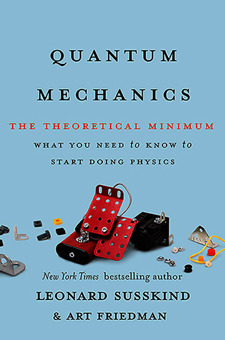 When people say "it's not rocket science" to indicate the ease of some task by comparison, it's a bit of an undersell. Jet propulsion after all hews to the laws of classical mechanics, which, physics professor Susskind notes, feel intuitive to humans because we employ them daily—and have for millennia. With quantum mechanics, "the only way we can comprehend it is by rewiring our intuitions with abstract mathematics." This book, the second in the Theoretical Minimum series based on a Stanford Continuing Education course of the same name, aims to make the process as enjoyable as possible. 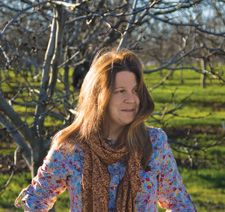 When I was a little girl, all the time,
people asked me why I was sad.
I befriended a slug the same size
as my finger, but colder.
I followed the sound of my mother's keys.
When they went dark places, I hid.
My father bought baby roses
home for my mother: an anniversary.
I was sure they were for my teacher,
who held my hand when I wrote
the alphabet, but said good work
like what I did was mine.
In a warm climate, a longing for rain
came to me immediately.
Answering no question,
I was trying to be what they saw.

In her debut picture book, artist Hurley follows a pair of robins preparing to become a family of three. Seasons pass as their fledgling learns to navigate its new world, pulling worms and evading a curious cat. And before long, their family circle grows. Cozy, colorful vignettes illustrate this universal story that never grows old.

Those who shy away from stories about adversity may miss this surprisingly uplifting account of grief and self-discovery by Evans, a Jones Lecturer and former Stegner fellow (2008-10). When Evans finds his wife after the couple become separated on a hiking trip, he can only watch as she is killed by a brown bear. Recounting the attack and its aftermath with raw honesty and detail, Evans shares a tale of love, marriage and redemption that will satisfy even those who insist on happy endings.

"I didn't mourn or miss my family, yet I couldn't bear the thought that the tale of their drowning might end up for sale on the sidewalk outside Zabar's, or in paperback at Duane Reade, next to the cough drops."

One daughter's luck is another's loss in this first novel by Ma. Identity crises and unhappy family dynamics surround Ari Kong and the two generations of Kong women who love and suffer with her. Born (and abandoned) in Kunming, China, and raised in San Francisco, Ari becomes obsessed with identity and intent on self-destruction. The ways in which her adoptive single mother, aunt and grandmother deal with her struggles and their own are uniquely articulated and refreshing.

This is a cautionary account of the downfall of Capt. David Porter, an audacious American frigate commander in the War of 1812. Porter's craving for glory cost him not only his ship but also his naval career, and more than two-thirds of his crew lost their lives. "No one ever questioned his exceptional talents as an officer," writes Daughan, but "outsized ambition and excessive pride" led to his undoing.

The authors argue that many rules of leadership are valid even while their opposite is as well. Examples from the classics, business, the military and even Hollywood underscore the importance of context and timing. "Leaders learn to cope with contradictions," they write. "Effective leaders learn to exploit contrary and divergent forces."

The title is a reference to the spread of all things kawaii, or cute, from Japan to the rest of the world, with the iconic feline as its famously mouthless face. Through interviews with Hello Kitty fans, Sanrio employees and even critics, Yano explores the longevity and marketing genius of the 40-year-old character. An alluring antithesis of Barbie and Disney princesses, Hello Kitty is a niche-transcending blend of cute and cool—and ultimately "neither Japanese nor a cat."

Olukotun turns the concept of brain drain on its head with a novel that posits its opposite: brain gain. An enterprising Nigerian government official devises a plan to plant the country's flag on the moon; meanwhile, lunar rock geologist Dr. Wale Olufunmi receives a mysterious letter that seduces him into stealing a sample of moon dust from his lab in Houston and returning to his homeland. Part noir, part thriller, this sharply written novel addresses displacement on multiple levels and portrays postcolonial Africa as a paradox of enduring hope and broken promises.

"What makes life meaningful is love. The right that makes us human is the right to love. To criminalize the expression of that right is profoundly cruel and inhumane. To acquiesce in such criminalization or, worse, to recriminalize it is to display the very opposite of compassion." —LEILA SETH, mother of Vikram Seth, in "India: You're Criminal if Gay," the Times of India.

Through love's great power to be made whole
In mind and body, heart and soul—
Through freedom to find joy, or be
By dint of joy itself set free
In love and in companionhood:
This is the true and natural good.

To undo justice, and to seek
To quash the rights that guard the weak—
To sneer at love, and wrench apart
The bonds of body, mind and heart
With specious reason and no rhyme:
This is the true unnatural crime.

—"Through Love's Great Power" by VIKRAM SETH, MA '79, in the New York Review of Books.


The following did not appear in the print version of Stanford.

Ready to Be a Thought Leader? How to Increase Your Influence, Impact, and Success, DENISE BROSSEAU, MBA '93; Jossey-Bass, $27.99.

Allied to Win: How I Launched and Led a Leading Ecommerce Company, EDWARD STEVENS, '92; self-published, free.

Why you should stop sweating everyday aggravations and embrace the benefits of stress.

The devil finds work for idle hands to do.'