See You in the Fashion Pages 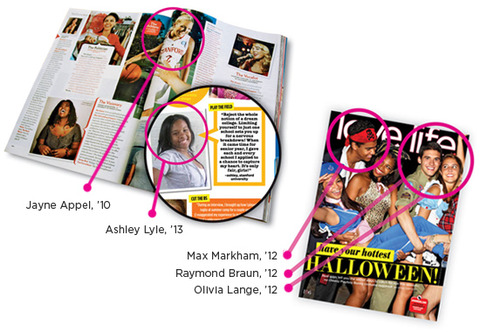 Stanford was all over the newsstands this fall with students featured prominently in two popular women's magazines. Basketball star Jayne Appel, '10, was named one of Glamour's Top 10 College Women of 2009. She appeared in a spread in the October issue of the magazine alongside other "budding leaders" in various fields. A psychology major, 21-year-old Appel spoke of her plans to graduate early to prepare for her dual dreams: to play for the WNBA and pursue a career in mental health advocacy. Previous winners of the annual competition include Martha Stewart in 1961 and novelist Curtis Sittenfeld, '97, in 1996.

Ashley Lyle, '13, was selected by Seventeen as one of 15 college women the magazine will follow throughout their freshman year. She was introduced in the October "Ultimate Guide to College" issue in an article written by Raymond Braun, '12. The Memphis, Tenn., native offered insight on getting into her dream college: "I gave each and every school I applied to a chance to capture my heart." Braun, who interned at Seventeen last summer, also interviewed Salina Truong, '11, for a service sidebar on how to pay for college and Alyssa Baldocchi, '11, for a brief item on how to tactfully turn down a drink. He appeared as a model with Olivia Lange and Max Markham, both '12, in a photo accompanying a piece about Halloween costume dos and don'ts. And John McCallen, '09, appeared in the November issue of Seventeen giving dating advice.

Tanks, for the Memories

The Things He Saw