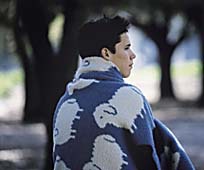 Each fall, a fresh crew of students arrives at Stanford to begin college. They bring with them faded blue jeans, brand-new computers and stiff-from-the-package extra-long twin sheets—along with the expectations of family members and their own hopes for success at Stanford and beyond.

Most also pack something else, some talisman to remind them of the past and support them through the future. These items might look simple—stuffed animals, photos of gleeful friends on prom night—but they contain powerful symbolism. They say: This is the person I was before I came to Stanford. These are the people I left behind. These memories make me who I am, and these experiences will carry me through whatever comes next. Here are the stories of seven freshmen and what they brought with them.

'For More than Just Warmth'

Call it the sheep blanket or, if you wish, “the Sheep.”

A blue knit throw—with six rows of white sheep and a row of black thrown in for good measure—has been Carlos Cabrera’s constant companion for as long as he can remember. He’s not sure who gave it to him, but he can remember wearing it into Burger King as a preschooler, bringing it on family car trips and draping it around his shoulders en route to Little League games. “The blanket is important to me because it has been with me my entire life,” Cabrera says. “I’ve always had it everywhere I went.”

That hasn’t changed since he arrived at Stanford. The lanky, 6-foot-2 Cabrera strolls the third floor of Burbank and attends dorm meetings with the somewhat weary accessory wrapped around his head and shoulders like a peasant woman’s babushka. “It’s for more than just warmth,” he says. “It’s for memories and fun.”

No worries about being teased for sporting his baby blanket on his head? “I didn’t really think people would make fun of me,” Cabrera says. “I do get teased a little bit, but it’s the funny kind of teasing. I don’t ever feel hurt or anything when people talk about it.” There’s only one person whose needling gets to Cabrera: his older brother, Danny. Luckily for Cabrera, Danny lives in Southern California.

Roxana Godinez’s prized possession isn’t something she packed herself. It’s a piece of lined notebook paper she found in her suitcase after she arrived at Casa Zapata. On it is a heart, drawn by her 6-year-old brother, Rumaldo. Inside the heart, he wrote “Mami Chula.” Godinez struggles to translate the phrase, a term of endearment without a precise English equivalent that hints at the motherly relationship she enjoys with the small boy with long eyelashes.

Little Rumaldo is one of eight younger siblings Godinez left behind when she came to the Farm. When she talks to them on the phone, “my youngest siblings always ask me where I am and why I don’t go back home,” she says. “When they ask me that, I wish I could just take a plane to L.A. and stay there for a few days. Listening to their voices makes me homesick, because I know that once I hang up the phone, their voices will be gone and it will be a few days until I hear them again.”

As the oldest child, Godinez helped raise several little ones, but she and Rumaldo, the youngest boy, have a special bond. “I only have that with him,” she says. “He’s always been my favorite.” She especially wants him to do well in school. “He was getting kind of lazy before I came to Stanford, so I talk to him over the phone and ask him how his studies are going and if he is doing his work.”

Too excited to keep his handiwork entirely a secret, Rumaldo kept asking Godinez if she had opened her suitcase as the pair rode from Los Angeles with their parents and two other siblings. “No, not yet, baby,” Godinez would answer. She suspected Rumaldo had done something mischievous. Instead, when she unpacked, she found the sweet note lying on top of her clothes. It’s now tucked in a drawer in her dorm room for safekeeping.

Daniel Stringer knew he’d miss his region’s distinctive cuisine. So he went to a grocery store near his home in Greensboro, N.C., and bought a supply of grits—probably the original Southern comfort food—to bring to campus.

The blue box filled with small instant packages of the grainy, corn-based cereal is enshrined on a shelf in Stringer’s room in Faisan. “Most of our family is from North Carolina, but I have an aunt in California, and we always teased her about some of the things she can’t get out here,” he says. “Now, [those things] remind me of home.”

Truth be told, Stringer doesn’t break into the box too often. It turns out that the dining hall does serve grits—albeit not as thick and toasty as he prefers and without the traditional cheese mixed in. Stringer also admits that most of the time, he’s “more of a cold-cereal guy.” His personal stash of grits occasionally comes in handy on the weekends when he gets hungry before the dining hall opens at 10:30 a.m.

Unfortunately for Stringer, the food item he really longs for can’t be stored on a shelf in his room. “North Carolina is a big barbecue state,” he says. “They try barbecue here, but it doesn’t exactly measure up, I don’t think.”

A Smiling Face in Times of Stress

When Albert Lin looks at the small yellow happy-face doll perched atop his computer, he remembers: it was about four years ago at the Circus, Circus hotel in Reno, Nev. Lin and his parents had joined their extended family for a reunion. At 10:30 or 11 one night—after the adults thought the kids were safely asleep—a pack of children headed down to the game area to try their luck. Lin played a ring-toss game over and over, spending about $8 and eventually winning five stuffed happy faces. He tossed one into his suitcase, figuring it might provide a pick-me-up during stressful moments.

Fast-forward to this fall: Lin was less than two weeks into his freshman year when his father died after a two-year bout with colon cancer. Lin was scheduled to fly back to Illinois to say goodbye a few days later.

When he woke up in his Burbank dorm room the morning after learning of his father’s death, the little yellow guy was the first thing Lin saw. “I thought instantly of my father’s reaction when he looked at it: laughing and smiling,” he says. “It reminds me of all the happy times I’ve shared with my dad—not just the Reno trip, but all the times we’ve had together and all the things we’ve done.” 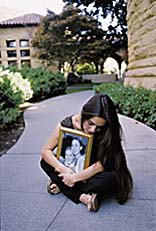 It’s one of those classic photos that say friendship. Eutimia Montoya, petite with the milky cocoa-colored skin of someone with Native American and Spanish roots, stands beside Sarah Shavel, a willowy, fair-skinned blonde girl she met while playing volleyball during her freshman year of high school. Shavel, 5-foot-6, is bending her knees far enough that the 5-foot-tall Montoya can rest her cheek against Shavel’s forehead. Montoya put the 8-by-10 black and white in the “pretty tacky” gold frame on her Twain windowsill immediately after arriving from their hometown of Denver.

The girls were inseparable—working as waitresses at a salsa lounge, writing essays about each other for English class and, above all, dancing together. Salsa, hip-hop, line dancing, lindy hop—you name it, they could do it. “We danced together everywhere,” Montoya says. “In the car while out to lunch, in the halls in school if we got the inclination, downtown on the street if we heard good music, and once just because I remembered this cool beat out of nowhere and I started to sing it. We were always partners, too,” she adds. “Sometimes, we’d go to a party and start the whole place dancing, and all the other girls would tell us how good we were and want us to teach them. We always had so much fun.”

Shavel also became part of the family, Montoya says. She began to pepper her speech with “Spanglish” expressions and joined the Montoyas for holidays, including Thanksgiving 2001, when the photo was taken. “We called her our golden Mexican child,” Montoya says, laughing.

Now Shavel is thousands of miles away, studying theater in London. The young women manage to speak by phone only once every two or three weeks. Montoya’s voice is wistful as she remembers her best friend: “Be sure to say how beautiful she is.”

Chronicle of a Journey

For four days shortly before he left for Stanford, Ryan McWilliams chose to be alone. He donned a backpack and trekked into the Beartooth Wilderness, about two hours from his home in Bozeman, Mont.

“I wanted to be in touch with Montana and the beauty of that place,” McWilliams says. “I just felt the need to be alone with my thoughts in kind of an intentional self-exploration before heading off to college.”

McWilliams hiked nearly 40 miles through dry shrubs, past alpine lakes and up steep mountain passes. It was his first solo backpacking trip. During his downtime, the aspiring fiction writer kept a journal and completed an outline of what he hopes will be a first novel.

Now that he has taken up residence in Burbank House, McWilliams turns to those writings to remind him of his journey. The thinking he did on the trip, he says, “has really allowed me to enjoy making the most of Stanford and its incredible breadth of opportunities—even if there aren’t any real mountains around here.”

Irene Guerra didn’t travel far to come to Stanford—just a couple of miles from her family’s East Palo Alto home. And the keepsake she brought to her Casa Zapata room isn’t fancy—it’s a stuffed doll won with a $5 investment at a county fair in Yuba City, Calif. But this is not just any doll. It’s Wonder Woman. The superhero, Guerra says, “reminds me that I have gotten this far and I can do anything.”

Guerra left the public school system after junior high to attend an exclusive private school in Los Altos Hills. Most of the students had been there for years, so Guerra felt very much a newcomer. Even small details surprised her. “Everyone left their backpacks in the open,” she remembers. “That was something that really shocked me. I wasn’t used to trusting people so much.”

Add to that academic difficulties, especially in math, and Guerra felt intimidated. “I was five steps behind everyone else,” she says. Her former school hadn’t offered pre-algebra, so she spent the summer before freshman year in a preparatory course, and struggled to earn C’s. But she learned how to ask questions and how to do the work. By the end of the academic year, she had boosted her math grade to an A.

Throughout high school, Guerra’s cousin Claudia, who is the same age and plans to attend California State University-Chico in January, cheered her on by phone. When the girls went to the fair near Claudia’s home in Live Oak last summer, Claudia spotted the doll tucked among teddy bears and stuffed footballs in a midway game booth. She thought it would be perfect for her Stanford-bound relative. “If you ever feel like you can’t do it,” Claudia said, “just grab the doll and let her fly.”

T.S. Eliot reading aloud, Eleanor Roosevelt's rallying cry, jazz from the hottest clubs of Harlem. In the basement of the music center sits a rare treasury of recordings where anyone can tune in to the past.

She Set Her Sights'

A visitor gets a kick out of cultural commingling.