Science in the Fast Lane

Editor's note: Since we published this story, remdesivir has been approved for emergency use against COVID-19. You can read the latest from Stanford Medicine here.

In late February, Benjamin Pinsky’s commute became unmanageable. He was readying Stanford’s Clinical Virology Laboratory for COVID-19 testing, and he received so many urgent calls each time he drove between his home in San Francisco and Stanford that, fearing an accident, he repeatedly pulled off the highway to discuss solutions with his team and reference information on his laptop. Finally, the associate professor of pathology gave up on the drive. For the first two weeks in March, as COVID-19 community transmissions increasingly made the news in the United States and the World Health Organization debated whether to announce a pandemic, he took a hotel room next to his lab.

Since January, Pinsky had been at the forefront of a vast collaborative effort to establish COVID-19 testing in the Bay Area—an endeavor paralleled by labs across the university working on testing for antibodies, assessing how those may confer immunity, developing treatments and addressing many of the other challenges presented by the virus. The race to respond to the pandemic may mark a watershed in how scientists mobilize and work together to face challenges, with the science of yore seeming as slow as lounge music by comparison. In a short time, the virus has already brought about regulatory changes and an unprecedented volume of publications, not to mention stories of perseverance and teamwork that scientists will be sharing for years to come.

In determining how to respond to the pandemic, the crucial first step was having an accurate and rapid test for COVID-19 infection. Medical personnel have to know who is infected in order to prevent the spread of the virus and protect not only other patients but also the hospital staff themselves. In the first weeks of 2020, as news of the virus struggled to keep pace with its spread, Pinsky began ordering supplies to create a test. “By February 4,” he says, “we actually started screening specimens that were negative for other respiratory viruses to kind of keep an eye on what was happening in our area with the idea that if we were to identify any positive patients, we would be able to ramp up testing relatively quickly.”

By February 29, the day the U.S. Food and Drug Administration relaxed requirements for clinical laboratory testing, Pinsky’s team had identified patient samples that were positive for COVID-19. The following Monday, his lab notified the FDA that they had completed requirements for testing. “They sent an email back that afternoon, saying, ‘You have permission from the FDA,’” he recalls—a process that would typically take several months or more. “We went live two days later,” he says, “on Wednesday”—just in time to respond to the rise in community transmissions in the Bay Area.

Pinsky refers to this period—when his lab was rushing to increase testing capacity for many hospitals in the region—as the “early days.” That was seven weeks ago. Since then, the lab has maintained the same pace, open 24 hours a day with three rotating shifts of dozens of scientists and assistants. Due to the high demand for equipment and supplies, the lab has repeatedly validated the test using different reagents—the chemicals used to perform the tests. “There was a shortage of the reagents,” Pinsky says. “We didn’t want to run out of any one particular component of the tests, so there was constant work to make sure we were able to continue to offer testing.” Other Stanford labs also rallied with donations of single-stranded DNA primers and RNA extraction kits. Says Pinsky: “There was a great outpouring of support from throughout campus to supply various reagents that we were having difficulty getting.”

Just as testing for the virus was increasingly available, one of the next most pressing questions was how to develop accurate screening for antibodies. Since numerous infected individuals appear to be asymptomatic—as many as 60 percent, by some estimates—reliable antibody testing is crucial for knowing not only which medical personnel might have developed immunity and can most safely work with patients, but also how widespread the virus is, what its actual death rate is and how far the United States might be from developing herd immunity.

Scott Boyd was well suited to the challenge of developing a clinical antibody test. A native of Winnipeg, Manitoba, he majored in biochemistry at the University of Manitoba before becoming a Rhodes Scholar and studying Renaissance literature at the University of Oxford—an experience he recalls as “a great chance to really broaden my education before I dove into medical academia,” which involved an MD at Harvard Medical School, a PhD at MIT and a postdoctoral fellowship at Stanford, where he is now an associate professor of pathology and an expert in antibodies. Like many of their colleagues since the pandemic began, he and research scientist Katharina Roeltgen spent day after 16-hour day in the lab. Their goal: to develop an antibody test that would offer greater accuracy than the many point-of-care and home testing kits in the marketplace.

“There’s quite a Wild West of testing going on right now,” Boyd says. “The majority of the tests really don’t seem to have much documented evidence of how well they work.” Though the FDA has eased rules regulating the sale of such tests to make them rapidly available, a good deal of money has been wasted on shoddy products. In late March, for instance, the British government purchased 3.5 million tests that then failed to give reliable results.

Boyd’s team released its test on April 6. In developing it, they kept the focus on maintaining standards—going through all the same steps and seeing how each version of the test performs—but doing more experiments each day. “It’s not that the methodology or the approach has changed,” he says. “It’s just that we’re having to do it more quickly than would be comfortable usually.” Adding to the discomfort, Boyd recalls his unease when he and Roeltgen, during one of their busiest, most exhausting periods, eased up on the social distancing to have meals delivered to the lab.

In conjunction with Pinsky and other collaborators, Boyd is now turning his attention to determining whether antibodies confer immunity. Since working directly with the COVID-19 virus is risky, a less dangerous virus will be genetically modified to express COVID-19’s spike: the prominent surface protein that binds with receptors on human cells to inject viral genetic material into them. “You can put that on a different virus,” Pinsky says. “It’s called pseudotyping, and then you use that in experiments to see if antibodies from patients will block the virus from getting into the cell.”

Just as research in diagnostics has been accelerating, so too have efforts on finding effective pharmaceutical treatment for patients with COVID-19. Clinical professor of medicine Neera Ahuja, division chief of hospital medicine and medical director of general inpatient medicine, is the principal investigator of a trial to treat severe cases of COVID-19 with remdesivir, an antiviral medication first used during the West African Ebola epidemic of 2013 to 2016. Remdesivir works by interrupting the genetic replication of viruses, and while it has shown promise at stopping COVID-19 infections in a trial sponsored by the drug’s maker, Gilead Sciences, and carried out at Stanford and other universities, more data is needed to show its effect on severely ill patients whose lungs are being destroyed by the extreme reaction of their immune systems. A new trial, initiated on March 30 and sponsored by the National Institutes of Health, will enroll more than 1,000 severely ill patients at Stanford and 63 other sites across the globe. “Time zones don’t matter when you’re trying to find a cure that’s affecting the world,” Ahuja says.

“What’s great,” says co-principal investigator and professor of medicine and of pediatrics Kari Nadeau, “is how fast the NIH was on its feet and how fast the FDA was to address the challenge of this crisis. It usually takes six months to get trials activated. This trial was activated in six days.” 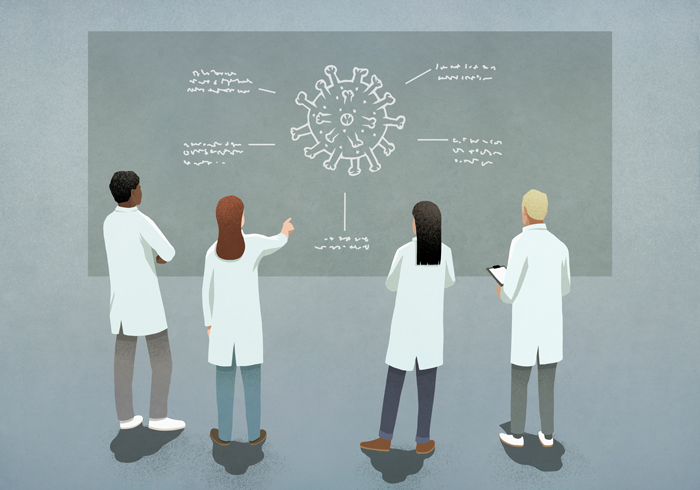 With equal speed, many of Stanford’s scientists have pivoted from their usual fields of study to focus on COVID-19, with as many as 50 researchers at a time on video calls briefing one another about the virus. “The COVID crisis motivated people to work together from many different areas,” says Nadeau, who directs the Sean N. Parker Center for Allergy and Asthma Research at Stanford and is best known for developing treatment for severe food allergies. “Even though our specialty areas might not be to work routinely with one another, most important is that our tools and our approaches are similar.”

As much as the virus has demanded collaboration and flexibility among investigators, it has required nimble mobilization and training of various hospital staff—a process that normally takes three months and that Ahuja and her team accomplished in three days so that the trial could proceed immediately. Innovating infection-control measures was paramount. “We thought about how we limit exposure of ourselves to this virus in the face of still needing to interface with the patient, address their concerns and monitor them,” Ahuja says. “We’ve been able to work with IT to have telemedicine consenting, electronic consenting, DocuSign and things like that. So it’s made it still just as efficient and effective but also limited exposure to the providers and conserved [personal protective equipment] when feasible.”

Among the striking changes in the pace of science that have affected both diagnostics and therapy has been the surge in preprints—academic papers posted online before they’ve been peer reviewed. In the short time since COVID-19’s appearance, as the global economy creaks and world leaders fret over solutions, scientists have already responded with 24,000 papers in order to share information and work at an unprecedented speed. “When the dust settles,” Nadeau says, “there probably will be some papers that contradict each other, but I truly believe that as long as the science was done rigorously, we have to give people the benefit of the doubt that they did their best to get their data out there quickly. But we do have to be careful in making sure we don’t read too much into a study that was done on a few patients or that was done without controls or was done with substandard tools.”

A recent New York Times article, “Coronavirus Tests Science’s Need for Speed Limits,” examines the impact of shoddy studies in preprint (one, for instance, fueled a conspiracy theory that the virus was engineered by the Chinese government for population control). And yet preprints have served a crucial role. To develop antibody testing, Boyd relied on an early preprint from a lab at Mount Sinai Hospital in New York. “Of course, we’re all supposed to look at preprints with extra scrutiny,” Boyd says, “almost as though you were the reviewer of the paper when reading it yourself.”

The stories of frantic work, sharing, collaboration and cross-disciplinary efforts are far more numerous than the few mentioned here. Take, for instance, how Stephen Quake, ’91, MS ’91, professor of bioengineering and of applied physics, loaded diagnostic equipment into his car at the Chan Zuckerberg BioHub, where he is co-president, and drove it to Pinsky’s lab. Or how David Camarillo, MS ’03, PhD ’08, associate professor of bioengineering, has shifted his research from preventing concussions to designing ventilators—required for severely ill COVID-19 patients—for rapid assembly from fewer parts. Collectively, these efforts suggest that among the mixed legacies of a deadly and devastating virus may be a scientific community primed for agility, rapid communication and cross-disciplinary innovation. In the meantime, as Nadeau points out, “None of these labs are getting sleep.”

Deni Ellis Béchard is a senior writer at Stanford. Email him at dbechard@stanford.edu