The debate over ROTC returning to campus was hot when it flared, but the issue wasn't the flashpoint some anticipated, as Stanford considered whether to invite back the Army, Navy or Air Force Reserve Officers' Training Corps programs.

While the Ad Hoc Committee on ROTC, chaired by psychology professor Ewart Thomas, worked on an advisory report to be delivered to the Faculty Senate by May 12, the issue stayed in the news mostly because of questions raised by groups such as Stanford Students for Queer Liberation and Stanford Says No to War. Prominent in the discussion were objections to ROTC based on the prohibition of transgender or transsexual individuals serving in the U.S. military, a ban that remained in place despite the repeal of the "don't ask, don't tell" policy that blocked openly gay individuals from serving.

Stanford's reconsideration of ROTC attracted extra attention due to similar debates at other high-profile universities. Harvard in March signed an agreement with the U.S. Navy to give ROTC an official presence on its campus after a four-decade banishment. Columbia University faculty voted to support a proposal to bring ROTC back. A Yale spokeswoman said the school was discussing with the military a possible return of ROTC.

While the debate at Columbia drew media attention for a town-hall meeting described as hostile to a veteran speaking on behalf of ROTC, at Stanford there seemed to be less engagement. Or possibly people with strong feelings were waiting for a more pivotal phase of the process.

Historian David Kennedy, '63, helped set in motion the University's reexamination of ROTC when he and former U.S. Secretary of Defense William Perry, '49, MS '50, addressed the Faculty Senate in early 2010 to make a case for educating "the citizen soldier." The ad-hoc committee was formed, but Kennedy observed "very little excitement to the discussion." With the acknowledgement that he was out of the country during some of the most public debate this year, he also was struck by "how restrained and unexcited the reaction at large has been in the community."

Todd Davies, associate director and lecturer in the symbolic systems program, has been outspoken in his opposition to ROTC. He believes the University community will be more vocal after the publication of the ad-hoc committee's investigation into the ramifications of any new relations with ROTC.

"It is true that attendance at meetings and rallies has been quite small," Davies wrote in an email interview. "In part, I think this is a function of the narrow framing of the debate, as one of whether ROTC students should take courses on campus or off campus . . . . A few students are passionate on one side or the other, but in my experience, the campus culture values unity and avoids conflict whenever possible. I don't see ROTC being discussed much in the dorm (Arroyo House) where I am a resident fellow."

Davies noted, however, that he understood dozens of letters have been written to the committee and that engagement with the debate eventually will become more obvious. "The debate in the full Senate," for example, "could be quite interesting." Chairman Thomas confirmed at the start of April that the committee had received 60 or more letters, with a "large fraction" from faculty. And an advisory vote was scheduled for early that month (past Stanford's press time) as part of the ASSU elections, asking students whether they supported or opposed reinstatement for ROTC.

Stanford eliminated on-campus ROTC programs in the early 1970s—ostensibly over concerns about academic rigor and curricular suitability—amid the protests against the Vietnam War. The 14 Stanford students currently on ROTC scholarships take classes and receive training at other Bay Area universities; some ROTC courses are hosted at Stanford, according to the University, without counting toward full-time registration or academic progress requirements.

Davies has multiple objections to ROTC, including what he contends are restrictive conditions that often are attached to the program's scholarships, limiting students' ability to change majors, pursue summer activities and, ultimately, enjoy the fullest range of career options.

The opponents citing the military's exclusion of transgender and transsexual individuals condemn that policy as no less discriminatory than "don't ask, don't tell." "Opposing ROTC sends a message that trans equality is important at universities," says Janani Balasubramanian, a junior who's a leader of Stanford Students for Queer Liberation and education director for the National Marriage Boycott at Stanford. Support for basic civil rights, she adds, "shouldn't be cast as an extremist or antimilitaristic position."

Alex Katz, a junior, was editor in chief of the Stanford Review when the publication ran a February editorial headlined "No Excuses Left for ROTC Ban." Among its assertions, reiterated by Katz in an interview, was that specific criticisms of ROTC are a mask for purely political opposition to anything associated with the military. 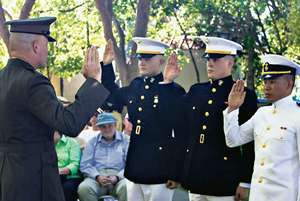 Katz says he views the possible return of ROTC as one of the "moderate mainstream" issues that get "branded as conservative because everything else is so tilted toward the liberal" at Stanford. He describes himself as sympathetic to complaints of discrimination by the armed services but argues that the most effective method of reform is to increase the military's exposure to people with progressive attitudes. "ROTC on Stanford's campus will ultimately further the transgender cause," Katz says.

Sam Windley, president of Stanford Says No to War, says his group is not reluctant to voice the conviction that, "We don't think the U.S. military is a force for good in the world" in its current state. There might be a number of more specific reasons for not reinstating ROTC, says Windley, a law student from Australia, but a preferred outcome would be a statement "that Stanford stands in opposition to the values of the U.S. military as it currently stands."