Root of the Rivalry 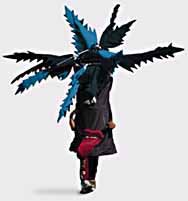 Don't mess with the Tree. That's the message from junior Evan Meagher, this year's incarnation of the Cardinal mascot. He is under the protection of a group of burly undergraduates who call themselves the TPG -- Tree Protection Gangstaz. His handmade costume (a palm, not the traditional redwood) is moved to a different "safe house" each night, and it's equipped with a global positioning device. "I can track the Tree at all times within a 1,000-mile radius," Meagher claims. The dancing shrub has reason for caution as the November 20 Big Game draws near. In recent years the rivalry with Cal has turned increasingly ugly. A rundown:

1998 Cal students steal the Tree costume. Threatened with arrest and a ban of Cal mascot Oski the Bear, they return the Tree three weeks before Big Game.

1997 Twenty-three are injured and six arrested when enraged Cal fans storm the Stanford Stadium field after a 21-20 Big Game loss.

1995 At a Stanford-Cal basketball game, the Tree and Oski are ejected for fighting.

1992 Cal fans pelt the Band with fruit, attack the Tree and tackle a Stanford yell leader.

She's in a Volume Business

After a cushy Napa Valley assignment, a young writer ponders his days of wine and poses.