Room with a Rue

Falling for an apartment in Paris means always having to say you're welcome. 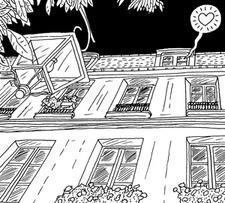 When I decided to become a Paris apartment owner, I fell in love with the first place I saw. In addition to seeming altogether perfect (400 square feet in a three-story building down a cobblestone passage; close to three Metro lines and the trendy Rue de Lappe), it has the most romantic address in the world. Cour Damoye was named for a city administrator from the 1700s, but—after an extra glass of red wine—the passage's name sounds more like Coeur d'Amour: Heart of Love. My building's name is Les Amoureux (Lovers), and the official legal description for the apartment is a lot number that would make you blush in any language.

Like the course of true love, Paris apartment ownership did not at first run smooth.

So-called "experts" whom I hired to help me with the place weren't much help. The property-search consultant who had promised to be there for me every step of the way left every important meeting early. One decorator proposed depicting the history of the French Revolution in this less-than-epic-sized space—and then he abandoned even a scaled-down version after a month. The next decorator, whom I nicknamed for her résumé's major accomplishment, warned me that if I wanted choices in the selection of the décor, it could cause problems. I did, and there were. Madame Pizza Hut threatened to sue me in France for triple her agreed-upon fee.

And when the work was done, the French rental agent advertised my apartment as his own, agreed to welcome smokers and pets (which I'd prohibited) and stole the sheets off the bed. Also, he found me no renters—or at least none that he told me about.

Still living in California, I decided to become my own rental agent—and share the apartment with short-term guests who could enjoy hard-earned sabbaticals, or celebrate romantic anniversaries, or relive Parisian memories of their youth. I've found it heartwarming to play a small role in their joy.

Cour Damoye renters have come from all over the world, although a large proportion are from California. Doctors, lawyers, educators, musicians, artists—they all have a story to tell, and (with just a little nudging by me) they have created some community among themselves. They don't meet in person unless they come to the annual Cour Damoye alumni reunions that I host in San Francisco. But they read and make entries in the apartment's guest journal, leave personal notes and small gifts for subsequent arrivals, and sometimes set up elaborate practical jokes.

Nearly two dozen renters have been Stanford alumni, and they have been among the apartment's most creative guests. For example, I told one renter, an economics professor, PhD '87, that her check-in date was also the birthday of my Filipino greeting assistant in Paris. She arrived at the apartment singing "Happy Birthday, Elmer" in Tagalog and also brought a cake and a gift of Filipino DVDs for him.

Another Stanford renter was a mystery author. He declined my suggestion that he base a novel on the apartment because he "would need a dead body." The renters there the week before him also were Stanford alumni and, with just the slightest hint from me, they etched a chalk outline of a dead body on the apartment floor. A note addressed to the writer's protagonist read, "Aidez-moi!"—"Help me!" The crowning touch was yellow crime-scene tape donated by three San Francisco female firefighters who had rented the apartment a few weeks earlier.

From day to day I never know who the next guests will be, or from what part of the world they will come. I never know what stories they will add to the apartment's history. But I know this magic is what I've come to like most about the Heart of Love, and why it seems the highest and best use of my Paris property.

JAN HANSON, JD '81, is an attorney and a photographer in San Francisco.

News from Another Side

Some Jewelry With That Party?