On June 15, 1892, shortly after Commencement, members of Stanford’s first graduating class met in the campus chapel to organize an official alumni association. In the constitution they signed that day, they declared that their intent was “to perpetuate a feeling of regard for one another, and of attachment to our Alma Mater.”

And so, the very next year, they organized a reunion.

In the early years, Stanford grads came together for Alumni Day, scheduled to coincide with the university’s Commencement ceremony. It was a decidedly tame affair: A few hundred alumni gathered to hear a lecture and vote on Alumni Association business. Before long, they’d added a baseball game. A hyped-up match between the pioneer class and graduating seniors was planned for the 1910 event, but a clipping in the Alumni Association’s logbook notes, “The much-heralded game was a farce, as Archie Rice’s fire-eating warriors of ’95 failed to appear.” (For all their bragging, the pioneers were demolished 9-4.)

1920s: It wasn’t long until reunions got a makeover: Renamed University Day, the new event took place in early May, the same weekend as a major track competition (usually Big Meet). Although the 1921 edition was fairly sedate—it featured a “rest period for the alumni” after a long afternoon of “general mingling and getting acquainted”—by 1922, it had transformed. Roughly 1,000 alumni returned to the Farm for concerts, campus tours and banquets. Declared the front page of the Daily Palo Alto: “Entire Campus Given Over to Old Timers.” 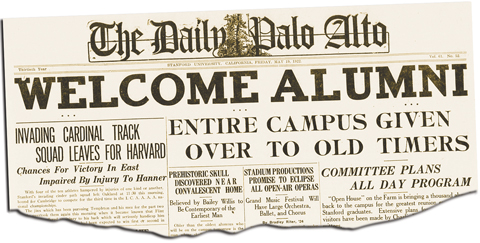 1940s: By the ’40s, schools around the country were hosting what we now think of as typical fall homecoming activities. In 1947, Stanford followed suit and announced its own fall celebration, complete with a dance, a parade and the 50th installment of Big Game. Although the new get-together quickly became the main reunion event, its spring counterpart carried on for years. Usually including luncheons and a track meet, it eventually grew to include barbecues, more baseball games, parades and, once, a European sports car show.

1960s: The early ’60s were a difficult time to be a Stanford football fan, but the alumni still turned out in force. The 1960 Homecoming proved memorable when 10,000 alumni showed up only to witness a lopsided loss to USC—the seventh defeat in what would become a winless season. Perhaps to drum up excitement after the lackluster on-field performances, the festivities ramped up a bit in the following years—such as in 1966, when Stanford elected its first homecoming queen. Annabelle Evans, ’68, won the crown from a pool of candidates provided by the football team. The fledgling tradition may have been Stanford’s shortest-lived, however, as it was abolished by student referendum just two weeks later. 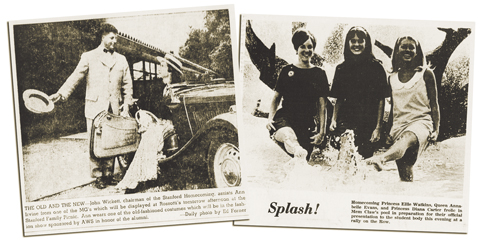 1980s: Class reunions were now sprawling across several weekends, so the Alumni Association consolidated them into one combined celebration for all alumni. In addition to new forums and parties, in 1993 and 1994, Reunion Homecoming featured an unforgettable ceremony for the 50-year returnees. Many members of the classes of ’43 and ’44 had shipped off to World War II immediately after spring quarter of their senior year, eventually receiving their Stanford diplomas through the mail, tucked into cardboard tubes. Half a century later, the university honored those veterans with a special Commencement in Frost Amphitheater to make up for the one they’d missed. In 1994, President Gerhard Casper said to them, “Among the developments that you could not possibly have imagined in 1944 is the fact that your degree would be conferred upon you publicly by somebody who in 1944 was a 6-year-old boy in Hamburg. . . . The poignancy of life is greater than one’s imagination.” 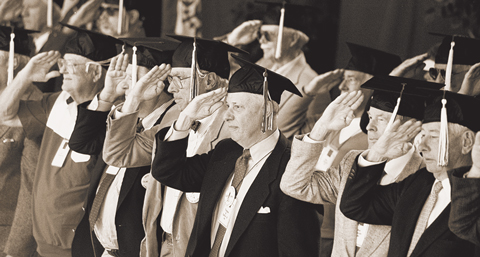 CLASS OF 1944: Veterans were honored at their 50th reunion with a Commencement ceremony. (Photo: Linda A. Cicero/Stanford News Service)

2000s: In 2004, Stanford became one of the first universities invited to join Facebook, when the start-up was still a Harvard dorm project. Over the next few years, as social media evolved into popular channels for keeping in touch, it wasn’t clear whether Reunion Homecoming would survive in the digital age. But as it turns out, “people still wanted to come meet face to face,” says Carolyn Manning, ’78, SAA’s vice president of alumni relations, adding that social media have proved to be quite complementary. Reunion attendance has spiked, especially among younger classes, jumping from about 20 percent of alumni attending their five-year reunions to approximately 60 percent.

What’s on the Menu?