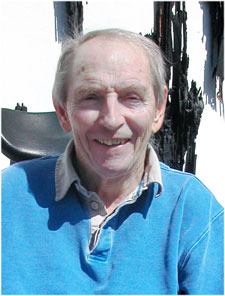 From 1966 to the early '90s, Professor Robert Tod Schimke could be seen playing football, basketball and even making human pyramids in Stanford's biology quad—when he wasn't revolutionizing studies in gene expression.

Born in Spokane, Wash., Schimke was exposed to science and the arts from an early age—his father was a dentist, and his mother was a pianist and piano teacher. School came easily to him, leaving him with plenty of time to develop his gifts for painting and getting into trouble. But his mischievous nature didn't keep him from excelling in the classroom, which led to a fruitful academic career at Stanford as a student and, later, a member of the faculty.

After completing a residency at Massachusetts General Hospital, Schimke worked at the National Institutes of Health in Bethesda, Md., before returning to Stanford. He was a prominent figure in the pharmacology department in the School of Medicine and the department of biological sciences, chairing the first from 1969 to 1972 and the second from 1978 to 1982.

Schimke is credited with multiple pioneering discoveries in biomedical science. In the 1960s he demonstrated that the rate of protein degradation in cells can be regulated, and, later, he and his colleagues provided evidence that cells become drug resistant by amplifying the number of copies of particular genes. This discovery, known as gene amplification, became hugely instrumental in cancer research and drug development. Schimke received numerous honors for his work, including the W.C. Rose Award in Biology and the Wallace E. Sterling Prize from Stanford School of Medicine. Despite these and other accolades, Schimke was proudest of having played a role in hiring the first four women faculty members in the biological sciences department.

In 1995, Schimke was hit by a car while bicycling, leaving him a quadriplegic. He was forced to give up his career in research, but after years of grueling rehabilitation, he regained partial mobility and shifted his focus to his other passion: art. Despite limited strength and movement, Schimke produced more than 400 works in a range of media, each piece capturing the intense energy and artistry he brought to every pursuit.

Patricia Jones, his wife and a professor of biology at Stanford, described him as "unusual, creative, sort of irreverent . . . very liberal-minded, very progressive, very fair," adding that, best of all, he was "lots of fun."

In addition to his wife of 22 years, Schimke is survived by his daughters, Caroline, Cynthia Ames and Allison Powers; and five grandchildren.

New dean and professor Jane Shaw continues her career of firsts in a field steeped in history and tradition.