Tired of partisan sloganeering over affirmative action? A book by former presidents of Princeton and Harvard offers more light than heat. 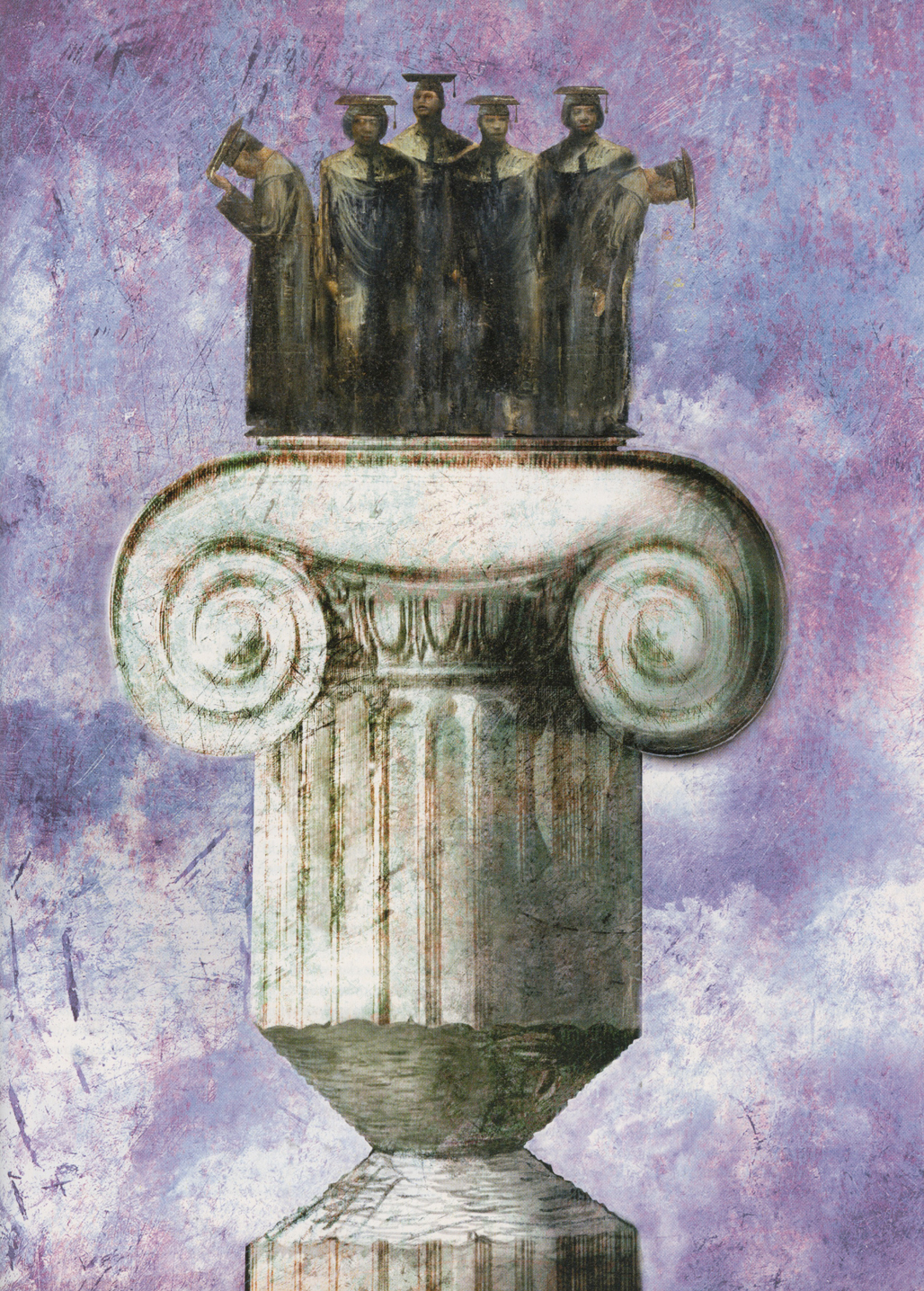 Nearly 60 percent of the voters in Washington state embraced a ballot initiative in November to end "preferential treatment" in state hiring, contracts and public education. Within days of that vote, the University of Washington announced it was suspending the use of race and gender in admissions. For those Americans who argue that race and gender should have no place in either hiring decisions or university admissions, the outcome in Washington was an important moral victory. It also provided them hope that the state initiative movement against affirmative action, which had been essentially moribund since Californians voted in 1996 to ban all consideration of race in public universities and state employment, may yet become a national force.

It's impossible to know at this point whether the results in Washington will jumpstart similar campaigns elsewhere. What is clear, however, is that affirmative action advocates have some hard days ahead. Race-conscious remedial policies, particularly at universities, are under more serious threat than at any time in their relatively short existence. That danger comes in part from legal challenges, which have already resulted in a federal court decision barring consideration of race and gender in university admissions in Texas, Mississippi and Louisiana. The more serious danger, however, may lie in a shift in the intellectual consensus—in the increasing acceptance of the view that affirmative action is passþ; that, good intentions notwithstanding, it is now doing more harm than good.

In The Shape of the River (Princeton University Press, 1998; $24.95) William G. Bowen and Derek Bok, '51, have produced a work that could serve as a much-needed curative to that perspective—if only those with loud voices and ill-informed convictions would read it and learn. Bok and Bowen explain clearly, and without recourse to partisan, knee-jerk sloganeering, just why it is that affirmative action in higher education has been so important—and why, in their opinion, it must continue.

The book squarely challenges the arguments made in The Bell Curve, the 1994 best-selling paean to high IQ scores written by Richard J. Hernnstein and Charles Murray. The Bell Curve ideal is a so-called meritocracy based almost solely on test scores. Unlike that book's authors and their acolytes, Bowen and Bok do not assume that test scores are destiny. While they acknowledge that scores are important, they argue that their importance frequently is overstated. Since blacks and Latinos, on average, score less well on standardized tests than whites, this point is crucial, given that a selection process based solely on tests would inevitably result in fewer blacks and Latinos attending "good" schools.

The Shape of the River, however, does not stop with that assertion. It advances the arguments for affirmative action in some very concrete ways. The backbone of the book is data (grades, SAT scores, class rank, etc.) collected on 93,660 full-time students of all races who entered 34 elite colleges and universities in 1951, 1976 and 1989. The authors focus in particular on 62,000 students who entered 28 of those institutions (including Stanford) in 1976 and 1989, when affirmative action programs were in place. The database links information such as SAT scores and college majors to experiences after college, including graduate and professional degrees, earnings and civic involvement. The study analyzes black and white students; differences in "cultures, backgrounds and circumstances" among Hispanics made it impossible to include them.

Bowen and Bok conclude that attending a highly selective school, regardless of test scores, gives one a huge advantage in life. They also conclude that, contrary to the theories of affirmative action foes, minority students with less-than-stellar test scores do better at institutions that are extremely challenging academically than at universities that are less demanding. "The fact that graduation rates increase as the selectivity of the college rises and that students of the same academic ability graduate at higher rates when they attend more selective institutions shows that carefully chosen minority students have not suffered from attending colleges heavily populated by white and Asian-American classmates with higher standardized test scores," write Bowen and Bok. "Quite the contrary—they have fared best in such settings." Moreover, those who attended the most selective institutions (whatever their test scores) were more likely than those who went to lesser schools to earn advanced degrees.

Beneficiaries of affirmative action have fared better not just academically but also economically. Although black males who entered selective schools in 1976 earned $17,000 a year less than their white counterparts, they earned nearly twice as much ($85,000 annually, on average) as black graduates of less rarefied institutions, and some $20,000 more than white graduates of less selective schools. And the more selective the school attended, the greater the financial reward.

It should be noted that the authors do not come to this debate as mere observers. Bowen, now president of the Andrew W. Mellon Foundation, is the former president of Princeton. Bok, a professor at the John F. Kennedy School of Government, is the former president of Harvard. Given their backgrounds—not to mention the controversial subject matter—the book has attracted notice. It's been reviewed in dozens of newspapers and magazines; William Safire, William Raspberry and Garry Wills devoted columns to the findings. The Los Angeles Times wrote that Bok and Bowen "prove with facts, not anecdotes, that affirmative action works." A New York Times reviewer was less generous, saying "what Bowen and Bok have proved is that going to a top college works. Their book unintentionally fuels rather than quenches the passions over affirmative actions."

Since Bowen and Bok each have a history of fighting for race-conscious policies in higher education, it is hardly surprising that The Shape of the River is a strong argument for maintaining affirmative action in college admissions. What is striking, however, is the care, both statistically and rhetorically, with which the authors build that argument. Instead of using fiery language to make their points, they layer statistic upon statistic (leavened with anecdotes from their own surveys) as they carefully demolish one anti-affirmative action shibboleth after another.

Take, for example, the oft-made suggestion that race-based preferences be replaced by class-based preferences. Bok and Bowen assert that this would not particularly benefit poor, deserving black students for the simple reason that there are so many more poor, deserving whites. "While it is true that black students are much more likely than white students to come from families of low socioeconomic status, there are almost six times as many white students as black students who both come from low-SES families and have test scores that are above the threshold for gaining admission to an academically selective college or university," they write. Worse, they argue, basing preferences solely on economic class would end up favoring lesser-qualified minority students over those with better qualifications, since academic preparation and economic status are linked among all groups.

The authors also dismiss the notion that blacks admitted through affirmative action suffer by being forced to compete in an arena for which they are unprepared. Anecdotal accounts of frustration and disappointment, they conclude, are no match for the overwhelmingly positive assessment most minority graduates report.

Likewise, Bok and Bowen reject the idea that white applicants pay a huge price because they are denied slots awarded to racial minorities through affirmative action. Eliminating racial preferences would not do much to help whites who are rejected for admission, they write: "Even if white students filled all the places created by reducing black enrollment, the overall white probability of admission would rise by only 1.5 percentage points: from 25 percent to 26.5 percent."

Conversely, the impact on blacks could be huge if affirmative action were abolished. Bowen and Bok estimate that black enrollment would drop by more than half if a strict race-neutral standard were applied to the group of selective schools they studied—and that the drop could be even higher at the most selective institutions.

What would this mean for society? The authors attempt to spell out the consequences by constructing a rough profile of approximately 700 blacks who entered selective schools in 1976 but would have been forced to go elsewhere if affirmative action had not been in place. More than 225 of those who would likely have been rejected went on to attain professional degrees or doctorates; about 70 became doctors and 60 became lawyers; nearly 125 became business executives; and well over 300 became civic leaders. Bok and Bowen acknowledge that some of those students would have been educated and done well even had they not gone to selective schools. (It is often forgotten in this debate that nonselective schools don't practice affirmative action.) But they maintain that the number succeeding surely would have been a lot lower.

The larger point, however, has less to do with statistics than with what Bowen and Bok see as the mission of great universities: to help develop a leadership class in society. By that measure, they count academic affirmative action a ringing success. Not only has it greatly enlarged the black middle class, but it also has created a cadre of minorities who have taken positions of civic and political leadership. Black graduates of selective schools were "much more likely than their white classmates to have taken on leadership positions in virtually every type of civic endeavor," the authors assert. They go on to plead for an expanded definition of merit, one that goes beyond assessing grades and test scores. The "civic spirit, revealed through actions taken rather than good intentions expressed, and demonstrated over time through volunteering in schools, neighborhoods, museums and civic associations of every kind, is surely one important indicator of 'merit,' " they argue.

It is unlikely that Bowen and Bok, despite their reasoned tone and meticulous attention to detail, will sway the most outspoken critics of affirmative action. But the book is not written for them. Nor is it really written for those partisans on the left who have already made up their minds that affirmative action is essential for the well-being of American society. It is, instead, aimed at those in the middle—those who remain undecided, who are open to the possibility that affirmative action does more good than harm. In an age when political dogma tends to masquerade as social science, Bok and Bowen have accomplished something truly impressive: they have given the issue its dispassionate due.

How It Works at Stanford

How It Works at Stanford

A Story of King's Life

For Four Days in Fall, the Farm Was Home Again

Men and Women Finish in the Running