Publisher Who Couldn't Get Enough Competition 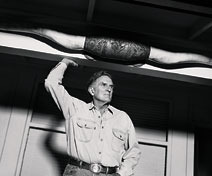 Otis Chandler, born into the biggest names in Southern California, made them bigger. His family’s authority—as owners of the Los Angeles Times and of swaths of the region’s land—was such that one author said “it would take in the East a combination of the Rockefellers and the Sulzbergers to match their power and influence.” In 1960, Chandler, then only 32, became publisher of his family’s newspaper and transformed it from a partisan rag into one of journalism’s brightest stars.

Chandler died at his home in Ojai, Calif., on February 27 of a degenerative illness called Lewy body disease. He was 78.

Born in Los Angeles, he was the only son of Norman Chandler, ’22, and Dorothy Buffum Chandler, ’22. His great-grandfather Gen. Harrison Otis had bought the Times in 1886, and he and his descendants had used it and their landholdings to influence politics and shape the burgeoning region. However, Norman Chandler didn’t believe in pampering his son, and Otis grew up doing his share of work on the family’s 10-acre ranch.

At Stanford, Chandler was a shot-putter and quickly became one of the world’s best (only a sprained wrist kept him out of the Olympics). He joined Delta Kappa Epsilon and met his wife, Marilyn “Missy” Brant, ’53. The couple divorced in 1981.

Before becoming publisher, he worked seven years to learn every facet of the newspaper business, from the mailroom to the newsroom. Competitive as ever, he sought to build a newspaper that would push the New York Times off its perch. He hired stars, encouraged strong reporting and diversified into related businesses before retiring as publisher in 1980.

“Otis Chandler will go down as one of the most important figures in newspaper history,” said Dean Baquet, editor of the Los Angeles Times, in its obituary of Chandler. “He built a newspaper that was as great as the city it covers. He set his sights on a goal—making the Times one of the two or three great American papers—and he pulled it off.”

A giant of a man (6-foot-3 and 220 pounds in his prime), Chandler sought out challenges. He loved to surf, lift weights, hunt, and ride motorcycles, and his hobbies are memorialized at a vintage transportation museum in Oxnard, Calif. In 1978, at age 50, he fulfilled a longtime dream of racing cars professionally by driving in an endurance race at Watkins Glen, N.Y. There he met an executive involved with the sponsorship of his race car, and Bettina Whitaker would become his second wife.

Chandler is survived by his wife; sons Harry, ’75, and Michael; daughters Cathleen Eckhardt and Carolyn Chandler; sister Camilla Chandler Frost; and 15 grandchildren. He was predeceased in 2002 by his son Norman, ’75.