On the edge of campus sits a historic cactus garden with a thicket of stories to tell.

Sooner or later, anyone who tests their green thumb by volunteering in the Stanford cactus garden—the Arizona Garden, if we’re being formal—is going to feel its bite. “You work in the Arizona Garden, trust me, you will shed blood,” says Stanford historic preservation planner Julie Cain, who has dug into the garden’s ornately laid out beds as well as its 140-year past. “It’s just a matter of time.”

It’s not the murderous-looking spikes of the golden barrels or the Ferocactus rectispinus that tend to get newcomers. Common sense screams caution there. It’s the silky-looking fuzz of the “Mickey Mouse cactus”–Opuntia microdasys. A brush with one can leave you hollering for the Scotch tape, about the only way to extract the microscopic spines too numerous to tweeze out. “All of us have gotten punctured, stabbed, hooked, you name it, and none of us dread anything more than the Mickey Mouse ears,” Cain says.

Not to be too glib, but their pain has been the campus’s gain. Once famous (or infamous) as the preferred make-out spot for generations of Stanford students, the Arizona Garden had virtually disappeared under weeds and the leaf litter of encroaching oak trees by the time the school decided to attempt a rescue in 1997 as part of a broader restoration of the area that includes the Mausoleum and the Angel of Grief statue. The effort, largely composed of volunteers, has returned the garden close to the stunning glory of its beginnings.

When Jane and Leland Stanford commissioned the garden in the early 1880s, they had no clue they were creating the canoodling capital of anything, let alone a future college campus. With their only child, Leland Jr., very much still alive, they had happier plans for their vast Palo Alto farm than building a university in his memory. They were planning a country estate befitting their status as giants of the Gilded Age. And like many a modern multimillionaire, they wanted to wow. Amid plans for about 400 acres of lush landscaping surrounding a planned mansion, the cactus garden was meant to be an unmistakable sign to visitors that they had arrived. “It’s supposed to be a crown jewel,” Cain says.

‘The Arizona Garden was a status garden. It really was to say, “This is the type of garden we can afford to have.”’

The restoration has brought back the magic; the cactus garden is like an enchanted otherworld on the southwestern edge of the Arboretum, the vast tree-filled area that flanks Palm Drive. And yet it can be hard for modern eyes to perceive the awe the garden would have evoked in 1882. Beautiful, yes, but why would it stand out amid all the other luxuries afforded by two of the richest Americans of their day?

To appreciate the full impact, you need historic glasses, Cain says. In the early 1880s, some people were growing desert plants in greenhouses and glass cases, but few were using them in landscaping—and none in formal Victorian parterre gardens, with their intricate patterns of beds and pathways. Rudolph Ulrich, the German landscape designer responsible for the garden, was eager to push the envelope with an attack of colors, textures and species. “He was looking to blow your socks off,” Cain says. “He wanted you to look at that garden and say, ‘Oh my God, I’ve never seen anything like this.’ ”

And you hadn’t. The rare and fierce-looking cacti may have drawn top billing, but Ulrich sampled widely, filling the garden with cypress and spruce trees, as well as succulents like the giant yuccas and towering century plants whose descendants survive to this day. The result was an exotic assemblage that nature would hardly have imagined. Botanical consistency was not a concern for a Victorian gardener like Ulrich. “Having an ecological theme, I think, wouldn’t even be on your radar because you’re not concerned about that; you’re concerned about, ‘Look at all these cool plants I can grow together,’ ” says Christy Smith, the garden’s coordinator since 1999 (a job she balances with her role as manuscripts accessioning manager for Stanford Libraries’ Special Collections). “It’s about textural contrast and appearance.”

But without a multimillionaire benefactor whose railroad stretched into the American Southwest, Ulrich’s vision might have died on the vine. It was Leland Stanford’s trains as much as his fortune that allowed the landscape architect to wander off into the Sonoran Desert with teams of workers to fill boxcar after boxcar with mature prickly pears and 50-year-old saguaros before bringing the bounty back on the Southern Pacific Railroad. A crown of thorns made from these cacti might just as well have been cast in gold, such was the cost. “The Arizona Garden was a status garden,” Cain says. “It really was to say, ‘This is the type of garden we can afford to have.’ ” 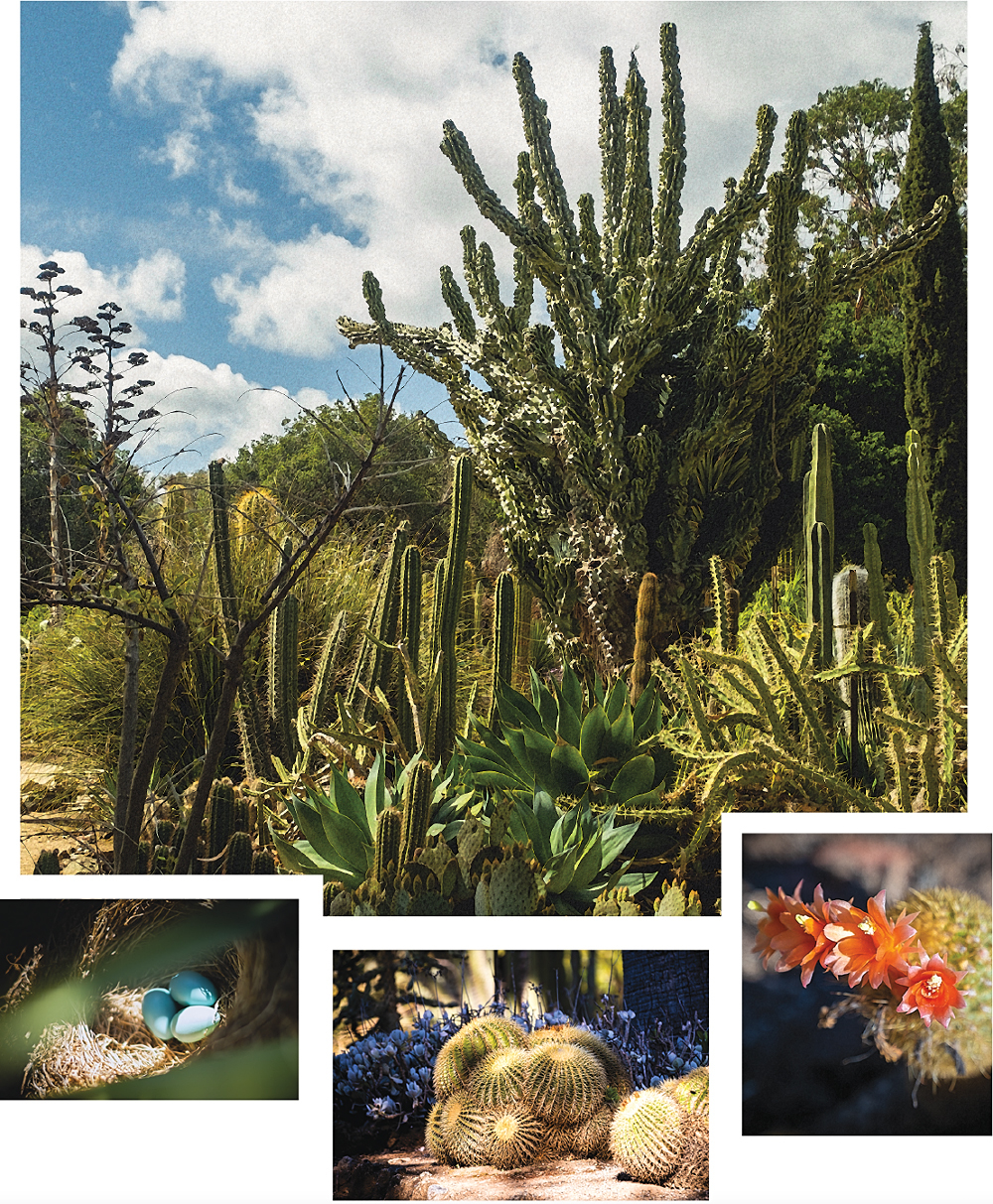 Ulrich appears to have first installed a cactus garden at the Hotel Del Monte in Monterey, Calif., which Stanford and his fellow surviving Big Four railroad tycoons had built as a destination resort. That garden was part of an effort to entice distant guests to make long journeys (by train, of course) and to keep them happy during extended stays. (If you were going to cross the country, you lingered awhile.) The fact that the garden needed little water and advertised the Golden State as a place where anything could grow was so much the better for a California booster like Leland Stanford. He apparently liked the Monterey creation so much, Cain says, that he wanted his own.

Leland Jr.’s death in 1884 changed everything. Instead of flourishing at the doorstep of Stanford family life, the garden found itself on the quiet cusp of a fledgling campus, adjacent to a memorial. It wasn’t immediately forgotten, however. Jane Stanford was a major figure for the first generation of students, faculty and staff, and while her memory remained strong, the region with the garden, the Mausoleum and the Angel of Grief remained hallowed ground, Cain says.

But reverence can fade with time. And in the mid-1920s, Chung Wah and Ah Wah, the pair of gardeners who lived in a nearby bunkhouse and tended the cacti, retired to China. In short order, the Depression plunged the university into a battle for survival. By the 1930s, nobody was putting in the work required to keep a cactus garden healthy in the clay soil and wet winters of its transplanted setting.

This decline in official attention corresponded with a rise in the area’s appeal to courting couples, which had been part of the garden’s lore since the university’s earliest days. “Down by the cactus so silent and still / The Junior has come to the question at last; / And love him? The maiden has promised she will / Until the long fever called living is past,” a member of the Class of 1901 wrote. A 1919 article in the Daily mentions a poem called “The Romance of a Bold Suitor in the Cactus Garden.”

The garden’s beauty made it a natural courting spot, though its chief attribute may have been distance, Smith says. It was a good 15-minute walk from the prying eyes of the Quad, the center of campus life. But it was the rising popularity of the car that turned the garden into a lover’s lane. In 1942, senior prom organizers, looking to raise excitement for the dance, put envelopes on every car parked around the garden with a pair of tickets in two of them.

Other gifts of the garden could be more permanent, as Smith and Cain have heard firsthand. “We had one woman tell us, ‘That’s where I conceived my first child,’ and I’m like, ‘Oh my God, this is way too much information,’ ” Cain says.

As sexual mores (and dorm rules) changed, the area lost its luster, and its lust. By the early 1960s, the cactus garden—once a regular source of innuendo—virtually drops out of mention in the Daily. (This spring, it made a reappearance as one of the “best places to cry at Stanford.” It’s No. 6, with points off for distance.) 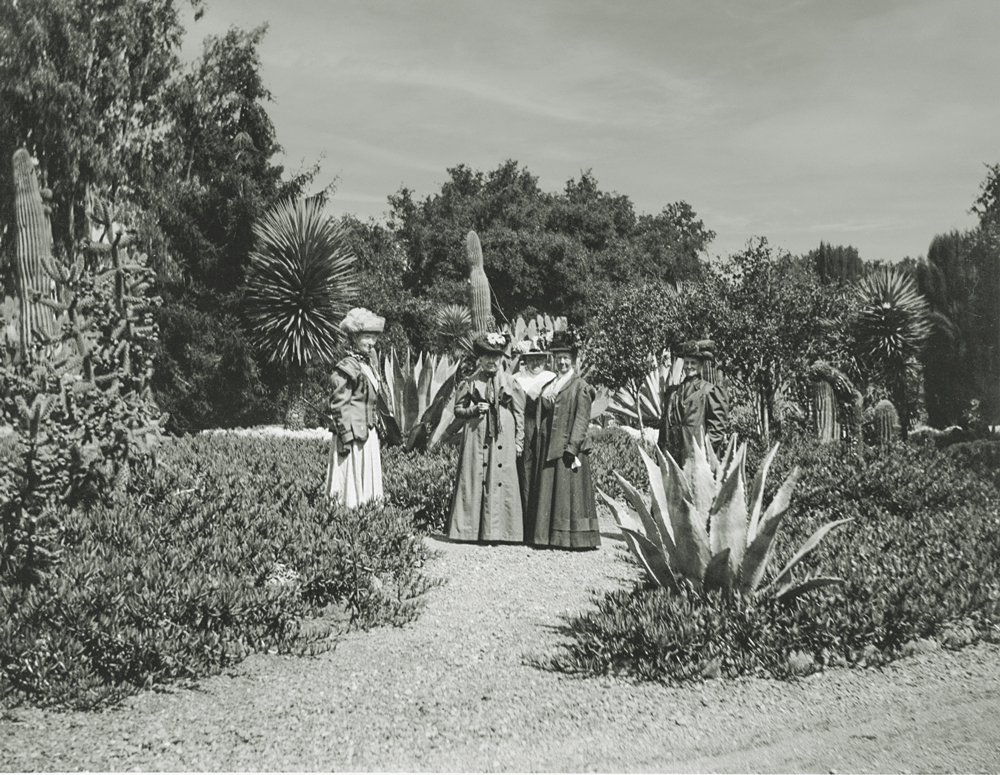 Thus began the garden’s most forgotten years. When the university began its reclamation in the late 1990s, its beds were six inches deep in leaves, oaks loomed over the succulents, and most students did not know the garden existed. And yet, a dozen or so species had survived from the original planting.

Revival has been a process of hard work, donated plants and occasional negotiations. Initially, some on campus opposed removing the oaks that had come to obscure the sun. A shade study made clear that trees and garden couldn’t both flourish. The desert plants were “100 percent in shade, 100 percent of the time,” Cain says. Thirteen mature oaks were soon removed.

Michael Behen, a former member of the San Francisco Succulent & Cactus Society, likens the early restoration process to an open dig. When he joined the effort in 2000, volunteers were searching for the original serpentinite stonework used to create the edges of the garden’s 58 beds, which extend from a central axis in a symmetrical quadrilateral pattern that from above looks like the patterns of a tortoise shell. Over the decades, the stones had been swallowed by Arboretum dirt. Old photos and maps narrowed the search, but in the end, success came down to lots of hopeful digging, sometimes on hands and knees. “It was like archaeology,” he says.

It remains a never-ending job. Any formal garden requires constant care, including deadheading flowers and paring back growth that would be tolerated in more naturalistic landscaping. But the fact that many denizens of the Arizona Garden could put your eye out necessitates extra vigilance while pruning. The ongoing run of warm, dry winters has been good to the succulents, if little else, but they still require special attention when the mercury drops. Plastic covers provide some protection, but standing water combined with cold temperatures can take a vicious toll. “Things have to be pretty vigorous to survive out here,” Smith says, who, conversely, has to hand-water the plants every four to six weeks during arid stretches. But with the labor comes love. “I’m blessed by the number of people who tell me they really love this garden,” she says. “It always makes me feel it is worthwhile. It’s a privilege to work in a garden of this significance.”

If you go, just mind the mouse ears.