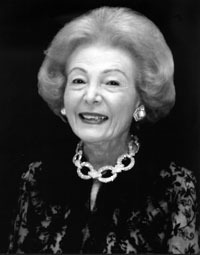 Annenberg, ’40—philanthropist, dignitary and expert hostess—died March 12 at 91. She had two short marriages before wedding ambassador and publisher Walter H. Annenberg. She led a life of philanthropy until 1981, when she got her first paying job as Reagan’s U.S. chief of protocol. She coordinated visits of foreign leaders, arranged White House ceremonies and performed other diplomatic tasks. She left the post after just 11 months after drawing criticism for several actions, including an occasion when Annenberg curtsied to Prince Charles on American soil. Commentators called the deference unseemly.

In 1989 she and her husband started the Annenberg Foundation, providing funds to schools, hospitals, theaters, libraries, museums and public television stations. The couple are the donors behind Stanford’s Annenberg Auditorium. Mrs. Annenberg succeeded her husband in 2002 as chair and president of the foundation, which is estimated to have given away $4.2 billion.

She received numerous awards, including in 2004 when Queen Elizabeth II named her an honorary Commander of the British Empire for contributions to British-American relations.

She loved to entertain, particularly at the 32,000-square-foot Sunnylands. Richard Nixon retreated there after Watergate, and Bob Hope was a regular visitor. Annenberg said, “The key ingredients are first of all to have interesting people. Then you try to put together an ambience of good food and attractive table settings. But all of that would be unimportant if you didn’t have interesting people.”

How Stanford experts put their studies to work in the corridors of power.

Nourishing the Arts in All Forms

From Wallace Stegner to cell phone a tradition of imagination.