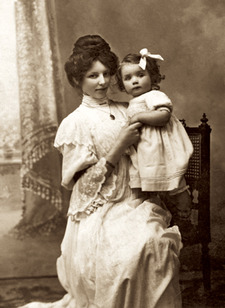 Just over a century ago, 16-year-old Eelkje Thummler left her family in the Netherlands and set out by ship for South America with her new husband. A Dutch widower, he was 20 years older and thought to be prospering. He had business in Comodoro Rivadavia, but it was Eelkje who would embrace the wild Argentinian port.

"She talked about Comodoro with such love," says Pam Lewis, Eelkje's granddaughter, from her home in Connecticut. "She'd describe how the gauchos would ride into town and race up and down the street, the pampas, how beautiful the horses were.

"I thought it must have been a wonderful place, but in my research I found photographs taken during those years. I was shocked. People lived in corrugated metal structures with dirt floors. There was virtually nothing there, and the wind howled nonstop. I think her great fondness for it was because she was so happy with her husband at the time."

Lewis, '65, has written a novel based on her grandmother's early life—and on how the young wife and mother was betrayed. A Young Wife (Simon and Schuster) follows its protagonist, Minke, as she accompanies her husband to Argentina, then to New York City in search of greener pastures. It's there that Minke meets a destiny that befell Eelkje. "My grandmother's husband must have been quite the charming rogue," Lewis says. "He abandoned her in New York with four little daughters. And then he started another family with her sister."

Lewis learned of these events only after her grandmother's death in the 1970s and her mother's in 1984. Lewis's mother, Elly, had refused to talk about her father. Eelkje, who learned to support her family as a seamstress, would speak only of her love for Comodoro. "I had no idea who my grandfather was," Lewis says. "I knew he was alive, but he was never in our lives. When I asked, I got only vague answers."

A Young Wife is Lewis's third novel, after two contemporary psychological thrillers. Her debut, Speak Softly, She Can Hear, was purchased by Simon and Schuster when she was 59. Fiction writing had always had a place in her life, but she'd had two sons to raise and had never banked on becoming a successful novelist. "It seemed like such a long shot," she says. "I decided early on not to pin my hopes on that, but to write because I enjoyed it and to make a living at other things. I was a disaster as a Welcome Wagon lady. I was a treasurer for a corporation. I wrote for a newspaper in Vermont. I tried to do things that fit around the family."

In a biographical note, she says that when "more serious money was required," she wrote "marketing copy for insurance companies in which the objective was to make the reader see his or her diminishing health and retirement benefits as a welcome change." There came a day in 1994 when she was on a business phone line with an insurance client who was telling her that her writing wasn't up to snuff and "at that very moment I could hear my home phone ringing," she recalls. It was an editor at The New Yorker who wanted to publish her story, "You Are Here."

That "incredibly wonderful moment" boosted her confidence. So did the example set by Harriet Doerr, '31, who dropped out of Stanford when she married but returned 45 years later to finish her degree and to publish, at age 73, her acclaimed novel, Stones for Ibarra. If Doerr could do it, Lewis asked herself, couldn't she?

Speak Softly, She Can Hear is the story of a prep-school scholarship girl ready to lose her virginity who gets tangled up in a killing that occurs during a tryst. Perfect Family, published in 2009, is about a mysterious drowning in a patrician New England clan. Both are suspense novels, but Lewis says she "never thought in terms of genre at all." Instead, each evolved from an experience that had affected her, something she wanted to explore and resolve. It was what she had learned to do as a child.

"My family obviously had lots of secrets," she says. "When something wasn't fully explained, which was often the case, I made up my own reality. Children do that. They need whole cloth. If no one gives them answers, they're likely to find their own."

Now 67, Lewis has imagined the inner lives of her mother and grandmother in a book dedicated to them both. It marks a sweet, new chapter in a career she was content to wait for. "I'm so happy that it has happened now," she says. "I don't feel the way I would have felt when I was in my 20s. The pressure. The competition. At this time in my life, it's just kind of wonderful. It's all gravy."

ANNE STEPHENSON is a writer and book reviewer in Phoenix.

ONLINE ONLY: All the Opposite Here

ONLINE ONLY: All the Opposite Here

What happened in the basement of the psych building 40 years ago shocked the world. How do the guards, prisoners and researchers in the Stanford Prison Experiment feel about it now?