Trevor Martin, PhD ’17, wants to bring diagnostic kits to a drugstore near you. 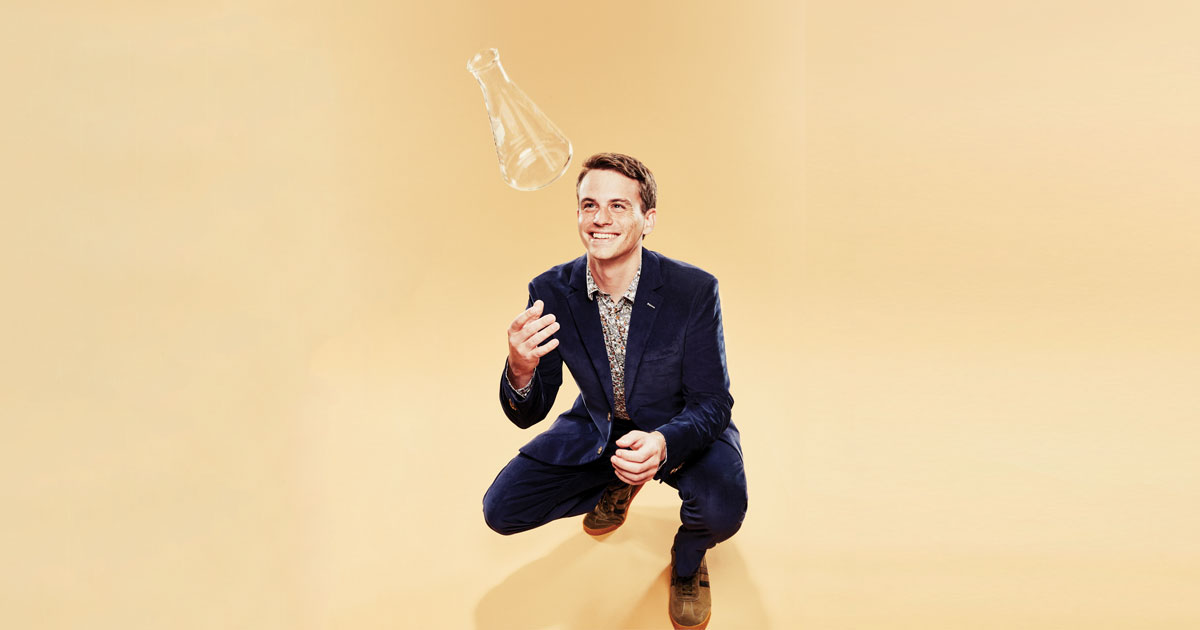 Trevor Martin, PhD ’17, hated biology in high school. He hated the emphasis on rote memorization—akin to stamp collecting, as far as he was concerned. Physics was his passion. “I liked the idea,” he says, “that we could under­stand the complexity of nature and things as large as stars or as small as chemical compounds by starting with fundamental principles.”

Now, little more than a decade later, biology is at the center of his work. He is CEO and co-founder of a San Francisco-based biotech start-up that, if it’s successful, could revolutionize medical diagnostics. Founded in 2017, Mammoth Biosciences has raised $24 million to bring to market a tech­nology that uses CRISPR—the bacterial immune system that has made headlines since 2013, when it was repurposed for genome editing—to detect genes of interest in an easily portable format. Martin’s goal is, in Silicon Valley parlance, to “democratize disease detection,” replacing costly lab tests with affordable over-the-counter kits that people can use at home to screen for infections and diseases.

Martin’s conversion to biology occurred when he was an undergraduate at Princeton, after he enrolled in the integrated sciences program. Created by David Botstein, the former chair of Stanford’s genetics department,  the program trains students in multiple fields to solve problems with an interdisciplinary approach. “I was very interested in the idea that you can take advances in one field,” Martin recalls, “and apply them to another to advance our understanding of the world.”

Seen through this lens, biology wasn’t boring at all. “Biology has all of these incredibly complex processes,” he says, “essentially like nanomachines that have to perform in certain ways to give rise to life as we know it.” By the time he finished his bachelor’s, he viewed biology “as the most complex system we can hope to understand.”

At Stanford, Martin earned his PhD in computational biology, an approach that creates algorithms from biological data sets to elucidate living systems and that was—when he learned it more than 12 years ago—“a novel concept,” he says. But while using this strategy to understand the evolution of gene expression, he was also looking for ways to take tools from one discipline and apply them to another. “I had just completely fallen in love with the concept of merging different fields.”

An area that struck Martin as ripe for innovation was diagnostics. By his estimation, advances in the field were incremental. As he looked for biological systems with diagnostic applications, he enrolled in Cardinal Ventures, a start-up accelerator for Stanford students. In 2016, he ran across the tool he’d been looking for while reading a paper in Nature from the UC Berkeley lab of chemistry and molecular biology professor Jennifer Doudna, who was famous for co-leading the teams that elaborated a concrete framework for how CRISPR could be programmed for gene editing. Her lab’s new paper described a version of the CRISPR-Cas system that had been engineered to report on the presence of targeted genes. The result was precisely the sort of innovation that Martin had been seeking.

Martin immediately saw the new CRISPR system’s utility for diagnostics. He calls it ‘a programmable search engine for life.’

The story of CRISPR, insofar as humans have known of it, began with the mystery behind its unwieldy name: clustered regularly interspaced short palindromic repeats. First noticed in 1993, the mystery was a strange DNA sequence made of small clusters of genetic information that ran along the genome as evenly as the stripes on a candy cane. Separated by spacers, each snippet of code was palindromic, meaning that it could be read forward or backward, like the word “deified” or the phrase “never odd or even.”

Scientists found similar repeats in many types of bacteria but couldn’t tie them to a function that would explain such a deliberately spaced sequence. Eventually, they matched the palindromic snippets with the DNA of bacteriophages: viruses that “eat” bacteria—or, more accurately, that inject their DNA into them and use the bacteria’s cellular machinery to replicate.

Scientists eventually realized that the viral DNA catalogued inside bacteria was part of their immune system. They confirmed this when they found Cas, which stands for CRISPR-associated protein—a submicroscopic bacterial protein that carries transcripts of the viral snippets to identify attacking viruses. Like a host of lawmen carrying “wanted” posters as they search the faces in a crowd, the Cas proteins compare the DNA snippet they hold with every piece of genetic material they encounter. When a match is made, the Cas protein cuts up the incoming viral DNA, preventing it from taking over the cell.

Once understood, the CRISPR system was applied to gene editing, since the Cas protein can be harnessed to target specific DNA sequences and remove them, allowing new sequences to be inserted in their place. But whereas CRISPR has spawned a new industry in gene editing, what caught Martin’s eye was the modification Doudna’s lab had made to Cas. Two doctoral students, Lucas Harrington and Janice Chen, had engineered the proteins to contain reporter molecules that fluoresce green under ultraviolet  light. Now, when Cas found its target, its molecular “scissors” cut not only the DNA but also the attached reporter molecules, which then fluoresced. The resulting CRISPR system could be used to rapidly determine whether certain DNA existed in a biological sample. Tests could target pathogens or genetic disorders. If the DNA in question was present, the sample glowed green under ultraviolet light. Martin immediately saw the new CRISPR system’s utility for diagnostics. He calls it “a programmable search engine for life.”

Martin contacted Doudna’s lab. “I think I was a little too persistent,” he recalls. “They told me, ‘Stop coming by our office.’ ” Eventually, he obtained an exclusive license for the new diagnostic technology, and Harrington and Chen, who were soon to graduate, reached out to him about working together.  Along with Doudna, they became co-founders of Mammoth Biosciences. In 2018, they set up a lab in San Francisco’s Dogpatch neighborhood with five employees but have since expanded to 20 and moved to the Verily Life Sciences Campus in South San Francisco. In mid-2019, Mammoth was granted a patent for its use of CRISPR  that, in Martin’s words, “validates the work we’re doing now as leaders of the CRISPR diagnostic space.”

Martin envisions a range of applications for Mammoth’s CRISPR system beyond the lab—particularly over-the-counter products, so that someone could drop by the pharmacy to buy a rapid and inexpensive test for strep, influenza or any number of other infections, such as malaria, tuberculosis, dengue, Zika, HPV or HIV. People could even screen themselves for certain cancers several times each year, buying the tests for less than the average copay to visit their primary care physician.

But democratizing disease detection goes beyond consumer products. “Similar to how Apple’s iOS created a democratized platform for developers,” Martin says, “Mammoth’s long-term vision is to provide a CRISPR-based platform on which Mammoth and partners can build a large variety of tests, both within health care and across industries such as agriculture, oil and gas, and forensics.” For instance, any individual or organization wanting to determine whether a sample contains specific genetic material could have a diagnostic kit made for the sequence in question. While the obvious application is testing for infections or the expression of harmful genes, the same system could be used to evaluate the health of crops and the bacterial content of soil, assess whether microbes are corroding the insides of oil pipelines, and determine how long a body found at a crime scene has been dead.

Since Mammoth launched, its technology has been written about in numerous publications, among them Wired, TechCrunch, the New York Times and the Wall Street Journal.  Joel Palefsky, a professor of medicine and laboratory medicine at UCSF and an infectious disease specialist who studies HPV infection, has taken a particular interest.  “HPV is extremely important on a global basis in terms of secondary prevention of cervical cancer,” he says. “Mammoth’s technology has the potential to provide diagnostics quite inexpensively and easily for locations where the cervical cancer burden is the highest and where they need that kind of technology the most. The spectrum of HPV types does vary from place to place, and one of the really nice things about the technique is its flexibility. You can design a test that will pick up something quite specific and different from some of the other versions of the same organisms.”

As for the company’s name, Martin says that “Mammoth” stood out for a couple of reasons. “There’s the idea of the elephant in the room, but it’s even bigger—CRISPR coming into the diagnostics field initially, but more generally CRISPR coming into every field. You can’t ignore it.” He hesitates a moment and then adds, “It’s also just a really cute logo.”