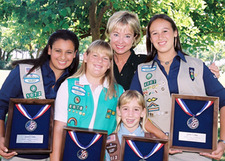 Jo Dee Catlin Jacob spent most of her career in the Navy as a woman alone in a sea of men. In nearly every station she went to, she was the first or only woman. But since retiring from her final post eight years ago as commanding officer of the U.S. Naval station in Guam, she has been surrounded by women and girls. As chief executive officer for the Girl Scouts San Diego-Imperial Council, one of the largest councils in the nation, Jacob has more than 30,000 girls and nearly 13,000 volunteers under her command.

Jacob's career path wasn't typical for a Stanford graduate during the tumultuous early 1970s. A Navy kid, she says she felt out of place as her classmates and professors broke windows and burned the ROTC building to protest the war in Vietnam. "I was more conservative than my classmates," Jacob remembers. "My voice was so small." Still, she didn't intend to make the military her career. She graduated in art history and headed into an economy that looked much like today's: "Even the best and brightest had trouble finding jobs," she recalls. While she pieced together a living working at a local department store, playing organ gigs at a church and teaching piano, she watched a friend earn enough from her Navy job to pay the rent. The woman also seemed to have a date every night. "She was having a blast," Jacob says. "I said, 'Nuts to this, I'm joining the Navy!'"

Jacob signed a two-year commitment with the Navy—then stayed 27 years. Parts of her path were hard. A number of friends reacted negatively to her career move and she had no female role models. Still, "for every dinosaur out there, there were five egalitarian men who helped me succeed." One of them, Navy aviator Glenn Jacob, became her husband in 1978.

Jacob relished the challenges the Navy brought. "It was like being back at Stanford again, where there was a buffet of opportunity." She worked in logistics and ordnance with a subspecialty in international security affairs.

Just before 9/11, she got the call that tore her away from military life. Would she, the caller wondered, be interested in heading a major nonprofit and overseeing a capital campaign? Jacob had no fund-raising experience ("In the Navy, that calls for court martial," Jacob says with a laugh), but she had been an award-winning recruiter and figured "it's easier to ask [people] for money than for their son or daughter." She joined the Girl Scouts and led a building campaign that raised almost $6 million—more than the organization had hoped for. "She captured the imagination of the giving community in this city," says Tyler Cramer, '73, who met Jacob when she moved to San Diego and has been active with her in the local Rotary Club. "Far more important, Girl Scouts reached out to parts of the community I never perceived of them serving before."

In 2002, Jacob conceived of a way to combine the ubiquitous Girl Scout cookie with her Navy logistics training: Her scouts wanted to send a treat to the troops, but in the midst of the anthrax scare, mailing them to individual military personnel simply wasn't possible. Jacob got the approval of the secretary of the Navy and now ships them in bulk via cargo container. To date, the council has sent 1.5 million boxes of cookies to troops stationed overseas through Operation Thin Mint.

CHRISTINE FOSTER, of Saratoga, Calif., is a Stanford contributing writer.

After 25 years and more than 3,100 murals, Jane Golden rejoices at how public art has transformed Philadelphia.

All it took to revive his school spirit was the next generation.