Research on the ear s stem cells could lead to a cure for deafness. 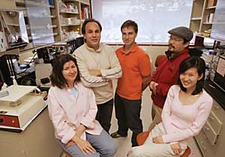 Physicians have been stopping Stefan Heller in the hallway to ask about his work on hearing loss. “They say, ‘My patients read about you and want to know when there will be a cure,’” Heller says. He tells them it will be a while. “If you have a child and the child is deaf, don’t wait—get treatment. That’s the message.”

Recently recruited to Stanford from Harvard, the pioneer in stem cell-based research on the inner ear is continuing work that may lead to both stem cell transplantation and drug therapies to treat deafness. Last fall, Heller moved his team of researchers west along with a 1,000-pound “monster” of a freezer filled with DNA samples and reagents that had to be kept at a constant minus-80 degrees Celsius. The appliance and the associate professor of otolaryngology and of molecular and cellular physiology are now happily ensconced in a new lab near Stanford Hospital.

As a young scientist in neural development, the German-born Heller was eager to find a research niche. “I thought, ‘This is an enormous field,’ so I was looking for a system that was unexplored.” As he was wrapping up his dissertation, he pulled down a copy of Principles of Neuroscience, read every chapter and wrote to 15 scientists who were leaders in their respective fields. When he got an enthusiastic response from neuroscientist Jim Hudspeth, who was moving to Rockefeller University, Heller signed on to do his postdoctoral research there. “I had no clue about this organ—it was so fascinating and so complex. And it turns out that not a lot is known about how the ear functions on a molecular level. I thought, ‘Well, that’s where I want to spend my career.’”

The 1990s were a period of excitement, and then disappointment, about research in hearing loss. But in 2002 Heller made a discovery—identifying stem cells in the inner ear—that revived scientists’ hopes. The inner ear is made up of two parts: the balance system (vestibular organ), and the hearing component (cochlea). Humans are born with some 15,000 microscopic hair cells in the cochlea that conduct sound—and that are continuously lost over a lifetime. But the vestibular organ is able to regenerate cells, and unlocking that process is the holy grail of researchers. “We thought the regeneration in the balance part of the ear is due to stem cells—that was our discovery,” Heller says. “We were able to isolate [the stem cells] and reintroduce them into an animal, and see that they were able to turn into hair cells.”

There is plenty more work to be done, he points out. “We are not at the point where we can heal a deaf mouse or a vestibularly impaired mouse, and we also don’t know whether vestibular stem cells can be used in the cochlea,” he says. “We have just looked at whether these cells are able to integrate into an ear.”

So far, Heller and his researchers have transplanted mouse cells into chickens’ ears because it is easy to damage the tiny mouse cochlea during surgery. “We want to move to the mouse, but that requires more skill,” he says. And while we’re on the topic of animal anatomy, the fact that birds are rarely deaf encourages Heller. “If we can find what wakes up a cell in the bird’s cochlea and then regenerates lost hair cells, we may be able to apply that mechanism to the mammalian ear.”

Heller’s lab also is working on drug therapies for hearing loss. He’s currently testing more than 100,000 drugs on inner-ear stem cells, looking for those that will “boost hair-cell development.” Drug treatment, in the form of inexpensive ear drops, could someday be used to treat some kinds of hearing loss, like those related to aging or exposure to loud noise.

The inner-ear researcher sounds a note of caution. Some hearing losses, he says, may never be curable with transplantation or drug therapies. “For those, there’s a wide spectrum of devices, like hearing aids and cochlear implants.” And no miracle cure is around the corner. “I think if you have hearing loss in 50 years, there [will be] a wide spectrum of things available. Maybe in my lifetime—but who knows?”

The welcome mat is always out: just don t send it flying.