A newspaper obituary writer uncovers the almost-forgotten life of a flamboyant lesbian heiress. 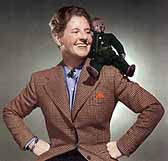 Kate Summerscale was working the obituaries desk at the Daily Telegraph in London when she stumbled upon the story of Marion Barbara Carstairs in late 1993. Carstairs’s recent death at the age of 93 had prompted a family friend to request a formal obituary and, after dipping into the newspaper’s archives, Summerscale, MA ’89, was astonished to discover a massive dossier on one of the most celebrated -- and possibly notorious -- women of her time.

Born in 1900 in London, Marion “Joe” Carstairs was a cigar-smoking, cross-dressing, motorboat-racing lesbian, who had tumultuous affairs with leading actresses, including Tallulah Bankhead, Mabel Mercer and Marlene Dietrich. With her close-cropped hair and exquisitely tailored Savile Row suits, Carstairs was delighted when anyone actually mistook her for a man. An heir to the Standard Oil fortune, she abandoned civilization at the age of 34 to become the self-appointed ruler of a 9-mile-by-4-mile island in the Bahamas. There she lived for more than 40 years, attended by a kaleidoscopic parade of beautiful women, avid sports and fishing enthusiasts, hearty partygoers -- and a small leather doll named Lord Tod Wadley, whom she treated as her best friend and lifelong companion.

After finishing the obituary, Summerscale found herself obsessed with her subject. She was especially intrigued by the fact that “Her internal life was almost invisible,” Summerscale writes in her introduction to the fascinating book that resulted: The Queen of Whale Cay: The Eccentric Story of “Joe” Carstairs, Fastest Woman on Water (Viking, 1998; $21.95). Although sketchy at times, this slim biography gives us a glimpse of a strange and enigmatic woman who ruthlessly set her own course through life.

In 1925, after inheriting the bulk of her fortune from the much-contested estates of her mother and maternal grandmother, Carstairs embarked on a short-lived competitive motorboat racing career. She won the Duke of York’s Trophy in 1926 -- Britain’s premier motorboat racing event -- and was determined to take the Harmsworth Trophy, then the most prestigious motorboat prize in the world. Carstairs spent an estimated half-million dollars building custom-designed boats and training for this event, but lost in three consecutive attempts: 1928, 1929 and 1930.

In 1933, facing tax problems in Britain and the United States, Carstairs bought the island of Whale Cay, in the West Indies, for $40,000. She built a Spanish villa, put up a power plant, radio station and schoolhouse, and even constructed a museum that was essentially a shrine to her own accomplishments and interests.

Carstairs never made any attempt to hide her sexual orientation. On her island she kept an ever-shifting succession of lovers well into her 70s. Her physical standards were as exacting as those of any aging male millionaire auditioning potential mistresses: partners needed to be young and were invariably drop-dead gorgeous. Carstairs took care to retain a photograph of each woman she bedded -- her own method of putting notches on the bedpost -- but none was allowed to spend the night with her.

It wasn’t uncommon for her to exclaim, “Oh God, I have to go to bed with her again,” when a lover hung around too long.

Despite her own promiscuity, Carstairs forbade sex outside of marriage on her island and punished adulterers by banishing them from the settlement. But she was generous in many ways to her employees, setting up a health-care fund and selling them, at cost, food and provisions imported from the mainland.

Summerscale draws on many literary analogies to explain Carstairs’s odd world view. One apt comparison is with J.M. Barrie’s Peter Pan, the boy who refused to grow up. Barrie characterized such individuals as simultaneously “gay and innocent and heartless.” Carstairs fit the definition. At 90, she proudly displayed scars from a contest with a former lover to see who could hold a burning cigarette against her own skin the longest. “I was young,” Carstairs explained loftily. “Fifty. Just a child, just a child.”

Most of Summerscale’s primary sources were tape recordings Carstairs made in her mid-70s, with a view to having her autobiography ghost-written by friends. (This never happened.) But there are years of Carstairs’s life about which little is known, and most readers will be hungry for additional material -- for dramatic color and vibrant, personal anecdotes to conjure up more vividly this eccentric and elusive subject.

Perhaps a character such as this will come to life only through a more creative re-imagining. Carstairs herself wanted Katharine Hepburn to play her if a screen biography were ever made.

It’s a little late for that to be appropriate casting. But not too late for someone else to attempt a fuller emotional portrait, and to complete what Summerscale has so superbly begun.

As student, professor and associate dean, Fran Conley has spent 35 years at the medical school. Her charges of rampant sexism raise troubling questions about academic medicine.