News from Another Side 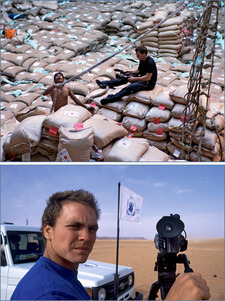 To get a story for the English-language service of the controversial Arabic network Al Jazeera, Casey Kauffman spent four days in the Congolese jungle, had to escape an enraged mob who believed he was trying to spirit a rebel leader he had come to interview out of the country in the trunk of his car, then was detained by Congolese military personnel. And that was just his first assignment.

In the end, Kauffman got his interview with alleged war criminal Laurent Nkunda and was escorted from the area by U.N. peacekeepers. The subsequent broadcast of the interview began to establish Kauffman's reputation for going where many would not to get a story.

A political science major at Stanford, Kauffman, '00, joined Al Jazeera English ahead of its launch in November 2006. He was attracted to the network by its willingness to be different, he says. "They wanted to bring the world's south to the north and report on areas not covered by Western media."

Kauffman has ventured into some of the world's hottest spots, often as both reporter and cameraman. He lived with a group of illegal immigrants at a camp in Mali, endured eight hours of questioning by Israeli officials at Tel Aviv airport while on assignment in the Gaza Strip, and lived on a boat in Bangladesh after a 2007 cyclone destroyed all the homes in the area.

"He's going to very difficult places," says Larry Diamond, '74, MA'78, PhD '80, a senior fellow at the Hoover Institution and at the Freeman Spogli Institute for International Studies, who was Kauffman's thesis adviser. "[His stories] are very powerful pieces and revealing dramas."

Largely funded by the Qatari government, Al Jazeera English was launched 10 years after the Arabic channel and has its own editorial team. It reaches about 180 million households in more than 100 countries and is one of the most watched news channels on YouTube, receiving 2.5 million views per month. The Arabic-language version is broadcast to around 50 million people, mostly in the Middle East.

Even before joining Al Jazeera, Kauffman was visiting troubled areas of the world, first while researching his Stanford thesis on resource control in the Niger delta and then covering the conflict in Darfur as a traveling video producer for the U.N.'s World Food Program.

Now based in Doha, Qatar, Kauffman spends 70 percent of his time traveling on assignments. He says he hasn't experienced much anti-Americanism, although a Palestinian colleague once described Kauffman as Italian while they were reporting in a refugee camp in Gaza.

Conversely, because he works for a network castigated by American politicians for its alleged anti-Western bias, Kauffman occasionally encounters resistance at home. His report on a small Ohio town's rally for vice presidential hopeful Sarah Palin during the 2008 presidential campaign stirred controversy when some people interviewed at the rally described then-candidate Barack Obama as a terrorist sympathizer whose views were "anti-white."

The story received more than 1.8 million hits on YouTube and ignited a debate about racial issues associated with Obama's candidacy. Former U.S. Secretary of State Colin Powell said during an interview shortly after Kauffman's piece aired that "those kinds of images going out on Al Jazeera are killing us around the world."

"It's very interesting to see people's reaction to him telling them he works for Al Jazeera," says Alessandro Cassigoli, a filmmaker who accompanied Kauffman on the Ohio assignment. "Some people didn't want to talk to him, but he told them he was born in the States and many slowly opened up to him. Casey can carry on a conversation with anyone—even without speaking the same language."

A story Kauffman produced last year revealed how the ongoing political conflict between Palestinians and Israelis endangers the lives of ordinary people. Feras Mazloum, the only child of a young couple in Gaza, was born with two holes in his heart, a condition easily repaired through surgery that was only available in better-equipped Israeli hospitals. But Feras had to wait while his parents tried to navigate a complicated and lengthy approval process. On the day he was finally to be transported across the border for the surgery, 19-month-old Feras died. Kauffman's report earned him a 2010 Concentra Award for Breaking News.

Feras's parents have since had another child, and Kauffman, who spent hours getting to know the family and gaining their trust, returned recently to Gaza to do a follow-up.

"Casey has a unique skill of opening doors into people's lives to show what's going on," says Ann Utterback, a voice specialist who has worked with broadcasters from CNN, MSNBC and Fox News. "He is more like a documentarian than a TV reporter, a quality not seen often on TV anymore."

DEVON MAYLIE, '05, is a writer based in London.

A Man of the West