New Quad on the Block

The goal: to make Stanford's science and engineering facilities second to none. Along the way, architects revived a century-old dream.

The scaffolding is down, the palm trees are lined up and almost all of the new occupants of the $120 million Science and Engineering Quad have moved in. With five structures torn down, four new ones put up and two others renovated, the SEQ is one of Stanford's biggest construction projects ever. Its buildings border a quadrangle of arcades and grassy terraces shaded by pine and locust and cedar trees. Like a town square, plaza space encourages interaction among people from departments once cut off from one another.

The new quad's architecture is striking and its labs and lecture halls are technologically dazzling. But this is not simply the latest campus jewel. The SEQ is part of a grander plan to reconnect the University to its roots while charting a course for future development -- a blueprint that carries on where the Stanfords left off.

About 20 years ago, University planners began to grapple with Stanford's version of suburban sprawl. Outside the historic campus core, structures with shapes and sizes and designs barely related to each other had cropped up every which way, especially during the postwar years of rapid growth. Any notion of the campus as an architectural entity seemed to be fading. The whole was somehow less than the sum of its parts.

There was another pressing concern, says Judy Chan, associate director of campus planning and design. Stanford's groundbreaking scientists worked in facilities that she charitably calls "less than state-of-the-art." To make matters worse, science and engineering labs were widely scattered across the western part of the campus -- a situation hardly conducive to collaboration.

By the mid-'80s, the University had formulated a response to these problems: a 41-acre, $250 million science and engineering complex west of the Main Quad. A $40 million donation from William Hewlett, '34, Engr. '39, launched the so-called Near West project in 1986. But the double blow of the 1989 Loma Prieta earthquake and federal research-funding troubles in the early '90s derailed it. (Some of the Near West buildings under construction before 1989 -- notably Green Earth Sciences, Gilbert Biological Sciences and Keck Science, home of chemistry and chemical engineering -- were eventually completed.)

What happened next sounds almost as apocryphal as Leland Junior's ghostly appearance before his father, the vision that gave birth to the University. And it proved almost as pivotal. At the dedication ceremony of the Green Building in 1993, David Packard, '34, Engr. '39, Hewlett's classmate and business partner, stepped into the back courtyard. From there, he could see a warren of aging engineering labs -- and was so shocked at the outdated facilities that he vowed to take action.

In October 1994, he and Hewlett gave Stanford $77.4 million, the biggest gift in its history, to build the Science and Engineering Quad.

The donation came shortly after the University had taken a new approach to physical planning. In 1989, Stanford hired its first resident architect, David Neuman. The challenges of campus design weren't new to him: Neuman had overseen projects at UC-Irvine, where he worked with topflight architects like Frank Gehry. By 1991, the year of the Centennial, Stanford's Board of Trustees had approved "Plan for the Second Century," a broad guideline for future campus alterations. Not long afterward, President Gerhard Casper -- who takes an avid interest in architecture -- instituted a policy of holding design competitions for most new projects. These developments converged to bring Stanford a reformed aesthetic sensibility.

In fact, principles set forth in "Second Century" derive from the original campus plan drawn up in 1888 by landscape architect Frederick Law Olmsted and architect Charles Coolidge -- with much input from Leland Stanford. That plan still made sense a hundred years later because it allowed for future expansion without spoiling the natural setting. The Main Quad defined the intersection of an east-west and a north-south axis (Palm Drive). There was to be a library quad on its east side and a science quad to the west. The Stanfords envisioned future quads, always interconnected, proceeding along this east-west axis.

It didn't take long for the 1888 plan to be corrupted. Jane Stanford became the first offender when she commissioned four stand-alone buildings -- in neo-classical, not romanesque style -- along Palm Drive at some distance from the Main Quad. (Of those, only the old chemistry building and the museum remain.) More sins were committed whenever new structures impeded the natural north-south or east-west flow of the campus. The main library, built in 1919, truncated the east-west axis on the east side of the Main Quad, while the old Physics Tank cut off passage from the other side. The Tank was razed in 1996 to make way for the SEQ.

Once construction debris started to clear last summer, it was evident that SEQ project architect James Ingo Freed and landscape architect Laurie Olin had righted some old wrongs. Today, if you stand in the middle of the new quad and look east, an unbroken avenue stretches away -- out through Lomita Mall and across the Main Quad to the renovated Bing Wing of Green Library. From this vantage point, says Neuman, "the power of the original campus plan is truly magical."

Another line of vision extends south to north almost half a mile, from Green Earth Sciences through the SEQ all the way to the Cantor Center. Physics, biological sciences and chemistry buildings roughly follow this route. The completion of Serra Mall -- the western extension of Serra Street -- creates a pedestrian passage as unimpeded as the view.

As new thoroughfares open up, the campus seems at once grander and more accessible. And easy access helps bring bright minds together -- formally and informally. Physics professor Blas Cabrera, PhD '75, says he and his colleagues in the Varian Lab are excited by the proximity of applied physicists in the renovated McCullough Building and the new advanced materials annex. The High Energy Physics Labs are now a two-minute walk away. "Stanford will be well served to produce the next generation of research breakthroughs," Cabrera says.

The SEQ promises to bring similar cohesion to electrical engineering. Before the Packard Building opened, EE sprawled across eight or nine different locations, some off campus. The department now occupies four adjacent buildings. The move also brings together all the computer-related disciplines, since the Gates Information Sciences Building and the Allen Integrated Systems Building are just across the street from Packard.

Of course, the project was intended to create architectural as well as interdisciplinary harmony. The McCullough Annex and Sequoia Hall echo the Main Quad with their attached arcades, roofing of clay tile and copper, recessed windows and stucco walls on granite bases. The Packard Building, on the other hand, has an eye-popping glass prow at its entryway, and the Teaching Center features a startling concave wall of silver-painted aluminum. Yet these two also serve a linking function, as the symbolic piers of an imaginary archway leading to the new quad.

In 1996, at the start of the project, architect Freed -- who designed the new San Francisco Public Library and the Holocaust Museum in Washington, D.C. -- told Stanford Report: "The buildings don't have to stand up and scream. All they have to do is tie things together."

Maybe so. But they do make a statement loud enough to be heard for a long time to come.

The Science and Engineering Quad is all about connections. The complex pulls departments together and puts people in related fields of study closer to each other. Its architecture and placement tie it to the Main Quad (inset), bridging Stanford's past and its future and linking humanities and sciences. Perhaps the most crucial connection: David Packard and William Hewlett, whose $77.4 million gift launched the new quad. 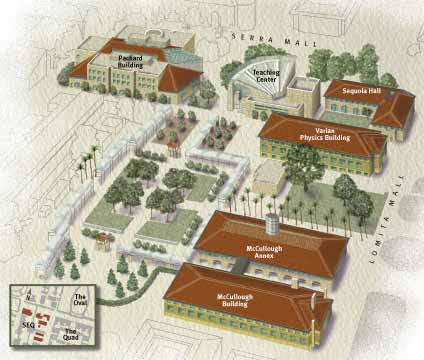 Goodbye Mr. Chips, hello Mr. Wizard. Professors need an online tutorial to master push-button audiovisuals for laptop-generated lectures, "smart" media controls, Internet and Ethernet hookups. The pièces de résistance: two auditoriums whose 360-degree revolving stages allow lab technicians to work backstage while one class is in progress, then flip a switch to rotate lab demonstrations, all set up, into the next class

The new home of statistics and undergrad math keeps the legendary moniker but sits a notch further east. Sequoia's main entry faces the mathematics center in the Sloan Building, across Lomita Mall on the Outer Quad.

The renovated departmental headquarters is just steps away from the new Teaching Center and from applied physics colleagues in McCullough. The new quad also opens up access on its west side to the High Energy Physics Lab, where many faculty do research.

The renovated McCullough Building houses applied physics faculty and the multidisciplinary Center for Materials Research. The Annex is home to the Laboratory for Advanced Materials (optical, magnetic and superconducting, for example). Its 33 modular labs share a central utilities corridor. 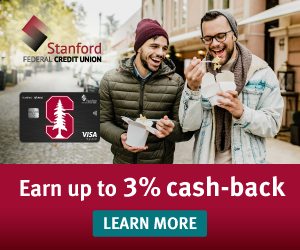 Freshman angst wears off. But the friends you make stay with you for life.

For bridge professional Grant Baze, success is in the cards.