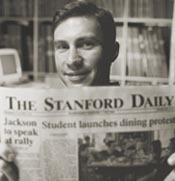 Ken Fenyo figures he spent way too much time in the Stanford Daily office as a student, poring over the old volumes housed there. He even thought about compiling some of the best front pages into a book. “My parents thought it might be a good idea to graduate first,” he says.

So he did, but he didn’t forget about the book. The Stanford Daily: 100 Years of Headlines, edited by Fenyo, ’88, was published this fall by Ladera Publishing Corporation.

Organized by decade, the book reproduces more than 200 Daily front pages, beginning with the first issue in September 1892 (when the newspaper was called the Daily Palo Alto), and ending in June 2003. In between is a compelling collection of administrative actions, natural disasters, faculty achievement and student mischief. On one end of the spectrum, a gruesome account of the shooting death of a student in 1909; on the other, a story about 45 Branner freshmen running naked across the Golden Gate Bridge in 1974. Between 1968 and 1972, when opposition to the Vietnam War and military recruitment on campus peaked, “there were stories about violence and protests just about every day,” says Fenyo, so it’s no coincidence that those two decades comprise more than one-quarter of the book.

Philip Taubman, ’70, Daily editor in 1969 and now Washington bureau chief of the New York Times, wrote the introduction. “The front pages are like a family album, filled with images that are likely to transport readers back to the day, even the hour, to memorable campus moments,” he writes.

Fenyo, a business consultant, hopes proceeds from the sale of the book will help offset a downturn in Daily revenue caused by the weak economy.

This article misspelled the name of the book’s editor, Ken Fenyo.

New Ways of Looking at the Past