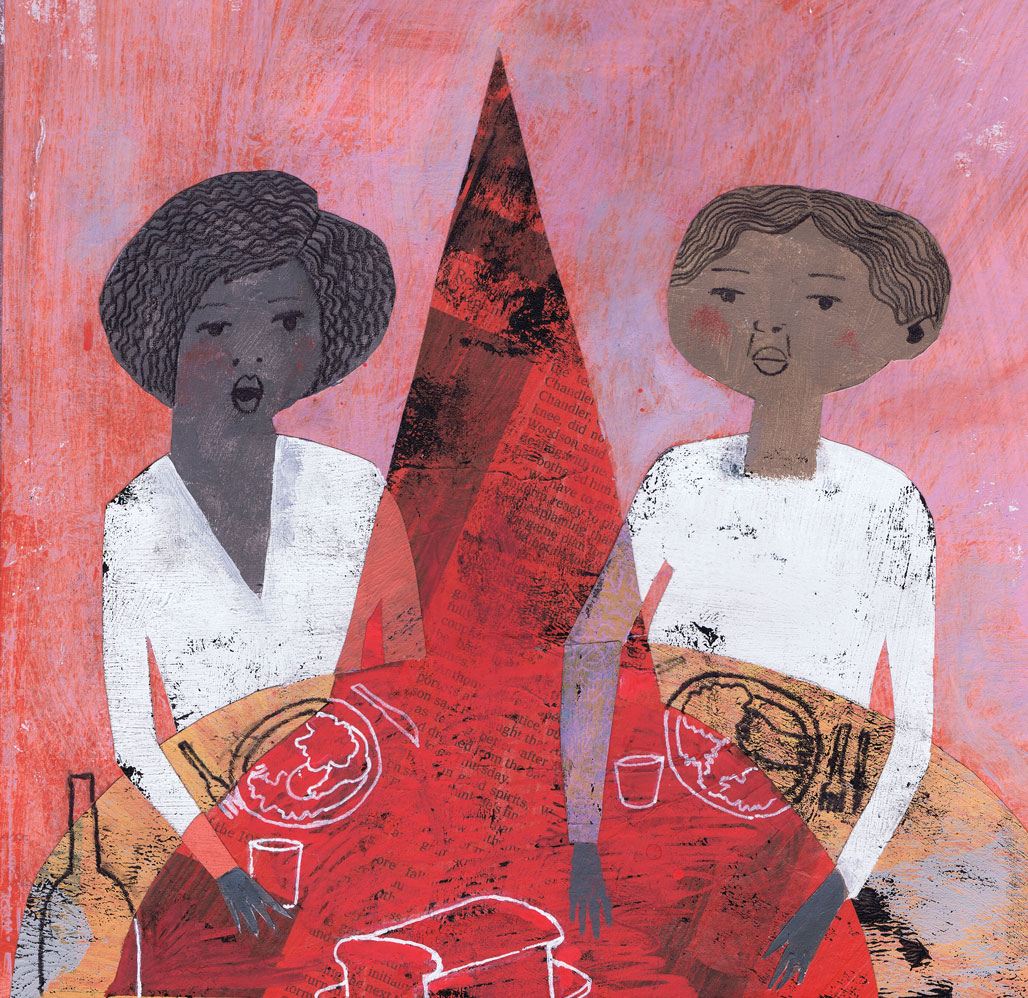 For Cassandra Knight, ’91, JD ’94, the terrorist campaigns of the Ku Klux Klan were part of family lore. Growing up in rural Jim Crow Mississippi, her parents witnessed the brutality of white supremacy. When her mother, Mary, was 8, she saw a man who had been lynched. Later, while Mary and Knight’s father, James, were enrolled at Alcorn A&M, the college’s president expelled a group of their fellow students for protesting on campus for voting rights. For Black people, traveling outside one’s community was particularly dangerous, and as they walked the long distances to their hometowns, several of them were murdered.

After graduation, Mary and James moved to New York and then to the Bay Area. He found work as an engineer, and she earned a graduate degree before becoming an anger management counselor. Their daughter, Cassandra, grew up in California, earned a bachelor’s in international relations and a law degree at Stanford, and worked her way to the position of vice president and chief litigation counsel at PayPal, a job she accepted in 2017. The following year, as a member of the Stanford National Black Alumni Association board of directors, Knight was invited to join the Stanford Alumni Association’s weeklong Travel/Study civil rights tour. Little did she expect that on that trip she would have dinner with Scott Shepherd, a former grand dragon of the KKK. Here, in her words, is the story of that evening.

“My family, as far back as we know, can be traced nine generations in Mississippi on both sides. My parents grew up in rural Mississippi and I have a huge extended family, most of whom are still there. I was lucky to spend summers growing up there. Though I am a Californian through and through, I have strong ties to our roots.

“Since the trip started with the new Civil Rights Museum in Jackson, Mississippi, my mom and I went early to visit family and then joined the tour. One of its stops was the home of Medgar Evers, who was gunned down in his driveway as he returned home. Any civil rights figure being struck down was horrible, but he was a Mississippian and an Alcorn alum and held an important place in my family. What was particularly poignant was that you could still see his bloodstains in the driveway after all of these years. My mom once said, ‘Imagine what we went through. Half of our heroes were getting killed. Imagine if Obama had been assassinated.’

‘We pressed him on whether he was involved directly with physical violence. He would own up to a little bit but not completely.’

“The tour had several stops. In Little Rock [Ark.], one of the Little Rock Nine was our speaker. At the 16th Street Baptist Church, we heard from a woman who survived the bombing and became a minister—Rev. Dr. Carolyn McKinstry. But it was in Memphis that Scott Shepherd addressed us at our hotel. One moment that was difficult for my mom was when he told us that Byron De La Beckwith, Medgar Evers’s assassin, had been like a grandfather to him. My mother bent over and let out a groan, as if she’d been punched in the gut.

“From his description, he seemed to have stumbled into being part of the KKK. He described a horrible childhood—not too different from any other story of someone who falls into a gang because of abuse and neglect. After joining, he finally felt that he belonged somewhere and that he was important. When he talked about what he did in the KKK, he said he tried to make a Black family move out of the neighborhood by vandalizing their house and intimidating them. But he minimized his involvement. For example, we pressed him on whether he was involved directly with physical violence. He would own up to a little bit but not completely. From my family, I know what someone would have to do to reach that level in the KKK. His story just wasn’t holding water.

“His change came about because of a DUI. The attorney assigned to defend him was a Black man, so he thought he was sunk—that that person would just throw him under the bus—but instead that person vigorously defended him even though he knew that Shepherd was a member of the Klan. They went on to be lifelong friends. And that attorney helped get him into rehab. Shepherd became friends with other Black people there. Now he works with young people to prevent hate speech. He says you have to worry more about the guys like him, the ones they’re recruiting. I think he’s genuine in his work. He tries to convince people that racism is a bad road to go down.

“One thing I found very interesting was that there was an old Black woman. He called her Becky. She had helped raise him as a child. So even though she took care of him and raised him, he went and became a member of the KKK. And then when he finally got out, he went back to the small town in Mississippi where he grew up. Becky said she’d always known he would return. She welcomed him back.

“My mom and I—particularly my mom—were the two people who engaged with him the most during his prepared remarks. Most of the group was silent. I think they were disturbed and didn’t quite know what to make of a lot of it. For example, one person threw him the softball question, ‘Why do you think you survived?’ He said something like, ‘By the grace of God.’ My mom, who is a very religious Christian and a Sunday school teacher, just couldn’t let that slide and asked, ‘What are your real beliefs in terms of Christianity and differentiating between people on the basis of race?’ The exchange was respectful but fairly contentious.

‘I doubt he’s a completely transformed human being. We’re all works in progress.’

“Afterward, when we went to the restaurant across from the hotel, one of the organizers invited Shepherd to join us. We picked our places at the tables where we were going to sit and eat. My mom and I took seats next to each other and then I headed to the restroom, but when I came back, I saw the back of a head I didn’t recognize right across from my empty seat. It wasn’t someone from the rest of the group. My initial reaction was like, aw, hell no. He was sitting across from me at the table. I was like, why did he choose this seat? I could just be projecting, but I think he was actually more comfortable with us because we were more similar to him, but he might also have wanted forgiveness. It’s interesting—the notion of Black people being more forgiving, more aware of how things actually work and what racism looks like and how it twists people.

“We actually got a lot more out of chatting with him at dinner than we did from his formal presentation. He talked about his current struggles in life—about his family and health problems. I think he lived alone. He’d already had a couple of surgeries and wasn’t doing too well. He looked as if he’d had a pretty hard life. I’ve never seen anyone’s hands shake like that before. Sitting there with him, we gained a bit more empathy. He talked about having lost time with his children during the years when he was a member of the KKK. He seemed like he really wanted connection, like he’d come full circle in terms of what he was describing about why he ended up in the organization. There was still some of that boy and the vulnerability as to why he was susceptible to it. He still seemed a little lost.

“I tend to be hopeful and that’s how my mom is as well. My last great-grandparent died when I was in my 30s. He lived from 1899 to 2001. He actually knew family members who had been slaves and who had to pay a poll tax to vote. You can imagine the span of history that he saw growing up as a Black man in Mississippi. Even my parents grew up under Jim Crow laws, with segregated schools and segregated drinking fountains. Both of my parents were the first in their families to attend college, whereas my grandfather had a third-grade education and could barely read or write. He promised his six kids that if they could get into college, he would find a way to pay. He cut down trees for pulp wood, raised and sold hunting dogs, and was a sharecropper. My mom picked cotton until she was 20 years old, just like everybody in our family for eight generations before that. But as difficult as my family’s struggles have been, there’s also been incredible progress. The life I am privileged enough to live, my great-grandfather could have never dreamed. It brought tears to his eyes at his 100th birthday party that one of his babies was a lawyer.

“But I still experience racism. In San Francisco, I get followed in department stores. When I worked as a public defender, I saw firsthand how badly the criminal justice system is skewed for race and income. And at a firm where I was hired in 1998, I was the first black woman lawyer they'd ever had. It was a very isolating experience. But I don’t forget my family’s incredible legacy of hope and achievement through education. I still hold on to that.

“As for Shepherd, I doubt he’s a completely transformed human being. We’re all works in progress, but maybe we all learned a little bit more that evening. I don’t think he’s anyone we would stay in touch with. It was just one of those life experiences that we will certainly never forget.

“After the dinner, we ended up giving him our leftover ribs. My mom and I gave him hugs and said we would pray for him because he needed to go into another surgery. Later, when we left the restaurant and went back to the hotel, he was sitting in the bar area by himself. He was a sad, lonely figure.”

The Power of Place

Inside the museum that shimmers with light on the National Mall—“a rich picture of African American life.”