Before he joined the Class of 2007, Blake Ross revolutionized the way people surf the web. 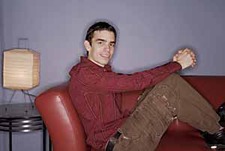 Practically since he could hold a mouse, Blake Ross has been the go-to guy for computer questions. Recently the Stanford sophomore got a call from a friend, begging him to come fix her computer. When she powered up, no fewer than 10 pop-ups appeared on the screen. Ross watched as she nonchalantly clicked them closed, one after another—as if it took everyone more than a dozen steps just to start a computer.

Then she launched Internet Explorer. For almost a decade, the Microsoft browser has been the web gateway for most Internet users. But its popularity makes the browser a target for malicious programs that can steal personal information from a computer, or even hijack the system to send spam. An estimated one out of six computers is infected with spyware.

Ross had to reformat his friend’s entire hard drive because spyware had colonized it so thoroughly. He then suggested she use a new browser called Firefox. It’s safer than Internet Explorer, thanks to built-in pop-up blocking, spyware protection and simple-to-use security tools that help users cover their tracks online. It’s faster than the competition and smaller—less than 5 MB compared to 250 MB for just the latest security patch for Internet Explorer. Firefox also can be customized for each user. As one fan wrote at the SpreadFirefox.com website, “The Fox is nimble, the Fox is quick. This Internet browser does the trick.”

Blake Ross would know: the teenager from Key Biscayne, Fla., was one of Firefox’s creators. Since its launch November 9, Firefox has been downloaded more than 27 million times and its success has taken the first bite in years out of Internet Explorer’s share of the browser market. Whether the upstart browser can unseat Microsoft remains to be seen, but the Redmond, Wash., giant recently announced plans, after a four-year hiatus, to upgrade Internet Explorer and incorporate new security features. Before reaching the age when he can rent a car, Ross has changed the way millions of people get around on the web.

Ross, who turns 20 on June 12, credits his parents for fostering his interest in computers. He recalls nights spent playing adventure games with his dad, David. At age 10, he created his first website, eschewing the tools available to make the task easier. “I was more interested in how I could get to the raw code and just do it by hand.” Then he went on to create simple, text-based games to play in America Online chat rooms. “I was never really content to just use the computer,” Ross says, “I was always tinkering with it in some way.”

In 1998 Netscape released the source code for its Navigator browser and invited developers to pick through it, find bugs and suggest remedies. Ross dove in and started submitting fixes. His ideas earned him a summer internship at Netscape’s Mountain View headquarters in 2001. Mom, Abby, traveled across the country, rented an apartment and drove him to work every day. Ross was attending Gulliver Preparatory School in Coral Gables. He continued work on the browser, with Netscape paying him on contract—possibly the coolest after-school job ever.

Still, the work was serious business. Netscape, once the only game in town, was engaged in a “browser war” with Microsoft, which had gained market dominance by bundling Internet Explorer with the Windows operating system. In an effort to regain ground, new parent company AOL split the Netscape browser division into a number of groups to attack different aspects of the problem. This resulted in a “too many cooks” situation, Ross says. The interface became far too complicated for the average user. Features that were good ideas in theory, like the automatic form filler, turned out to be horrible distractions in practice. “Just getting started using the web in Netscape was an exercise in frustration,” Ross says.

He remembers staying up until 3 or 4 in the morning poring over Netscape’s customer feedback. “People were saying that Internet Explorer was so bad and Netscape was so bad,” Ross says. “I knew that there was something out there that people wanted and nobody was giving it to them.”

Ross and David Hyatt, a senior engineer at Netscape who now works for Apple developing its Safari browser, started working nights on a back-to-basics browser. They began by “forking” the code, separating the meat—the engine that loads websites—from the fat—the icons, advertising and extraneous features. Then they built a new user interface from the ground up. Ross drew some of his inspiration to simplify from Google’s founders, Sergey Brin, MS ’95, PhD ’98, and Larry Page, MS ’98. “They practically invented the ‘Oh, duh’ school of usability,” he says.

Ross and Hyatt tried to sell Netscape on the new browser, but the higher-ups just didn’t grok it. “They said, ‘This is just the browser we have, but with fewer features,’ ” Ross says. Which was exactly the point. A browser, he reasoned, should have no other purpose but to allow people to surf the web. Netscape eventually spun off the project to the Mozilla Foundation, a not-for-profit, open-source software project.

The goal was to create the best browser for the most people—simple enough for inexperienced web users, yet flexible enough to please advanced users. Firefox has a search box built into the toolbar, and tabbed browsing that lets a user toggle between multiple web pages in the same browser window. For net-savvy users who subscribe to RSS (Really Simple Syndication) feeds or read blogs daily, a feature constantly updates headlines in the bookmarks menu.

Because the Firefox source code is available for anyone to download, people all over the world have created extensions that work with the browser. The extensions range from useful (Forecast Fox gives the current weather for any city in the toolbar), to entertaining (Foxy Tunes lets you control any MP3 jukebox from your browser window), to absurd (Abe Vigoda Status tells you whether actor Vigoda is still alive).

When Ross started at Stanford in the fall of 2003, he turned over the reins on the Firefox project to lead engineer Ben Goodger, a New Zealand native who shepherded the browser to its release. (Goodger since has left Firefox to work at Google.) When Ross is not helping run the SpreadFirefox.com website or posting to his blog at BlakeRoss.com, he does his best to lead a normal college life. He says he’s given up the usual coders’ fare of Cheez-Its and popcorn in favor of carrots and tofu—chalk it up to living in carb-conscious California. “I’m a disappointment to programmers everywhere,” he jokes.

A computer science major, he is a TA for CS 107: Programming Paradigms. Professor Jerry Cain calls him a “natural programmer” and a “miraculous student.” Cain says he wasn’t surprised to learn that Ross was one of the lead architects on Firefox. “What’s remarkable is that Blake has been able to balance working on Firefox and still do so well in school.”

Firefox has been written about in major newspapers, and Ross recently was featured on the cover of Wired magazine. (“It was a surreal experience handing it to the cashier,” he says.) But not many fellow students know about his role in the project. “The first e-mail I got when I moved into my dorm was from our RCC urging all residents to download Firefox,” he says. Senior Graham Anderson-Dana, the resident computer consultant who sent the e-mail, says he had no idea when he met Ross that the skinny kid with the spiky black hair was one of the main people responsible for the browser. “When I found out, I just shrugged and thought it was kind of cool.”

On campus, Ross says, he has to fight the temptation to peek over people’s shoulders to see which browser they’re using on their laptops. “It’s a great way to do market research,” he says, “but people tend to think I’m trying to see which website they’re looking at and get annoyed.” He’s been impressed by the groundswell of support for Firefox. “It’s incredibly gratifying to see firsthand how Firefox has made its way into people’s lives. You read so often about excellent ideas and products that failed that it almost seems impossible to align the planets in your favor.”

What’s next? Ross is working on a software venture with a fellow Firefox team member. He’s circumspect with the details, saying only that, “Firefox made it easy to view the web; now we need to make it easy to create it”—and that a beta version may be out this summer.

GRETA LORGE, '97, is an assistant editor at Wired magazine.

A Comedy of Errors

The initiative in international affairs capitalizes on our strengths.