As I strolled around campus, Stanford gave me one gift I hadn't expected.

One Saturday last summer, I came upon a few free hours, and I felt the pull of the Farm. Once there, I began to walk, and walk some more, and as I did, I just naturally started to think about my dad. Imaginings of his time there, and memories of mine, with and without him, began to unweave themselves.

He had pushed off from this world the previous January. I wasn’t with him when he died, and I’d been struggling with that, though I really don’t think he cared. In fact, I believe he preferred to be alone. But could I at least have been in the next room? The same city?

I felt a new ease as I meandered around campus, so I went on a walk to remember my dad, John D. Carpenter, Class of 1944. Herewith, a memory walk.

First stop, Encina Hall, repository for 600 or so freshman boys (can you imagine?) in the fall of 1940, including my dad, up from Los Angeles on the Coast Daylight. He always said one of his brothers got into Stanford on smarts and another on suave, but he got in on sheer luck. I never believed him.

At Encina, the sameness of it comforts me: The same Encina Hall inscribed on the front. The same steps, more or less, that my dad likely sprinted up for the first time on a hot move-in afternoon—just another kid with his duffel, on the brink of a future. True, there was no wheelchair ramp or FedEx box back then, and it hasn’t been a residence hall since the ’50s, but it still remains—and imposes. Despite all the infamous high jinks within its frame, you don’t mess with Encina.

Next stop, Avery Aquatic Center. It’s not the same pool where my dad practiced and played water polo for Stanford, but between its name (Burt Avery, ’45, MBA ’48, was a friend), the smell and splash of chlorinated water, and the sound of coaches still blowing whistles on a late Stanford afternoon, I always think of him here. As an alum, he attended the Big Splash whenever he could, and I often went with him.

Up, way up, to San Juan Hill and near the site of the old Delt House. In this place, inside a house that is no more, my dad made some of his life’s best friends—they went off to war together, stood at each other’s weddings and godfathered each other’s children, met for lunch the Friday before Big Game for more than 60 years. Several attended my dad’s memorial service; one spoke. Fraternity boys who would grow into men, first young, then not so, strung together always. The years went way beyond the building.

Back down to Storey House, perhaps taking the route my dad once did to court the woman who would become his wife. Now standing in front of Storey, I picture him approaching the front door, hair slicked, perhaps with a bouquet in hand. In one well-known scene from family lore, my mom sits on a couch, darning a pair of socks for another suitor, a look of horror crossing her face when she sees my dad enter the lounge. She quickly stuffs the socks under a pillow and grabs a pair of my dad’s to start on. They would marry the following year.

Once I’m in White Plaza, I think about my own Stanford past, which, for an instant, feels present. Fellow Soton Tom Bedecarré, ’78, posts signs advertising “Sherry Hour with Jack Carpenter, 6 p.m.”; my dad shows up in the dorm lounge. I’m biking around the old Engineering Corner after my 11:00 lets out, and I practically flatten my parents, not realizing they’re in town. I’m peering through the glass of P.O. Box 5951 for an envelope addressed in a familiar scrawl.

My dad paid his final visit to the Farm in October 2013, for my mom’s 65th reunion. After straining through the weekend, he attended one last event, lovingly orchestrated by several engineering department staff members (thank you, Stacy Fredericksen and Kristina Herbert), a lunch at the Faculty Club for my parents to meet a few of their partial-scholarship recipients. Much to our surprise, four of the students showed up. Admittedly stilted at times, the lunch still mattered. 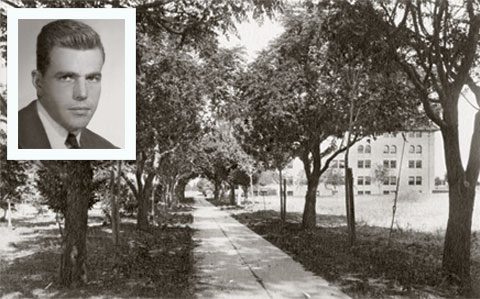 There were two things we didn’t know that day. First, that cancer already had begun to rage inside my dad. Second, that after the lunch that still mattered ended, photos were taken, and goodbyes were said—and while a van carrying two weary Stanford alums dropped south on Highway 101 and the four John D. & Mary L. Carpenter fellows pressed forward to their labs and lives—a baton was passed quietly.

Stanford gave me a broader view, the man who’d become my husband, and walks around campus at dusk, among so many other things. But little did I know what Stanford would give my grieving 50-something self: the gift of walking where my dad once did, envisioning his clothes and conversation, a gift that brought him closer in when he’d felt farther out, the gift of a memory walk.

I wasn’t with him when he spun out from us, but I can be with him here, and now, amid mortar and memory, in this place of layered time.

Alison Davis, ’79, is a freelance writer who lives a 25-minute drive from Encina Hall.