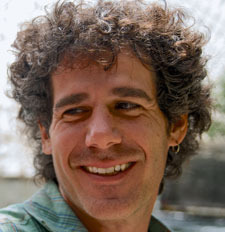 While it may at first seem odd for a marine biologist to work in national security, it made perfect sense for Rafe Sagarin, a Guggenheim Fellow and university researcher who embodied the very evolutionary principles he studied.

Raphael David Sagarin, '94, died May 28 outside Tucson, Ariz., after being struck on his bicycle by an allegedly drunk driver. He was 43.

To understand how a marine biology researcher ended up working for the U.S. Department of Defense on disaster preparation, you have to look back to his earlier years.

An outspoken young man, Sagarin championed numerous causes at Stanford—for example, protesting the structure and inefficacy of the student senate by campaigning on a promise never to attend a single meeting. He received the fourth-highest number of votes, securing him a seat he dutifully left unfilled.

He also got involved with Students for Environmental Action and opted to live in Terra House (a co-op for ecologically conscious students). In a Stanford Daily letter to the editor, Sagarin asked, "Have the [university] budget committees given serious thought to cutting energy consumption, rather than budgets, as a means of reaching our economic goals?" He was quick to point out that slight reductions in waste and consumption would yield benefits for the budget, the planet and departments saved from the ax.

Sagarin earned a PhD in 2001 from UC-Santa Barbara, studying the effects of climate change on coastal ecosystems. He was poised for a traditional academic track when an appointment as a Congressional Science Fellow brought him to Washington, D.C., shortly after 9/11. He later recalled of the experience, "The environmental issues that I thought I would be working on weren't very prominent in that Congress."

Identifying numerous ways Washington could and should evolve, Sagarin synthesized his ideas into a 2012 book, Learning from the Octopus: How Secrets from Nature Can Help Us Fight Terrorist Attacks, Natural Disasters, and Disease.His professional passion, however, remained in the tide pools, and in his last years, as an associate research scientist at the University of Arizona, he directed the oceans component of Biosphere 2, a miniature replica of Earth's varied ecosystems.

As news of his untimely death rippled through the community, outpourings of love flowed in from across the country. The most touching came from his wife, Rebecca: "What I think he would want more than anything is for all of us to . . . go out into the world believing that our ideas do matter, that we have the power to do things and change things and live an incredible life."

Mike Vangel is the editorial assistant at Stanford.

A momentary lapse of integrity can be enough to scare you straight.