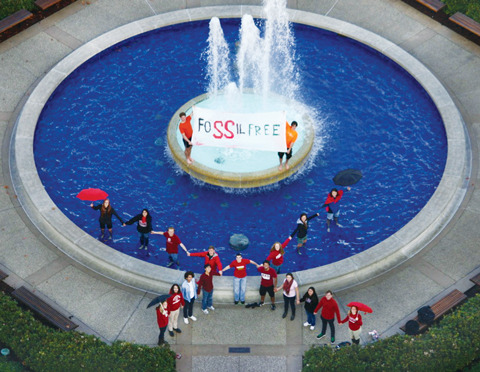 In decades past, Stanford students have successfully lobbied the administration to withdraw its endowment investments from holdings supporting apartheid, tobacco and Sudanese actions in Darfur. Now a small but committed cadre of students is driving an effort to eliminate fossil fuel companies from the University's investment portfolio. The student group Fossil Free Stanford combines old school shoe leather activism with social media to get its message out. "Our goal is for Stanford to freeze all new investment in fossil fuel related [holdings] and to divest fully within five years," says Sophie Harrison, '16, one of the group's founders.

Fossil Free Stanford formed in 2012 as part of a nationwide effort spearheaded by 350.org, which seeks to influence global climate policy by catalyzing grassroots movements. (350 refers to the upper limit of atmospheric CO2 in parts per million that scientists have deemed safe; the current level is about 400ppm.) The initiative specifically targets investments in 200 publicly traded coal, oil and gas companies that control the lion's share of the world's fossil fuel reserves, the production and use of which contribute to global warming, air pollution and environmental degradation.

Harrison and a core group of about 15 students have generated support through "dorm storms"—going door-to-door at the larger dormitories to raise awareness of the issue—and through a Facebook page and online petition which, at press time, had 1,360 signatures. Last spring, Fossil Free Stanford successfully lobbied the ASSU Undergraduate Senate to pass a resolution supporting fossil fuel divestment. The group also is working with the Office of Investment Responsibility's Advisory Panel on Investment Responsibility and Licensing (APIRL). The panel comprised of students, faculty, staff and alumni advises the Board of Trustees and President John Hennessy on investments in businesses whose practices could cause "substantial social injury."

Stanford has long been a leader in sustainable investing. The University adopted a Statement on Investment Responsibility—the first of its kind by a major academic institution—in 1971. And most recently, in 2005, it was among the first to divest from businesses supporting the Sudanese government in condemnation of the genocide carried out by the regime in Darfur. But University officials note that the case for divesting from fossil fuels is murkier. "Only when an investment is contrary to clear ethical principles which are widely held across the University community would divestiture be considered," says Susan Weinstein, the assistant vice president for business development. She points to Stanford's past divestment from companies with operations in South Africa, as well as in the tobacco industry, as examples of that philosophy.

Another consideration for all divestment decisions, Weinstein adds, is "the Board of Trustees' fiduciary obligation to maximize the financial return on Stanford's investment." There is also concern that once it is no longer a stockholder, the University loses the opportunity to influence company management. Through the proxy voting process, for example, Weinstein says Stanford is able to share its views with management and shareholders. The Stanford Management Company oversees the University's holdings and hires private money managers to make investments for the endowment, currently valued at $18.7 billion.

Members of Fossil Free Stanford acknowledge these are significant obstacles to overcome. But they also say it is a prime opportunity for Stanford to make a significant statement on fossil fuels that goes beyond hard numbers and financial documents. "Even a symbolic gesture is a huge way to drive change," says Erica Knox, '16, an outreach leader for the group. "As an educational institution, Stanford is an incubator of what the future is going to be, what kind of world we are going to build, and [fossil fuel] divestment speaks directly to that. It's a chance for Stanford to be a leader and a role model for other universities."

Following a November meeting with representatives of the student group, APIRL indicated that it could be ready to make a recommendation to the Board of Trustees by its last meeting of the academic year in June. Meanwhile, Fossil Free Stanford plans to continue its advocacy work and is exploring alternative investment strategies. One possibility is the establishment of an escrow account alumni and others could contribute to, with funds to be released if the University moves to divest. Stanford students in the 1980s successfully used this approach during the apartheid divestment movement.

Thus far, only a handful of colleges and universities in the United States, including Hampshire College and San Francisco State University, have agreed to divest from fossil fuel stocks. Other schools, including Harvard University and Pomona College, have decided not to rid their endowment portfolios of fossil fuel holdings. "The fact [that] it is so hard to divest says something about how integrated fossil fuels are in our economic system," says Harrison. "Stanford has a unique opportunity to make a strong statement that we can no longer put off change."

Hugh Biggar, MA '04, is a writer based in Sacramento and the Bay Area.

Sing a Song of Stanford

Alumni and Their Oscar Moments