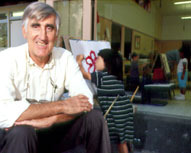 If you want to advance your kids' development, forget computers and buy them Legos and crayons.

That's essentially the advice of education professor Larry Cuban, PhD '74, and fellow educators, doctors and child-development experts who describe what they see as the false allure of computers in classrooms for young children. In a report that made national headlines in September, the Alliance for Childhood called for a moratorium on buying computers for elementary schools and urged parents to look at specific health hazards that can result from hitting the keyboard too early in life.

Cuban, who has been writing about technology in schools for more than 15 years, was hardly surprised by the findings of the advocacy group. "Technology is an unalloyed good in the American value system and has always been seen as a kind of handmaiden to the economy," he says. "Computerization is taking place in an economy where people are insecure about their skills in getting good jobs, and the idea is that you've got to start young with kids."

In his 1986 book, Teachers and Machines (Teachers College Press), Cuban documented how business entrepreneurs, including Thomas Edison, have long tried to get schools to adopt new technologies of film, radio and instructional television. Cuban will revisit that theme in a study of Silicon Valley classrooms due out next year, Oversold and Underused: Reforming Schools Through Technology, 1980-2000 (Harvard University Press).

With help from graduate students Heather Kirkpatrick, Huey Ru Lin, Craig Peck and Lawrence Tovar, Cuban compiled his own empirical data instead of relying on the often inflated self-reports of administrators and superintendents. "What makes my study uncommon, I think, is that I actually went into schools, observed teaching and shadowed kids as they moved from class to class," he says. "Do the new technologies really mean that teachers are teaching better, that kids are learning more? Those are the kinds of questions that haven't been asked until now."

Certain types of tutorial software--so-called "drill and kill" software in which, for example, kids blast falling letters out of a virtual sky--have had modest effects on academic advancement, Cuban says. But he's not concerned only about classroom use, he observes in his upcoming book. "The biggest market for little kids, in terms of software, is the home market," he says. "And you have to remember that we are talking about a very strong belief system wedded to economic interests in a valley that sells an awful lot of technology to schools and to kids."

High Court Will Take a Swing

A Guiding Light Goes Out

Paralyzed at 16, Joe Cavanaugh makes it his business to help others see possibilities.