Keeper of the Kelp 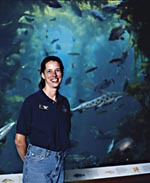 Picture a giant fishbowl where 335,000 gallons of seawater surge back and forth as towering kelp fronds dance to the rhythm. Leopard sharks circle over sponges and crabs. A larger creature glides in, attracting curiosity. The creature is Barbara Utter.

Utter, an aquarist at the Monterey Bay Aquarium, regularly dons scuba gear to tend the kelp forest exhibit. She prunes the kelp and siphons out debris while dodging Bubba, the nippy sheephead, and cavorting with an “endearingly ugly” wolf-faced eel. Her job goes way beyond maintenance, however. “What I love is the chance to do many different things,” she says, “like collecting algae, invertebrates, tuna and sharks, diagnosing diseases, writing papers, and giving talks and tours.”

At home, Utter tends an aquarium of her own, filled with freshwater fish from all over the world. Obviously, she’s hooked.