Attorney Luz Herrera left the big-firm world to represent blue-collar workers in Compton, Calif. The decision has not been without costs. 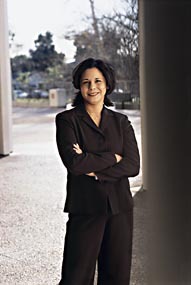 But rather than pull down a six-figure salary as a corporate lawyer, the Stanford- and Harvard-educated Herrera earns about $26,000 per year as a sole practitioner in Compton, Calif. She opened her office in May 2002, not far from the epicenter of the 1992 Los Angeles riots. It sits next to the Mega 99-Cent Discount Store and down the street from plenty of boarded-up and dilapidated buildings on Compton Boulevard.

Herrera, ’95, MA ’95, provides legal services—primarily family law, estate planning, real estate and small business transactions—to a largely underserved population. More than a million Los Angeles County residents speak Spanish at home and do not speak English well, according to the U.S. Census Bureau. Although the State Bar of California does not track numbers of Spanish-speaking lawyers, a recent survey of its members found that there are only about 7,000 Latino lawyers in the entire state.

This explains why many of Herrera’s clients—blue-collar workers who remind her of her own relatives and neighbors—drive to Compton from hours away, often with no clue as to her educational pedigree. They are relieved to be able to communicate fluently with the person translating the U.S. legal system for them. Herrera charges her “more sophisticated” clients $150 per hour. In other cases, she charges flat fees based on the legal matter at hand and the client’s financial situation—amounts far below the $180 to $300 hourly rates she estimates her Harvard Law School classmates command elsewhere. “For [a client] who makes $10 or $12 an hour, how can they even relate to that?” she says.

Herrera isn’t starry-eyed about her work. “I don’t know how much longer I can do this, to be honest. I’d be a lot more comfortable if I were making money,” she says. “I share that pathetic ‘justice-for-all’ attitude,” she adds with a wry smile.

The day before Thanksgiving, Herrera appeared in the Riverside County courthouse representing a single mother named Maria Gonzalez. A man had agreed to buy Gonzalez’s house, then failed to make payments. After Gonzalez sold the house to someone else, the man sued.

Herrera acknowledges that, as in many cases, neither party has behaved perfectly. “I do feel [Gonzalez] is being taken advantage of, but she also could have done things differently to protect herself,” she says. Nevertheless, as she makes clear to the judge, she does believe her client deserves to prevail as a matter of law.

Herrera makes a motion to dismiss the case, pointing out that her opposing counsel has not complied with any of her requests for documents. “We believe that they don’t really have a case,” she tells the judge.

A few minutes earlier, the judge was joking convivially from the bench with another lawyer. But his tone turns dismissive as he addresses Herrera (who, at 5-foot-2, knows she looks younger than her 31 years). “What you should have learned from the earlier cases that were called is that the court does not entertain oral motions,” he says. Herrera points out that she has indeed filed a written motion. The judge, although correcting himself, is unmoved.

“Think of what judges see when they look at my name on a document,” Herrera muses later. A judge sees her name and the city in which she practices. “Compton is not known for its lawyers,” she says. He sees Herrera’s bar number, indicating that she passed the California bar exam rather recently. He doesn’t see her educational credentials.

“For all he knows I just took a correspondence course,” she says. “If my address said Beverly Hills or even Costa Mesa, it’s like, okay, this person competed with someone else to be here.”

Such slippery disadvantages compound the price of passing up a law career in a ritzier locale. Not that Herrera doesn’t put this perceived handicap to good use when she can. Sometimes, she says, she lets opposing attorneys underestimate her, “and then I go in and kick their butts.”

Herrera grew up in Whittier, Calif., the only child of two immigrants from Mexico. Sometimes, when she was in grade school, her parents worked nights cleaning local office buildings. Herrera accompanied them, completing her homework at vacant desks.

A teacher noticed her sharp intelligence and urged her into a gifted program. Herrera relied on scholarships and grants to attend Stanford and Harvard. In both places, she focused much of her energy on fighting for social justice in a variety of forums.

After earning her law degree in 1999, she joined the real estate department of a large San Francisco law firm with a progressive reputation. She spent two years there, but quickly became disillusioned. “The problem with corporate law firms is that unless someone takes you under their wing or you become a ‘yes’ person and lose your own identity, the chances for success there are minimal,” she says. “It is heightened if you have no partners or senior associates that look like you. It works for some people, but I [had] worked too hard to trade in my opinions and politics for a six-figure salary.”

After leaving the firm, she traveled in Latin America and worked for a sole practitioner in Huntington Park, Calif., where she learned some family law. When another sole practitioner retired, leaving his Compton office available for rent, a sizable circle of former classmates, professors and other boosters supported Herrera’s decision to strike out on her own.

Gabriel Sandoval was one of the first to jump in, scrubbing, mopping and painting Herrera’s modest new office. He himself had given up a $165,000 job as an employment lawyer to spearhead a Los Angeles city attorney’s task force that combats fraud against immigrant communities, and he urged Herrera to set aside financial concerns, at least for now. “She has the ganas, the passion, the will,” says Sandoval, ’93. “You see the passion in her eyes. You can’t deny that. You need to explore it. Who knows what will come of it two or three years down the road?”

“I see her stretching beyond her wildest imagination. The struggle is transforming her,” says Russell Castañeda Calleros, ’94, the campus minister for community services at Loyola Marymount University. “The experience has shown her how important it is not only to use her God-given strength, but to tap into the strengths of other people.” When Herrera needed an intern, for example, she had the student solicit donations from Herrera’s friends and former colleagues. The effort produced a $2,500 summer stipend.

But even with that kind of support, Herrera is very much on her own. “It’s a daily lesson in courage,” she says. “There isn’t a day that I wake up when I don’t think, ‘Am I going to make the right decisions today?’” And representing legally unsophisticated clients, she says, is challenging. “I often have difficulty getting clients to focus on things that are important to their case,” she says. “Most don’t understand the legal process.” Add to that the financial pressures of the practice, and it’s clear why Herrera almost shuttered the office last fall.

But her work brings an occasional hard-won triumph. The same day Herrera represented Maria Gonzalez in court, she also saw a couple whose relationship had been so strained several months earlier they could not sit in the same room. On this day, the pair talked and laughed nervously, relieved to see Herrera putting the finishing touches on their divorce agreement.

After they left, Herrera said, “It wasn’t always like this. It was ugly. He tried to run her over with a car. We had restraining orders out. Their kids had their own lawyers. I never thought I’d see this day.” Often drawn and determined, Herrera’s face momentarily relaxes into a wide, satisfied grin.

Still, Herrera is sketching out exit plans. “In order to attract the more sophisticated client base, I know I have to leave Compton,” she says. “Few want to come park their BMW or Mercedes on Compton Boulevard.” She hopes to lease a small second office, perhaps closer to her home in Whittier, later this year—a place where more affluent clients feel comfortable but where Herrera can still charge reasonable fees. In two to five years, she would like to leave behind a nonprofit office in Compton where recent law school graduates and paralegals could come to learn about “real-life” legal work.

All of this, Herrera admits, is subject to change. She keeps in mind something a friend once told her: “If you make plans, God will laugh at you.” Or, in her own words, “I expect the unexpected.”

ANN MARSH, ’88, is a freelance writer in Costa Mesa, Calif.

What Freshmen Need to Know

Few would deny that the humanities are crucial to a Stanford education. But exactly what do you teach, and how?

A Record Crop of Scholarship Winners