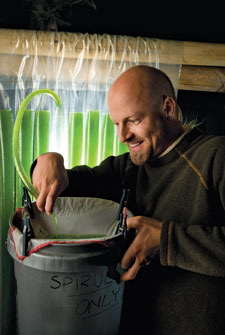 On a hot summer's day, a half-dozen people have gathered in a borrowed Oakland loft to learn how to grow algae in their homes. Their instructor, Aaron Wolf Baum, is lanky and tan with jade green studs in both earlobes and a rat tail down the back of his otherwise shaved scalp. He speaks with thoughtful precision. Growing algae is farming for the 21st century, he says, "a century where humanity is going to have to learn how to live within its means." On the tabletop in front of him are a 10-gallon glass fish tank and the components of the algae-growing kit he sells: a coil of plastic tubing, Ziploc baggies filled with white nutrient powder, a glass dropper bottle, and other mysterious odds and ends.

For his day job, Baum is a senior scientist for NASA's OMEGA Project, which aims to grow algae in plastic bags floating atop the ocean, then harvest their oils for biofuel. After earning a doctorate in applied physics, Baum, PhD '97, spent a few years working in Silicon Valley, then a few more as an artist before turning his attention to algae as an alternative source of food and fuel. In 2008 he founded AlgaeLab, a communal workspace built into an old shipping container in Berkeley, to demonstrate that anyone could grow algae using only recycled products—55-gallon drums and soda bottles. "What I discovered there is that people are very enthusiastic about building things; getting them to maintain things is a whole other story," he says wryly.

While algae-based biofuels have gained buzz in recent years—thanks in part to the interest of research giants like NASA and pressure from the EPA to boost the quotient of renewables in the nation's transport fuel supply—algae grown for food is a larger and better-established market. It started with the "nutraceuticals" craze in the 1970s, says Baum, and today there's revived interest in "superfoods" and "green drinks," which often include spirulina. Baum's edible alga of choice, spirulina is shaped like a microscopic spring. A trip to the Simplicity Spirulina Farm in India in 2009 convinced him that the live version was vastly superior to the dried variety commonly sold in health food stores.

Because spirulina has a thin cell wall, it's an easily digestible source of protein and antioxidants. Plus it grows in an alkaline solution that's hostile to invading bacteria, making it a safer bet for the home grower. From one 10-gallon tank in a sunny window, Baum estimates you can extract about one nutrient-dense tablespoon every other day. Still, the casual home-farmer would be hard-pressed to grow enough for an algae-only diet. "It is best used to supplement a light diet of fruits, vegetables and nuts," he says. (Baum augments his own intake of 15 to 20 grams a day with the powdered version.)

Today's students include health-food enthusiasts, people interested in disaster survival and the merely curious. Oakland resident Margo Brooks is interested in going one step beyond ordinary home gardening. "I just want to be more sustainable," she says. "I want to be able to grow my own food." San Francisco artist Matt Waggle is there to suss out the mechanics of growing algae in suspended glass bulbs as part of an installation.

Baum carefully shows them how to set up a tank and avoid mishaps such as getting electrocuted by the water heater cord. He offers tips on storage (live algae can last three days in the fridge, but should be treated "like sushi or raw eggs") plus a few serving ideas. Baum recommends mixing spirulina with savory liquids like miso soup, gazpacho and salad dressing. His girlfriend and collaborator, Massey Burk, says she drinks it with carrot juice. There is also a less appetizing discussion of the recipe for growing "survival spirulina" in a post-disaster scenario using water, ash, dilute urine and iron nails soaked in lemon juice.

Baum knows that not everyone thinks of algae as lunch. "People in general don't want to eat what they think of as pond scum," he says with a shrug. But the class is game so the workshop ends with a taste test. Baum scoops the dark green fluid into a length of clear plastic tubing, then releases it over some screenprinting cloth that's been clothespinned to a bucket. The spirulina clings to the cloth in rivulets; Baum squeezes the remaining water out, then lets everyone dab a finger into the buttery emerald paste.

"Creamy," murmurs Brooks. The spirulina is surprisingly odorless for a substance so verdant, and the tasters agree that it doesn't have much flavor—certainly not one that smacks of the pond. Says Burk, "Tastes like photons."

Kara Platoni is a frequent contributor who lives in Oakland.

What They Brought Home With Them Won't Fit in Any Suitcase

An outdoor education that bends the mind and stirs the soul.

Straight From the Heart