In the Belly of the Boat

Jessica DuLong loves the physical demands of her job operating a famous fireboat. 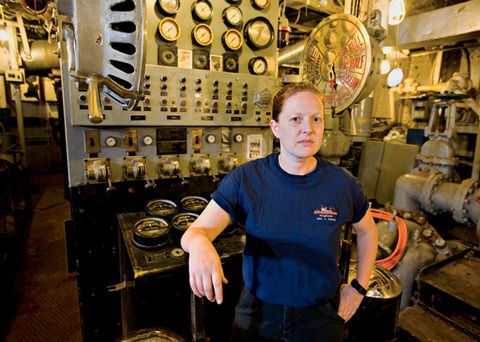 Nearly eight decades old, the John J. Harvey, a New York City fireboat, is retired from its days of patrolling the harbor and dousing dock flare-ups. Now it operates as a roving restoration project with standing in the National Register of Historic Places. But the aging technology still packs a wallop. To delight tourists, schoolchildren and other passengers, the ship's five diesel engines can still suck up Hudson River water and send it gushing through the air at the rate of about 18,000 gallons a minute—an output equivalent to 20 fire trucks—with enough force to punch a hole through a concrete wall.

The dichotomy between that force and the engine-room operator who makes it possible is one of the boat's biggest surprises. At 5-foot-5, the Harvey's chief engineer, Jessica DuLong, '00, has to stand on a wooden crate to operate the ship's machinery, translating the orders of the wheelhouse pilot above her into the complicated lever-pulls that power the ship. A graduate of the Phillips Exeter Academy and a psychology major at Stanford, DuLong doesn't have the résumé typical of a ship engineer. After graduation, she worked as an editor at an online start-up. But when the dotcom bubble popped in 2000, a few fortuitous volunteer days aboard the Harvey led to a new job. It was "a blissful accident," she says.

By now, DuLong is a salt, so at home in the engine room that her nose can tease apart the strands of its pervasive stench: an "exhaust-fume bouquet wedded with a richer base note of lube oil and a trace of bilge bacteria," as she writes in My River Chronicles: A Personal and Historical Journey. The book, newly in paperback, is part memoir and part New York waterfront history, spanning the days from Henry Hudson's first exploratory trip in 1609 to the terrorist attacks of 9/11, when the Harvey briefly returned to service, again pumping river water to help fight flames in lower Manhattan.

Even when the boat's mission is shepherding schoolchildren instead of dousing fires, the work below deck is exhausting. When I step onboard after one of the Harvey's summertime trips, DuLong is sweat-soaked and out of breath, hankering for a reprieve from the hot engine room. Over a rum and Coke up top, watching the sun set over New Jersey, DuLong tells me that exertion fuels her love for the Harvey. "I really believe that having a physical connection with the world around you is absolutely crucial."

The push-and-pull between the work of the mind and work of the body is a constant theme in DuLong's life. After the intensely scholarly environment of prep school, this daughter of a Massachusetts auto mechanic "felt like everything was theory and reading and writing and not actually doing stuff." She took some time to work in restaurants and at a preschool, then hit a juncture. "I got the date for my firefighters' civil service exam and my Stanford acceptance right around the same time," she says. "I was ready to invest wholeheartedly in the world of the mind."

But not forever. One day, at her dotcom job, a technical glitch caused her team to lose six months of work. "The virtual world I'd been feeding off had suddenly left me sucking air," she writes in My River Chronicles. "That night I realized what was missing: the feeling of holding your work in your hands." That feeling intensified in the wake of 9/11, when "suddenly an Ivy League education seemed far less useful than knowing how to use a cutting torch." To this day, DuLong tries to bridge two worlds, juggling freelance writing assignments for publications such as CosmoGIRL! and Rolling Stone between stints in the engine room.

The Harvey's retirement home is Pier 66, just west of Manhattan's Chelsea neighborhood. The dock doubles as a bar and nightclub, and on a typical summer Friday evening, visitors to the boat have to thread past hundreds of tipsy twenty- and thirtysomethings to reach the boarding ramp. "My haunt is now a complete mob scene," DuLong says. But even in this there is a lesson: After all, there are plenty of more conveniently located places where young revelers can drink. To DuLong, the crowds at Pier 66 show that "we're all hungry for authenticity. Here, you're not just near the water—you're on the water."

Barrett Sheridan, ’06, is an editor at Bloomberg Businessweek.

A former police chief and a former White House drug policy adviser weed out the arguments on Prop 19.