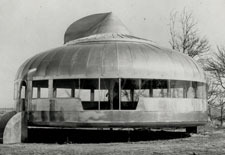 A reporter once asked Buckminster Fuller—the American systems theorist, architect, engineer, author, designer, inventor, environmentalist and futurist—how someone could learn what he knew. He answered simply: "Read my books."

One might start at the Stanford Libraries, which acquired Fuller's papers in 1999. It's one of the most extensive personal archives anywhere—pretty much every substantive piece of paper, film photography or audio tape that ever passed across his desk. About 380 hours of audiovisual material have been digitized and are available on the web, including his notorious lectures that went on for hours and a video of his conversations with San Francisco hippies. (Drawing on this collection, the San Francisco Museum of Modern Art has mounted The Utopian Impulse: Buckminster Fuller and the Bay Area, continuing through July 29.)

Fuller's signature effort was refining the geodesic dome, a super-lightweight yet extremely strong structure. But there was so much more. Under the Dymaxion concept (for "dynamic maximum tension"), he aimed to achieve the greatest possible efficiency and economy in a number of inventions. His aluminum Dymaxion House features a single pole as structural support, natural heating and cooling, self-generating power, stormproof design and maintenance-free materials—all weighing in at 3,000 pounds and priced like a Cadillac. The 11-passenger, three-wheeled aerodynamic Dymaxion Car he designed in the 1930s got 30 miles per gallon and could reach 90 mph. 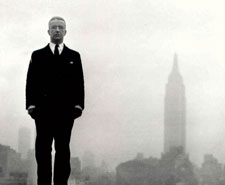 Fuller kept exhaustive, meticulous notes in a mad-scientist system he called the Dymaxion Chronofile—about 270 linear feet of its records anchor the archive. More scrapbook than conventional diary, it begins with the year of his birth, 1895. The collection documents hundreds of Fuller's design artifacts, inventions and cartographic works and includes more than 1,000 sketches. Stanford even has his 26-foot "Fly's Eye Dome."

Clearly, he had a lot to say—and he was invariably inventive in the way he said it. "I live on Earth at present, and I don't know what I am. I know that I am not a category," he wrote. "I am not a thing—a noun. I seem to be a verb, an evolutionary process—an integral function of the universe."

Like Bill Gates, "Bucky" Fuller left Harvard sans degree, but he collected 40 honorary doctorates, as well as the Presidential Medal of Freedom shortly before his death in 1983. Always on the go, he famously wore three watches: one for his current time zone, one for the zone he had departed and one for his next destination.

Cynthia Haven is the associate director of communications at Stanford University Libraries.

A Stroll Down Memory Lane

Performance hike' is a walk to remember.

The Mayer Factor: A Forecaster's Take on Yahoo's Future