I’ll Have Flies with That

When selling plants is a killer business.

Josh Brown was at a crossroads in 2009 when he pulled into the parking lot of California Carnivores, one of the largest and oldest carnivorous plant nurseries in the United States. He’d been there many times before as a customer, but this time, he was preparing to enter the industry that would soon consume his savings. He glanced out his driver’s side window, then did a double take. Sitting in the car next to him was Drew Martinez, ’07, a former Stanford wrestling teammate he hadn’t seen since graduation. Brown briefly considered walking inside without acknowledging Martinez to avoid a potentially embarrassing conversation about the unusual hobby he’d had since childhood.

“What are you doing here?” Brown, ’06, asked as they emerged from their cars near a large metal sculpture of a Venus flytrap.

“I’m here to give a presentation on carnivorous plants,” Martinez said. “What are you doing here?”

“I’m here to listen to a presentation on carnivorous plants.”

Only then did the men discover that they’d both harbored vicious vegetation in their dorm rooms. For Martinez, it was meat-eating pitcher plants on the windowsill. For Brown, it was pitcher plants, sundews, and butterworts in a fish tank under his bed. “You don’t want to tell people you have plants growing under your bed,” Brown says. “Then you become the weird plant guy.” But he was the weird plant guy, and so was Martinez.

In the 13 years since that parking lot reunion, both have built profitable nurseries that sell flesh-eating flora to customers around the country. Brown owns Predatory Plants in Half Moon Bay, Calif., where he ships out thousands of carnivorous plants every month. Martinez owns Carnivero in Austin, Texas, where his rare offerings are so prized that one earned a mention from Guinness World Records. Their merchandise—once it’s mature—can not only trap flies but also digest lizards and even, it’s been said, ensnare monkeys.

While carnivorous plants are found on every continent except Antarctica, the species are geographically isolated, each suited to grow in precise and inflexible conditions, like a single hilltop in Borneo or a small boggy stretch in the Carolinas. U.S. nurseries have historically imported the exacting commodities from abroad; Brown and Martinez are among a handful of U.S. businesses with labs that clone and propagate them en masse. It’s a painstaking process, but producing their own supply helps meet consumers’ seemingly insatiable demand and reduces the culling of plants in the wild. With collections started in middle school and decades spent perfecting technique, they’ve become two of the largest carnivorous plant retailers in the country—each carving out a niche in a pugnacious world far from Stanford’s wrestling mats. 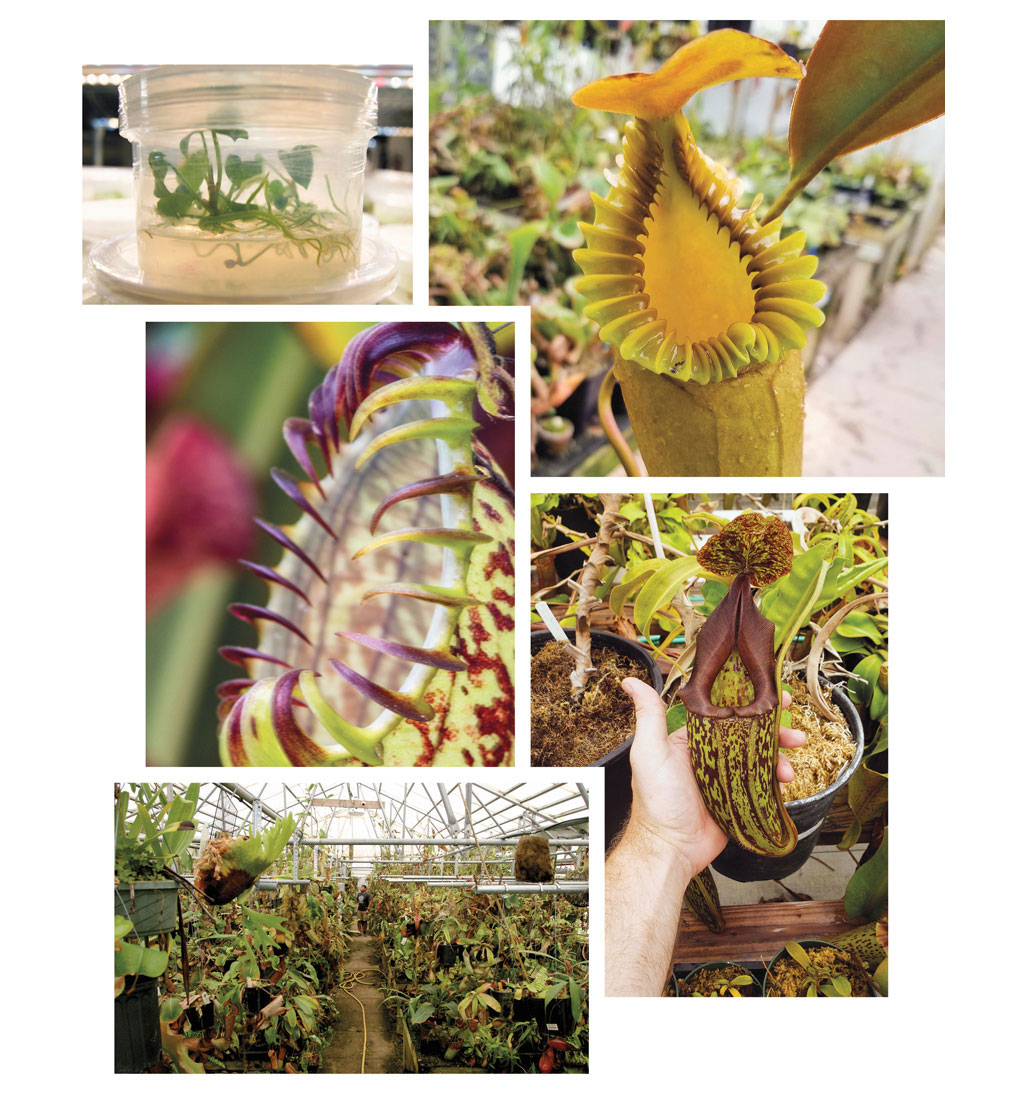 Brown first visited California Carnivores when, at 13, he needed plants for a science fair project. His mother drove him 90 miles from Half Moon Bay to Forestville to buy Cape sundews—small, tentacled plants beaded with sticky droplets that trap insects. Not long after, they returned to buy a pitcher plant—which he later named Maiden—and his obsession took root. “I still have that plant,” he says. At least 24 years old, it stands tall in his greenhouse, surrounded by offspring Brown grew by propagating its seeds.

Almost all carnivorous plants are native to bogs, where the soil is saturated with slow-moving water that carries away essential nutrients. To survive, carnivorous plants adapted to seek nitrogen, phosphorus, and potassium from an alternative source: meat. Once prey is trapped, most carnivorous plants secrete digestive enzymes to dissolve the victim’s soft parts, leaving only a shriveled exoskeleton. The founder of California Carnivores, Peter D’Amato, describes gruesome results in his bestselling book The Savage Garden. The artistic, cup-shaped leaves of pitcher plants, he explains, are filled with tempting fluid and become a “madhouse prison” as ants, wasps, and flies slip in, panicking together before drowning.

Martinez was 12 when he first saw the predation in action. While visiting their aunt and uncle in San Francisco, Martinez and his brother were treated to a trip to California Carnivores. Plagued by the hot, dry climate of his native Phoenix, he’d grown up enamored with rich, tropical landscapes. “Carnivorous plants were the epitome of that,” he says. “Really unique and really bizarre.” It wasn’t long before he was borrowing his father’s thermal physics textbooks to teach himself how to construct greenhouses to keep his plants alive in the Arizona heat. After Stanford, he nurtured his interest in plant cultivation with jobs at Pacific Biosciences and Google X, where he honed lab techniques and developed expertise in optics that later helped him engineer specialized grow lights. In 2009, his resolve to start a nursery was cemented during a trip to Borneo led by biologist and wildlife photographer Chien Lee. Peering out the window of a Twin Otter plane as it glided over a national park, Martinez saw that the land beyond the park’s border had been stripped bare by development. He realized a nursery could help preserve bio-diversity. “It had a pretty profound effect on me,” he recalls. 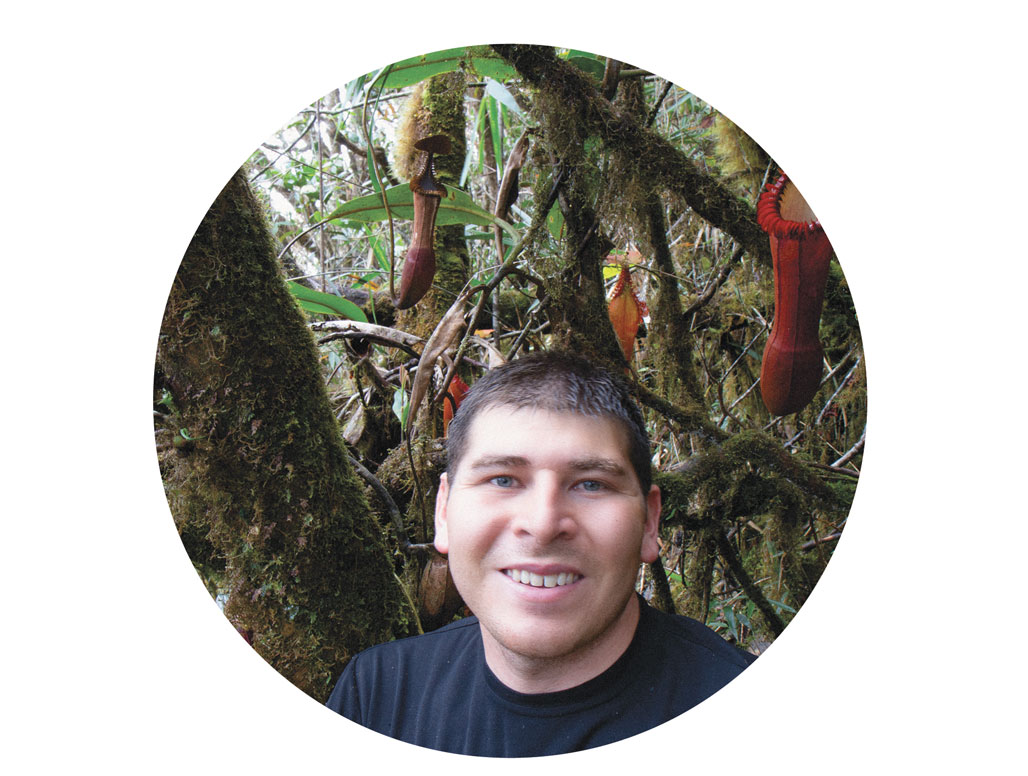 ‘The allure of Nepenthes is they are the type of iconic carnivorous plant that people dream up.’

Brown, meanwhile, was working at Microsoft, thinking he would grow and sell carnivorous plants out of his Mountain View apartment as a side project. One day in 2009, he went on Craigslist and typed in “greenhouse,” looking for something that would fit on his outdoor deck. The first listing for “greenhouse space in Half Moon Bay” was much bigger than he’d planned but had an address just two miles from his childhood home. He set up a visit, called in sick to work, and drove to the coast. The 1,000-square-foot greenhouse set his mind in motion. In less than 48 hours, he tracked down the world’s four major carnivorous plant wholesalers, registered the domain name predatoryplants.com for $7, and gave notice at work.

Later that year, Martinez and Brown decided to jump-start their inventories with help from Sri Lanka–based Borneo Exotics, one of the world’s largest exporters of lab-grown plants. “I did my first order with them at Drew’s kitchen table in East Palo Alto,” Brown says. “I still have that paper somewhere.” For the next few years, they continued to work in tech while building their businesses, but by 2016 they’d both committed to their nurseries full-time.

The Venus flytrap, with its clamshell-shaped jaws that quickly snap shut, is the most recognizable carnivorous plant, and both Brown and Martinez sell it. But the plant is temperamental, stays dormant for three months out of the year, and doesn’t do well indoors, where most customers keep theirs. (Brown says he is not a fan of it.)

Instead, the crown jewel of their nursery operations—the genus that captivated Brown and Martinez as children—is the tropical pitcher plant, or Nepenthes. “If there is a royalty among carnivorous plants,” writes D’Amato in The Savage Garden, “that distinction surely belongs to the Nepenthes.” Notoriously tough to cultivate, this was the plant that earned Martinez a nod from Guinness World Records. His brightly colored Nepenthes veitchii sold for $3,500 in 2020, making it one of the most expensive carnivorous plants on the planet.

“The allure of Nepenthes is they are the type of iconic carnivorous plant that people dream up,” says Martinez. Famous for their highly evolved leaves, which form waxy, pitcher-shaped bowls of fluid, tropical pitcher plants attract collectors and poachers alike with their variety. Pitchers can be as soft as petals, as hard as wood, rimmed by “fangs,” speckled or striped. Martinez and Brown occasionally pull dead rodents from the pitchers that hang in their greenhouses, and rumors persist that in Malaysia, shop owners remove drowned baby monkeys each morning before customers arrive.

The epicenter of Nepenthes distribution is in Southeast Asia, where Borneo Exotics produces a significant portion of the world’s supply in its labs. “Not everybody’s capable of doing that,” says Stephanie Howlett, co-owner of Texas-based PetFlyTrap.com, which has been selling carnivorous plants since 1993. “Most places aren’t equipped for it.” Howlett says she can count the number of large-scale carnivorous plant nurseries in the United States on one hand, Brown’s and Martinez’s among them. 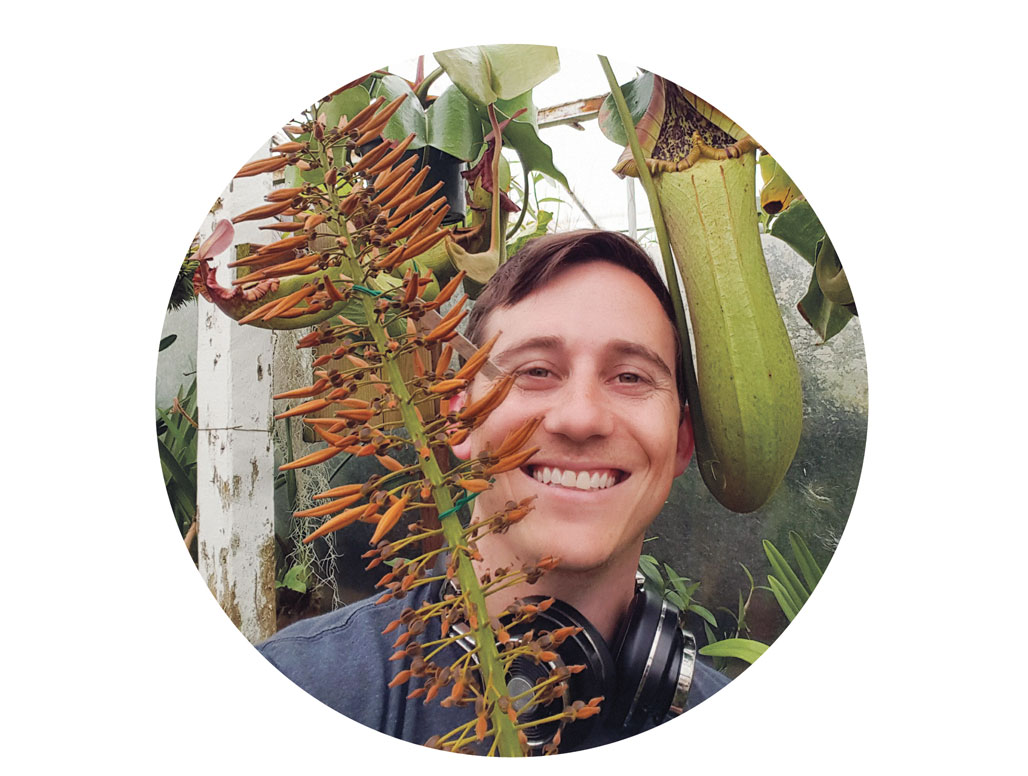 ‘You don’t want to tell people you have plants growing under your bed. Then you become the weird plant guy.’

To understand why there are so few, consider a pitcher plant’s life cycle. “Each plant,” Brown says, “is either a male or a female at birth, and there’s no way to tell until you flower them. They don’t flower—at least the ones that I grow from higher elevations—until they’re 5 to 15 years old. You need to flower simultaneously a male and a female because the pollen doesn’t store very well, or at least we’re just now figuring out how to store the pollen.” After pollination, it takes four months for a seed to ripen, two months for the seed to germinate once planted, and two years for the plant to grow big enough to sell.

Brown prides himself on volume and says Predatory Plants is now the largest producer of seed-grown Nepenthes in the nation. “I am not a plant nursery that sells online,” he says. “I am a logistics company that grows plants.” Carnivero, too, is one of the country’s largest retailers, but its ethos is decidedly flora-first. After relocating from the Bay Area to Austin, Martinez built his own lab, where he focuses on cultivating rare, expensive plants. The 400-square-foot room houses 10,000 containers of agar, each holding the tissue of future plants, including some of the most endangered species in the world.

Lee, the wildlife photographer from Borneo, remembers the popularity of carnivorous plants exploding in Western horticulture and in Indonesia in the early aughts, spurred along by the education—and sales—made possible by the internet. He saw critically endangered species being sold by the kilo. And on a recent trip to Malaysia’s Maliau Basin, he discovered pitcher plants he’d been photographing for decades either withering or dead from the stress of recent droughts. COVID-19 shutdowns further drove interest in plant cultivation around the world as people cast about for ways to keep busy indoors. The hope of Martinez, Brown, and other nursery owners is that they can keep up with demand while helping species survive on a changing planet. “It’s very important to have these nurseries,” Lee says. “If there was no propagation at all, then these plants would really be devastated in the wild.”

In 2020, California Carnivores permanently closed its physical shop in order to focus on online sales. The closure leaves Predatory Plants as the only carnivorous plant nursery in the United States with a brick-and-mortar storefront, though one other nursery is close behind: “We actually have the storefront greenhouse structure already on-site and are ready to build,” Martinez says. When he opens to the public (he’s just awaiting permits), he’ll know just who to turn to for advice. He and Brown regularly bounce ideas off of each other, discussing everything from email marketing to greenhouse design in ways many competitors might not. But they never exactly thought of themselves as competitors.

They started on the same team, after all.

6 ways to help the environment using your own fridge.

Alfred Nash found his avocation right under his nose.