Q: Is it possible and practical to consider using existing automotive hybrid technology as a means of propulsion for a boat?

As an avid water-skier and friend of the Earth, I have often wondered the same. How can we sustainably sail the seas, enjoying our waterways with the least impact? Might there be a "Prius of the pond," a hybrid boat to provide our propulsion?

In 2008, Frauscher Bootswerft and Steyr Motors, two Austrian boat manufacturers, introduced a 25-foot diesel-electric hybrid speedboat. It uses an electric motor for speeds under 6 mph, and a regular diesel engine at faster speeds. While the boat is low-impact in no wake zones, and is perfect for conducting stealth missions in silence before speeding away for a James Bond-esque chase, you'll pay $185,000 for the privilege.

The benefits aren't easily justified at that cost. For far less than $185,000, you can more seriously reduce your impact while having just as much fun. If you happen to have $185,000 to spend to make your transportation green and sexy, you'd be better off with an electric Tesla roadster for $110,000, and a regular 25-foot speedboat for $50,000. 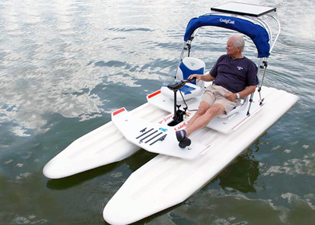 If you're looking for a more affordable option for fishing and puttering, CraigCat of Florida sells a hybrid catamaran for just $6,000. It too is diesel-electric, and you can boat for eight hours on just one gallon of gas. Unfortunately, it seats only two people, and topping out at 5 mph, it isn't fast enough for water sports that require faster speeds. But if you're looking for a fish-friendly fishing boat, it might just be perfect for you. CraigCat also sells an all-electric version that runs four hours on a charge, and a solar-powered version that runs for two and a half.

Another option is to use renewable energy to power auxiliaries, while relying on diesel for propulsion. One of the Alcatraz tour boats in San Francisco uses wind and solar power to fuel its navigation, lighting and electronics. 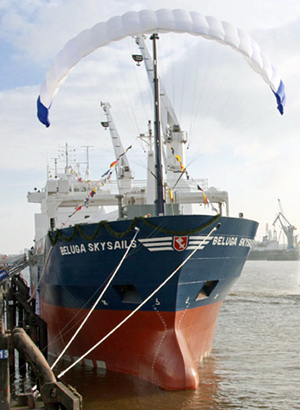 Much bigger things are afoot when it comes to bigger ships. In the next few years, existing cargo ships will be able to improve their fuel economy by 10 to 35 percent through a simple retrofit to make them diesel-wind hybrids. The SkySails propulsion system employs a giant, computer-controlled, retractable kite to catch the wind and offset some of the need for diesel power. The average kite has an area of more than 300 square meters and can be flown at altitudes of up to 300 meters, giving the vessel as much sail area as a reasonably sized sailing ship, but providing even more thrust per area, as the wind speed is considerably higher at that altitude.

The first kitesurfing container ship, the MS Beluga Skysails saved more than 10 percent of its expected fuel usage, and more than $1,000 per day, on a two-month journey from Germany to Venezuela, and on other trips to the United States and Norway, by employing a 160 square meter kite. Once commercialized, the kites will provide shipping energy at much lower cost than diesel. If you'll allow me to end with a sailing groaner, it seems that wind is "coming about."

Nick Enge plans to receive his bachelor's degree in atmosphere/energy engineering and master's degree in earth systems in 2011.

New Kitchen on the Quad

A Gymnast in Full