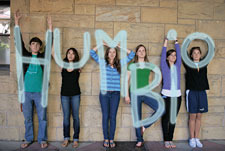 There's an intriguing elusiveness to the appeal of the human biology program, Stanford's most popular undergraduate major. Talk to folks from HumBio about its academic camaraderie and they tend to grope for a unifying explanation, even as they chirp about their esprit de corps.

Maybe Ryan Staatz, '11, who went through the program and also worked as an adviser to other students, has hit on the secret ingredient: "It's sort of like a dating site for majors," he muses.

In the most basic sense, he's referring to the interdisciplinary nature of the program, which offers majors the freedom and the challenge of designing an area of concentration. That means a research theme—global health as a human right, or the impact of nutrition on cancer, for example—that reflects what students find most personally exciting and relevant. "It matches you up with your best course of study," Staatz says.

More generally, he's talking about the program's explorative heart, which entails close mentoring by faculty and staff as students sort out all the possibilities for an academic plan. Many undergraduates are won over after a tantalizing flirtation. "As you consider majors," explains Staatz, "you think 'I might change later.' But you never change, because you end up liking it so much."

The program, pioneering in interdisciplinary studies, celebrates its 40th reunion this fall. It is the largest undergrad major—the most recent stats from the registrar show 219 bachelor's degrees conferred for 2009-10. Smiles expand on the faces of Professor Carol Boggs, the program director, and associate director Katherine Preston, when they note that after four decades, the HumBio family now encompasses some second-generation students.

Senior exit surveys indicate that about 45 percent of human biology majors plan to go on for a medical degree and more than half into some area of medicine. But that doesn't seem to be what generates word-of-mouth about the program.

Undergrads who are searching for a long-term academic relationship hear a buzz about a place where a bit of magic happens: Intellectual discovery becomes linked with self-discovery.

Daniel Bui, a senior, had biomechanical engineering in mind as a freshman. But Bui, who's fascinated by the prospects of applying biotechnological solutions to public health issues, decided the engineering path wouldn't enable him to adequately investigate a variety of social, cultural and political issues. HumBio was an ideal alternative.

Those opportunities are not provided willy-nilly. Students' academic plans and course proposals are well supervised because, as Preston notes, "We realize the integrity of the program depends on the balance between a flexibility and rigor." Indeed, the program is rooted in a three-quarter, 30-unit sequence of sophomore year courses that provide parallel instruction in basic sciences (such as molecular biology and human physiology) and social and behavioral sciences (such as developmental psychology and environmental issues). A degree is dependent on a mix of courses from within HumBio and from other departments.

The upshot, says Staatz, is a program defined by "the spirit of keeping students engaged." Students end up "fired up about something."

The process of figuring out what that something is has proven as alluring as it is demanding—and, after 40 years, enduring.