How the Landscape Changed

Changes to the campus have been a staple feature of virtually every presidency in Stanford’s history. Aging or outdated buildings are replaced; new facilities are added to satisfy needs for research and teaching, housing and operations. But there was nothing typical about the physical makeover that took place over the past 16 years.

More than 70 building projects have been completed since John Hennessy was inaugurated in the fall of 2000. New facilities for music, theater and visual arts framed the contours of an “arts district.” A second science and engineering quad was added. The Graduate School of Business received an entire mini-campus, the Knight Management Center. Dormitories were modernized. New and improved athletic facilities, including a rebuilt Stanford Stadium, augmented an already sparkling complex. And construction is underway on a massive renewal of the medical center, including a new adult hospital slated to open in 2018, and a major expansion of Lucile Packard Children’s Hospital.

Even with that, not all of the changes are evident. The university also completed the most ambitious infrastructure project since Stanford’s founding, a campuswide energy system that will save an estimated $420 million over the next 35 years and dramatically reduce greenhouse gas emissions. It included constructing a central energy facility that increases efficiency by 70 percent, replacing 22 miles of underground pipes and retrofitting 155 buildings. 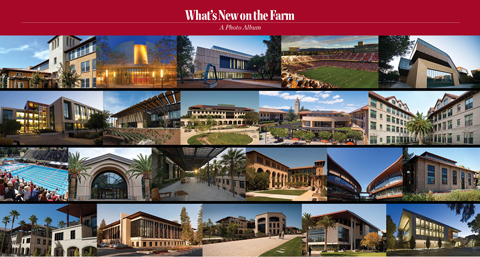