They still munch at all hours, but meal time is tastier (and healthier) than ever. 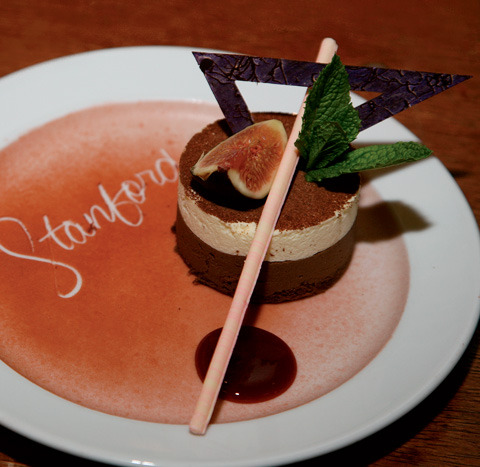 Growing up in Arlington, Va., as the daughter of an Ecuadorian mother and a Thai father, Victoria Virasingh, '14, had a comforting morning ritual. Her mother would squeeze fresh oranges to make juice for the family. Then she'd lay out a savory breakfast: flaky empanadas stuffed with chicken, egg whites or cheese; a fresh homemade smoothie; or perhaps a steaming bowl of oatmeal.

Later, when the lively brown-eyed teen entered Stanford, the simple joy of eating seemed a lot more complicated. So many choices! All-you-can-eat dining halls, some of them open nearly around the clock. And elsewhere around campus, brownie-fueled study breaks and tailgate party tables laden with sodas, chips and dips. "My mom was careful to make sure that our diets were balanced," the international relations major recalls, "but here at Stanford there are so many options. I didn't grow up with a lot of sweets, for example, maybe just fruits or some dark chocolate. Seeing cakes and cookies here, at first it was overwhelming."

There's no simple recipe for teaching young adults to eat better. But thanks to Senior Associate Vice Provost Shirley Everett and staff in Stanford's office of Residential and Dining Enterprises, the passage from home cooking to college fare may be getting easier. During the past decade, Stanford has built one dining commons and renovated older ones, replacing "cook and park" steam tables with stations where items are made to order. They've recruited chefs with a flair for vegetarian and ethnic cuisines, as well as experts in food safety, nutrition and allergen-free cooking. They've rethought every link of the campus food chain, from purchasing to composting, to make it more environmentally sustainable and fiscally responsible.

More important than any of these, though, has been a change of mindset. Stanford Dining views itself not as a glorified cafeteria service, but as a key player in supporting the University's academic mission. Its programs aim to teach students how to cook and eat for life. "We calculate that the 4,000 undergraduates on our meal plans each year will consume more than 200 million meals over their lifetimes," says Eric Montell, Stanford Dining's executive director. They figure, too, that habits formed on campus will ripple out in ways that transform individual lives and wider communities.

In many cases, he adds, it is students themselves who drive these changes. "They are much more interested in food today than their parents were. They think about where food comes from, and about the social justice aspects of food production. They think about environmental sustainability, and healthier eating, certainly. They come from all over the globe. And they watch the Food Network."

Lunchtime at the Arrillaga Family Dining Commons: The first-floor kitchen is fronted by a glass wall that allows students to watch while meals are prepared. Upstairs, there's an expansive salad bar topped with white ceramic bowls of organic oranges. On the back wall, a pizza oven blazes. Whole chickens, rubbed with pungent fresh oregano, twirl slowly on the rotisserie. White-jacketed executive chef David Iott, who worked at Ritz-Carlton hotels before landing at Stanford nine years ago, began his day by clipping herbs in the dining hall's organic garden.

There are no plastic cafeteria trays, except upon request. Instead, diners stroll around holding china plates, as they would at a hotel buffet. Hormone-free skim milk, fair-trade Starbucks coffee and Crysalli Artisan Water are on tap. A Pepsi machine is tucked away in a corner. "We have to have that," Iott says, a bit sadly. Then he brightens as he points out roasted organic carrots and an array of miniature decorated cheesecakes.

Stanford alumni who remember mystery meat, gloppy gravy and hashers with hairnets may find this surreal. But high-quality food service provides a competitive advantage to colleges these days. From New Haven to Berkeley, American universities are pouring hundreds of millions of dollars into environmentally sustainable residences and dining facilities. "You cannot be one of the premiere universities in the country," Montell says, "and not have the dining program be on a par with that."

Undergraduates on the Farm are required to pay somewhere from $1,700 to $2,000 per quarter for their meal plans. (The plans let them dine pretty much anywhere on campus, including Stanford Stadium.) Such fees don't fully cover the costs of food service, and so Stanford Dining has pumped up its catering, retail cafés, summer conference and executive food service operations. It also has started welcoming graduate students, faculty and staff into its halls, particularly at breakfast, when many undergrads are snoozing. "We have to run it like a business," Montell says.

Catering to the diverse tastes and needs of 10,000 meal-card holders is not a piece of cake. Diners expect vegan and vegetarian options, as well as menu items free of wheat, dairy products, nuts or shellfish. Muslim students can find halal meat entrées; Jewish students can get kosher meals that were prepared in a kitchen overseen by a mashgiach. Students who crave Southeast Asian comfort foods can head to the Wilbur or Lakeside dining halls. Mexican and Latin American food can be found at Cardinal Sage, a Stern Hall food station developed with celebrity chef Mark Miller.

To plan their menus, Montell and his chefs consult with 25 to 30 paid student "dining ambassadors," or DAs, who solicit feedback from their peers. The regular staff consists of 200 full-time employees, plus another 200 to 300 part-timers. Unlike most dining commons, which serve meals at preset times, the Arrillaga Family Dining Commons remains open nearly 24/7, with only short breaks during the wee hours. "I have as many transactions between midnight and 1 in the morning as I do at lunchtime," Montell explains.

It may come as no surprise that student eating habits deteriorate as the night wears on; fried chicken tenders are popular with the 2 a.m. crowd. Still, healthful eating is a concern for many students, according to Vivian Crisman, a nutritionist at Vaden Student Health Center. "The whole eating scene is one of those college-transition challenges," she says. Many students skip meals or find it hard not to overeat, particularly during stressful exam periods. They also may be burning fewer calories than they did at home. "Many of our students participated in organized sports in high school, but most are not at the varsity level when they come to Stanford, so there's this drop in activity level that they need to make adjustments for," she observes. "Another factor—one that obviously doesn't affect all Stanford students, but some—is access to alcohol, more than they had under their parents' roof. That's not calorie-free; it has to be factored into the whole picture."

Stanford Dining's nutrition efforts were bolstered with the hiring in 2010 of Elaine Magee for a full-time position as performance and wellness nutritionist. She oversees the Performance Dining Initiative, developed in partnership with the Culinary Institute of America, the Department of Athletics and the School of Medicine. Dining hall patrons who want to eat better need only follow the signs: Green stickers are used to label foods that can boost immunity. Foods that enhance brain performance, such as lima beans, are marked with a purple dot. A sign next to the baby spinach in Arrillaga proclaims that "dark green veggies are a SUPER FOOD, helping to boost immunity and brain and body performance."

What do students say about the food? Stanford Dining's Facebook page (in addition to promoting student events like Yuletime gingerbread cookie decorating or a Green Eggs and Ham breakfast) garners comments like this one from Grace Kihm, '13: "Just wanted to say: Manz[anita] dining is awesome! :D I especially like their pre-made salads and their panini bar." Queried for this story, students offered more tempered but appreciative comments. "Sometimes it can be frustrating to have the same options, like Asian food every Sunday," says Alison Logia, '16, "but I like the food in general." Brandon Ewonus, '14, sometimes finds there are fewer healthful dining options late at night. Otherwise, he says, "I feel like my eating habits have probably improved a lot. I used to not eat a ton of fruits and vegetables, but here there is always a salad bar."

Students hungry for more learning can sign up for cooking and nutrition workshops in Arrillaga's downstairs seminar room and kitchen. In last year's popular "Farm to Fork" series, they learned how to make everything from sushi to a traditional Thanksgiving dinner. One day, Taylor Black of Marin Sun Farms laid a side of pork on the counter and taught basic butchering. "As students approach graduation, they sometimes realize they are going out into the world with no practical skills," observes Hasso Plattner Institute of Design fellow Matt Rothe, a former Stanford Dining staffer who helped organize the classes. "There is a real craving for experiential education."

The son of a Colorado corn farmer, Rothe, MBA '07, was among the first people hired in the late 2000s for a full-time position at Stanford Dining: sustainable food program manager. Building on the work of his predecessors, Emmett Hopkins, '06, MS '06, and Erin Gaines, '07, he helped the department rethink everything from how food is procured to how waste should be handled. A big part of the job involves visiting Northern California farms to evaluate their production practices and arrange for bulk purchases of organic products in season. Stanford has developed relationships with more than 200 local farmers and manufacturers, including Alba Organics of Salinas, Calif. (greens, pumpkins and carrots), Christopher Ranch in Gilroy (garlic) and Marin Sun Farms (grass-fed hamburger patties). Today, 30-40 percent of Stanford's food is grown, raised or processed from sources within 150 miles of campus.

Stanford's current sustainable foods coordinator, Dara Olmsted, also helps students to grow their own fruits, vegetables and herbs. While Row houses like Synergy have had organic plots for decades, the development of small gardens to complement the menus at Stanford's larger residential halls is a more recent phenomenon. Walking around the raised beds next to Arrillaga on a warm May morning, she proudly points out the flowering sage, a small artichoke plant and some delicate strawberries. To tend the beds, she counts on a volunteer list of 70 Stanford students, plus nine paid student intern managers. "A lot of our students have experience working gardens at their high schools or at farms in the summer," she notes. "For many, it's therapeutic."

Virasingh, who missed her mother's Ecuadorian cooking, dealt with her freshman food fretting in classic Stanford fashion: She signed up to be a dining ambassador, then plunged into the subject of nutrition. As a junior, she worked as a wellness intern for Stanford Dining, teaching fellow students from all over the world how to eat and thrive on campus. When Mamá flew in recently from Washington, D.C., she was visibly impressed. "Usually when parents visit," Virasingh says, laughing, "they take their daughters and sons out to restaurants. My mom wanted to eat in the dining hall every day."

Theresa Johnston, '83, is a frequent contributor to Stanford.

Nutrition advice is confounding and often contradictory. What are we supposed to believe? Writer Nathanael Johnson went shopping for answers.