When the music industry convulsed, one critic reinvented herself. 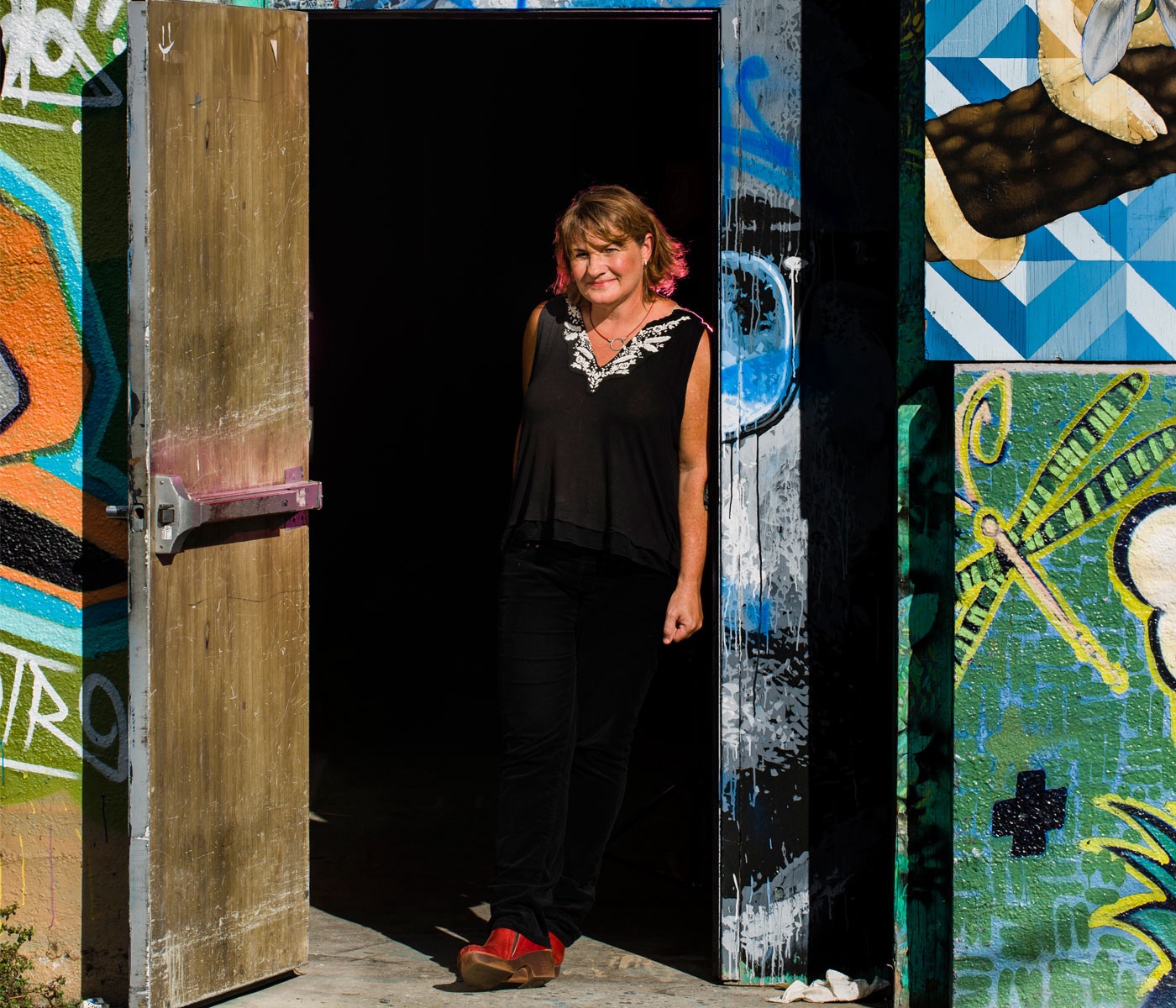 GINA ARNOLD IS AN ACADEMIC nowadays. But her calling as a rock critic, going back to her days growing up in Palo Alto, officially began with the Sex Pistols' final show in their original incarnation, which happened in 1978 in San Francisco. The teenage Arnold loved the show but not the review that appeared in the San Francisco Chronicle. So she wrote an angry rebuttal featuring the memorable line "Johnny Rotten was a doll." Impressed, the paper's editors printed the letter and began offering her assignments.

That sense of nerve and insistence on being heard has served Arnold, PhD '11, well in the decades since. In columns, reviews and features published everywhere from fanzines up to Rolling Stone magazine, she chronicled the rise and fall of alternative rock: the Replacements and other scruffy 1980s underdogs; the alternative-is-the-new-mainstream explosion in the 1990s; and the genre's subsequent decline into irrelevance.

'I thought I was an advocate, but I was just a merchant, helping to move product.'

Always bearing witness with unabashed first-person passion, Arnold was writing about Nirvana years before their 1991 breakout took underground rock to the masses. And she was an early champion of Exile in Guyville, Liz Phair's 1993 signpost album for both alternative rock and gender relations—and the subject of Arnold's acclaimed new book of the same name (Bloomsbury Books, $14.95). Phair's album was bold, putting forth a distinctly female point of view frankly expressed with raw emotion. The reaction to it exposed attitudes within the supposedly enlightened world of indie-rock that were every bit as sexist as its mainstream counterpart's. Even as Guyville was sweeping that year's major critics polls, Phair was more or less run out of her Chicago hometown.

Arnold could relate, as a writer who has often found herself derided for propagating outside-the-norm opinions—whether defending the lightweight '90s girl-pop band the Spice Girls or blasting the Rolling Stones for "as usual, only going through the motions." Arnold's criticism pushed so many buttons that, for years, "Kill Gina Arnold" graffiti and T-shirts were common sights around the Bay Area.

Looking back, Arnold is self-critical. "It sounds so arrogant in retrospect, but indeed, for many years I wrote impassioned screeds extolling and excoriating various bands and artists, under the mistaken impression that it mattered which records were heard more than others," she writes in Exile in Guyville. "Somehow, I never realized that I was simply touting acts for an industry that didn't care which record got sold, as long as it got sold. I thought I was an advocate, but I was just a merchant, helping to move product."

Arnold's career change from alternative-rock nightlife to the daytime existence of teaching writing and rhetoric at the University of San Francisco goes back 15 years, when the record business was at its apex. At that time, album sales were so high that plain old gold (500,000 copies), platinum (1 million) and even multi-platinum designations were no longer adequate to measure the biggest of the mega-sellers. So at the end of the 1990s, record companies came up with a new metric: diamond, for 10 million copies sold. Most diamond albums were by the likes of soft-pop Canadian singer Céline Dion and the Eagles, but the occasional Nirvana or Pearl Jam from Arnold's world also achieved that distinction.

Such was the commercial scale of popular music in 1999, when Arnold took what was supposed to be a yearlong break from the music industry with a midcareer arts journalism fellowship at Columbia University's Graduate School of Journalism. By the time she finished the fellowship in 2000 and returned to the music beat back home, everything was changing. Music lovers had learned how to trade pirated copies of songs over the Internet without paying for them, mostly using the peer-to-peer service Napster, which the record companies sued in 2000.

"I came back and did a lot of reporting on the Napster trial going on in the Bay Area," Arnold says. "And I had one of those moments of prescience: 'Wow, this is going to completely wipe out the music industry as we know it—and critics, too.'  I had left one world and come back to a totally different one for both journalism and music." As Arnold writes in Exile, "The discursive method has been outsourced by the algorithms that run Pandora and iTunes and Google Music and Spotify and Amazon and Last.fm, and as disconcerting as that may be, it is a fact."

A year later, Arnold was also the single parent of a daughter (Caitlin, now 13) and feeling in dire need of a career change. As she admits, "Academia seemed as far as you could get from my punk-rock journalist background." But two of the other new mothers in her baby group taught at area universities (including Stanford), and they encouraged Arnold to go for a PhD. It took a while, but she earned her doctorate in modern thought and literature in 2011.

"I was so far wide of what a typical grad student is," Arnold says. "Most are in their mid-20s, unmarried, no kids. I was 38 and the single parent of a 2-year-old. A typical day was rereading Marx's Das Kapital and making 30 valentines for the nursery-school class party. But I think everybody in their mid-30s should take a year off like I did with the Columbia fellowship, and then everybody with little kids should go back to school."

Going back to school allowed Arnold to resume her diving career. After having spent her undergraduate years at UC-Berkeley as a competitive springboard diver, she's now a member of Stanford's club diving team as a platform specialist. She competed in the world championships in Montreal last August, placing seventh. So it is that Arnold's Twitter bio at @ginanarchy reads, "Still Exiled in Guyville: author, diver, mom and so forth."

Given her parallel struggle as an opinionated woman unafraid to speak her mind in a male-dominated field, Phair was a good subject fit for Arnold. The singer claimed to have written her album as a song-by-song response to the Rolling Stones' hallowed 1972 album Exile on Main St., a tongue-in-cheek ploy that attracted a huge amount of attention. That didn't stop many of Phair's peers in Chicago's Wicker Park indie-rock district from dismissing her as a no-talent fraud who used and took advantage of more talented male artists. Arnold, meanwhile, had always had to contend with dismissive attitudes from men and boys who didn't appreciate her willingness to gore their sacred cows. 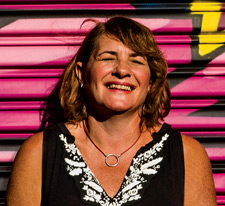 "I always admired Gina's fearlessness," says Ann Powers, a critic and correspondent for National Public Radio. "What really amazed me the most was that she'd always very bluntly say whatever she thought, because I was much more timid in my early 20s. Sometimes people would get mad, but she did not care. She always just said what was on her mind, and her very strong principles were always represented in her work."

Arnold wrote two previous books: 1993's Route 666: On the Road to Nirvana and Kiss This: Punk in the Present Tense in 1997. If things go according to plan, her Stanford dissertation—"Rock Crowds and Power," which transposes the mob-rule themes of Elias Canetti's seminal 1960 book, Crowds and Power, to rock audiences—should be published in the not-too-distant future by an academic press.

For a follow-up, Arnold wants to extend that work into sports and virtual crowds with Games, Crowds and Power.

In the meantime, Exile in Guyville has been a gratifying revisit to the rock writing that used to be Arnold's full-time occupation. Published as part of "33 1/3," Bloomsbury's long-running 96-book series about classic albums, it's been the best received of Arnold's three books. The New York Times called it "charming and brave and unexpectedly moving." And Greil Marcus, one of rock criticism's grand old men and a longtime Arnold admirer, wrote a review calling her "a wonderful writer: fearless, precise, full of doubt, never taking anything for granted."

Best of all, though, is the fact that the book's reception has silenced a lot of Arnold's doubters. "It's been weird to go back into it," she says. "So fraught. But that New York Times review was extremely satisfying, even healing in a lot of ways. It seems so weird that one article can make this kind of change, but one thing that review eliminated from my life was a lot of the 'I hate that bitch' chitter-chatter."

David Menconi is the music critic at the Raleigh (N.C.) News & Observer.

When Earth Took a Wallop

The Brain: The Final Frontier?

Neuroscience institute is poised for breakthroughs.

How a family’s trip to Germany became a journey in reconciliation.