Having a Good African Hair Day 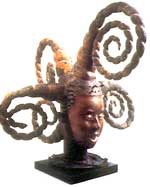 On a recent trip to Amsterdam for a conference on popular culture, history associate professor Kennell Jackson slipped into a coffee bar one afternoon for a drink. He emerged with a photograph that told a story he used in his autumn-quarter colloquium, African Coiffure and Its Legacy in the Americas.

The picture Jackson snapped showed an Italian teenager in a Dutch cafe who'd returned from a vacation in Thailand, where he'd had his hair beaded and braided in the style of tennis super sisters Venus and Serena Williams.

"Black hair today is the product of a global influence of styles and ideas from Africa, the Caribbean and North America," Jackson says.

In an essay he wrote for the catalog of "Hair in African Art and Culture," an exhibition on display at the Cantor Arts Center through December, Jackson looks at Afros, cornrows, dreadlocks and jheri curls. He examines the influence of 'do's worn by '60s radical Angela Davis and '90s bad boy Latrell Sprewell. And he returns to the dark days of the 1850s, when debates raged in the American South about whether black hair might be wool--in other words, nonhuman.

The last time Jackson taught a course on Black Hair in African-American Culture, in 1992, he was mocked by the Wall Street Journal. But his students produced such remarkable research--looking at the political role black barbers played in America's Reconstruction, for example--that Jackson says the public harassment was worth it.

"As Richard Pryor used to say, 'What is really happening here?'" Jackson asks.

I may be new to Stanford, but I know all about 'the farm'

A Bold Move Toward Better Learning

The Campaign for Undergraduate Education will fund a teaching and research program second to none.

Medicine is a noble pursuit, but I'd rather be doctoring paragraphs.