Have Wheels, Will Traverse Central Asia 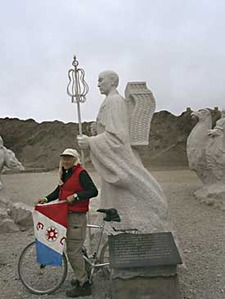 Approaching the terminal of Hong Kong’s Star Ferry after a cancelled business meeting, Alan Nichols heard warning bells. He did what any self-respecting Type A personality would do—he rushed the gate. On the upper deck of that ferry, Nichols met a stranger and received an extraordinary invitation. Keith Brown had just obtained permission from China to be the first foreigner to bicycle through an erstwhile impermeable Tibet. He asked Nichols to join him.

This 1988 meeting became the first leg of a lifetime obsession. Nichols determined to ride the full length of the ancient silk trade route, from the eastern shores of the Mediterranean to China’s Yellow Sea. The route winds through deserts with surface temperatures hot enough to melt bicycle tires, followed by frozen passes leading to Aksai Chin, reputed to be the coldest place on earth. Other cyclists who attempted this route eventually abandoned their bikes for camels.

Traversed by Marco Polo, Genghis Khan, and the monks and clerics of Christ, Buddha and Mohammed, the route known as the Silk Road passes through some of the world’s most fascinating places, but also some of its most dangerous hot spots. “Between the U.S. State Department’s warnings and my son Shan’s memorization of the relevant chapters of The Most Dangerous Places in the World, I can’t say I wasn’t warned,” Nichols says. He skirted violence in Turkmenistan, guerrilla warfare in Tajikistan, land mines, bribes and more than one arrest. (Though he usually rode alone, he would rendezvous with a support vehicle each evening.)

Nichols cycled through China as the Tiananmen Square protests unfurled, and was in Iran when George W. Bush declared it part of an “axis of evil.” “During kids’ cartoons, instead of advertisements, they’d show a picture of Uncle Sam stabbing a knife into the hearts of children,” he says. “The propaganda war being waged against Americans was unbelievable. On the other hand, I’ve never been in a country that was so pro-American. People take you aside when no one is looking and whisper that they hope America will invade Iran, just as they have Iraq.”

Nichols saw the caves where Mao Tse-tung planned his revolution, hobnobbed in the ancient hub of Kashgar and crowned the Turrugut Pass. Yet 10,300 miles later, it’s the people more than the places that linger—the plasterer who walked off the job to show him a mystic mountain, an oil-rig designer who made it his personal quest to keep Nichols out of an Iranian jail, the Tajikistan border guard who waved off Nichols’ bribe and gave him money after a particularly harrowing mountain pass.

In May, at age 75 and four years after undergoing a quintuple bypass, the Belvedere, Calif., lawyer finished the fifth installment of his ride and became, he thinks, the first person in history to have accomplished the route’s full length on human energy alone. “The term Silk Road is a misnomer,” Nichols says. “The route was altered depending on the weather and where the bandits were. It wasn’t one road; it was a web. And just like a fly, I got stuck in it.”