Getting the Most Sustainable Squeeze from your OJ: Essential Answer 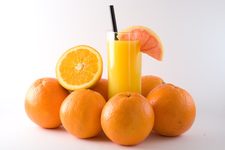 If you’re the type to glug a big glass of orange juice to start the day, here’s the good news: OJ is a lower-energy, lower-carbon alternative to that other breakfast favorite, milk. Growing, squeezing, shipping and storing a gallon of straight-from-the-carton orange juice emits about 7.5 pounds of climate-warming carbon dioxide, while a gallon of dairy milk yields more than 17 pounds of carbon emissions.

Not all OJ is created equal, though, and you’re right to ask about the energy differences between frozen concentrate and ready-to-serve juice that has never been concentrated. Overall, not-from-concentrate options use less energy and generate fewer climate-warming emissions. But let’s dive in to the specifics of how that juice goes from grove to your glass. 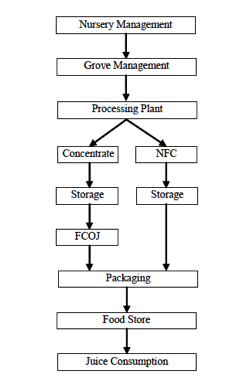 A recent lifecycle assessment commissioned by the juice brand Tropicana and conducted by the Carbon Trust illuminated the weaknesses in their production and distribution systems. The study focused not only on energy use, but also assessed carbon emissions and many other inputs and waste products at each stage of production. (See flow chart for the different stages,) Tropicana, which markets ready-to-serve orange juice, learned that growing the oranges was the largest single source of climate-warming emissions in the entire process. Approximately 35 percent of total emissions came from the grove, because of the fertilizer used on orange trees. Because of this, Tropicana is working with its growers to reduce the carbon expenditure from fertilizer, and hopes to reduce the carbon footprint by as much as 15 percent. Preliminary data, collected by Tropicana and analyzed in part by the University of Florida, has not been released yet. We will have to wait for results until at least 2015, as the trees mature.

Regardless of the brand they’re sold under, once harvested, Florida oranges are trucked to processing plants, also in Florida, for juicing. They are then either packaged and sold as “Not From Concentrate” (NFC), or are concentrated through vacuum evaporation for “Frozen Concentrate Orange Juice” (FCOJ). FCOJ is either sold to consumers directly, or reconstituted and sold in ready-to-serve form.

In the processing plants, all juice is exposed to some degree of heat, a major use of energy. NFC juice is pasteurized by heating to 160ºF (71.1ºC) for a minimum of six seconds, and then stored. This storage can also be energy intensive, especially when the juice is kept frozen, as it sometimes is before pasteurization takes place.

To produce FCOJ, raw orange juice is evaporated down with both heat and vacuum technology. This energy expenditure represents approximately 90 percent of a factory’s energy use, making it a very costly process. At the end of this step, the mixture is at a seven-to-one strength ratio, meaning much of the water has been removed. This concentrate is then frozen to 20 degrees Fahrenheit for storage. For the product directly purchased by consumers, the super-concentrated mixture is diluted to a four-to-one mixture and then packaged. Some orange juices are reconstituted and sold at normal strength.

Once processed, the juices have to be transported to the markets. The concentrated forms take less energy because of their compact size and substantially lower weight. Nevertheless, even the energy-intensive distribution of Not From Concentrate orange juice only amounts for 22 percent of the juice’s total carbon dioxide emission. Of course, the emissions in this step greatly depend on distance from processing plants (mainly Florida, and also California), but in most cases, this consideration is not important enough to shift the balance.

NFC uses less energy in the processing step, while FCOJ is more efficient to ship. However, the NFC comes out slightly better in terms of total carbon emissions, at 7.5lbsCO2/gallon. The clear loser is reconstituted orange juice, which undergoes the energy-intensive concentration process to prevent spoiling, but then is transported and sold in dilute form under the umbrella of “Ready to Serve.” So next time you sit down for a refreshing breakfast beverage, go ahead and grab some straight-from-the-carton, not-from-concentrate goodness.

Angela Hayes, ’12, is a graduate student in Earth Systems.

Getting the Most Sustainable Squeeze from your OJ: Nitty-gritty

Getting the Most Sustainable Squeeze from your OJ: Nitty-gritty

A young alum thinks money is the key to increasing kidney donations.

For One Senior, Four More Medals