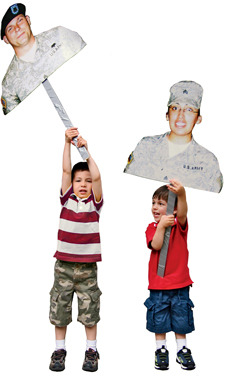 "This Flat Daddy doesn't talk back," 4-year-old Sabrina says as she strokes a life-size cardboard photograph of Sgt. William "Papo" Stephens affixed to her bedroom wall in the Bronx.

"I have a other daddy far, far away," Sabrina Stephens continues, explaining to the camera, "and he can't come back because he's saving the world."

Sabrina and military families like hers are the subject of Flat Daddy, a documentary directed by New York City-based filmmakers Betsy Nagler, '90, and Nara Garber. With producer Peggy Sutton, the co-directors have submitted a cut of the film for consideration in the 2011 Sundance Film Festival and will be seeking distribution in festivals and television.

The film examines the issues facing military families by reporting on a quirky phenomenon that surfaced during the wars of the past decade: the Flat Daddy. The smiling headshot of Sgt. Stephens in his military uniform is one of thousands of cardboard images of real servicemen and -women who are stationed overseas. The cardboard look-alikes reside in military homes around the country, helping children, spouses and parents cope with the absence of a family member.

Flat Daddies were distributed in 2006 by the Maine National Guard to the families of members deployed in Iraq and Afghanistan. Other private companies and service organizations caught on to the trend. SFC Graphics in Toledo, Ohio—the largest manufacturer—has delivered more than 7,500.

In September 2006, Nagler was struck by a photograph in the New York Times of a serviceman's young son playing on a swing set with his Flat Daddy. Not long after, she was introduced through mutual friends to Garber, a cinematographer who had seen the same photograph. Both filmmakers wanted to explore the story further.

Military family life was uncharted territory for them. (Nagler's résumé included work on The Sopranos and the children's program Blue's Clues in addition to her own documentary work.) As they traveled the country interviewing military families, they realized that their story was less about cardboard effigies and more about families' multidimensional private battles to endure a loved one's deployment. "It's a film that's very much about absence and what this does to families," Garber says.

The changing face of American warfare poses challenges for families. National Guard and Reserve units have been called to active duty at an unprecedented rate during the ongoing wars in Iraq and Afghanistan. Many of these citizen soldiers have dependent children living at home, and they are far less likely than career service members to live on a military base or near other military families who can offer empathy and support. "The soldier ethic rubs off on the families," Nagler says. For those waiting at home, "There's a real sense of, 'This is my job.'"

That was the case for Donna and Lowell Winter of Woodbury, Minn., who raised their two grandsons (then 3 and 2) during the 15 months their son and daughter-in-law, both Army sergeants, were deployed in Iraq. Donna had ordered cutouts of the boys' parents (in Minnesota, they're known as Heroes on a Stick) when she got a call from Nagler. The filmmakers followed the Winter family during a year when the increasingly tattered Heroes on a Stick accompanied the boys to birthday parties, the mall Santa Claus and the Minnesota State Fair. Michael and Christina Winter returned home safely in November 2009.

For Donna Winter, the film is a chance to help other American families understand the sacrifices soldiers' families make. "I hope when people see [the film] they realize how important it is to stand behind those military families who are left behind," she says. "It doesn't matter where you stand politically. You always have to support the kids who are left behind."

CORINNE PURTILL, '02, is a freelance writer based in New York City.