Fit to be Dyed

With 50,000 images to choose from, web shoppers can tailor a T-shirt. 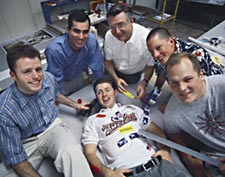 The photo of our toddler posing as a policeman for Halloween was meant for more than our family album. I wanted my husband to have a T-shirt displaying our little officer.

So I logged on to Zazzle.com and pressed the “design” button. I was relieved to see that the directions were pretty straightforward. First, I uploaded a digital photo of my son to Zazzle’s design page. Then, using the arrow keys, I centered the photo on an image of a shirt. Finally, I added a headline—Who Rules YOUR House?—and ordered my personally created T-shirt for $20.64. The entire process took less than 10 minutes.

Four hours later, the T-shirt arrived at our Palo Alto front door. Was Zazzle giving me special treatment because I was writing this article? No, the man delivering it assured me. It’s just that Zazzle staffers—none of whom have job titles—occasionally drop off orders placed near the company’s Palo Alto headquarters. “We’re a little neurotic about customer service,” explained Mike Agnich, ’00, one of the company’s first employees.

Fast and personal: these are the aims of Zazzle, which bills itself as the first Internet company enabling users to create, buy and sell images to be printed on T-shirts, posters and other products. Thanks to a recently refined manufacturing process, the company can deliver goods within 24 hours, keep overhead costs low and generate healthy profit margins, its founders say. Buyers can obtain original T-shirts and posters at affordable prices, even if they want only one or two, and designers can display their works online, attracting customers—and earning royalties—from around the world.

“There’s never really been a venue for making money off the millions of artists’ images out there,” says Robert Beaver, ’68, JD/MBA ’72, one of the company’s founders. A lifelong entrepreneur who has started four successful companies, he launched Zazzle in 1999 with his sons, Bobby, ’00, and Jeff, ’01, and a longtime collaborator, physicist Gene Westerberg.

After an 18-month development phase during which a few hundred users could access the site by password, Zazzle.com opened to the public in April. Although the founders won’t say how much money was invested, the company remains completely self-funded and generates “very high gross profit margins,” according to Beaver.

Organized like a megamall of art galleries, Zazzle.com hosts some 50,000 images sorted into categories such as “college,” “insults” and “fine art.” Site visitors can create, buy or sell images—or, as in my case, do all three. In addition to dreaming up and purchasing a shirt for my husband, I submitted my design to the “kid” category, hoping that another user, sympathetic to the ironies of parenting, might want to buy it.

Leticia Plate, a commercial artist with displays on the site, says she was pleased to have the opportunity to “just have fun” with her artwork, rather than conforming to client requirements. Her fun, it turns out, has also been profitable. Several months after Plate submitted her first images, a Zazzle shopper from a nonprofit organization ordered a few hundred T-shirts bearing her “Forever” design for a charity event. Zazzle pays designers, who grant the company nonexclusive rights to their work, a 10 percent royalty each time someone buys a product printed with one of their pictures, and gives them a 10 percent discount on purchases.

Offline, personalized T-shirt businesses are mainly mom-and-pop shops using screen printing and iron-on methods on cotton shirts, says Beaver. But cotton has drawbacks, he says. Because it is a strong fiber that does not bond well with dye molecules, images printed by traditional methods often fade or crack over time; they seldom feel like part of the fabric. And screen printing usually requires high-volume orders to cover the cost of making separate screens for each color.

Still, the printed T-shirt business brings in annual revenues of around $20 billion in the United States, Beaver says. The size of the market—and its fragmentation—pointed the way to Zazzle’s niche. The founders conceived of a T-shirt business that would rely on user-generated designs and the Internet’s vast reach. But first, they had to find a way to make T-shirt images last, and make it cost-effective to print one shirt at a time. Westerberg went into action.

An MIT alumnus with a master’s degree in physics and a former researcher with SRI International, Westerberg had worked with Beaver before to develop a method to bake foods like pizza faster than traditional ovens. But inventing a new process for dyeing T-shirts proved frustrating. After months of work, Westerberg thought he was close to perfecting a process for bonding water-based inks to cotton. But hope literally washed away one day at the laundromat as he watched a popular detergent attack the molecules most important to his dyeing process.

So Westerberg switched strategies and started tinkering with a sophisticated “dye sublimation” technology. The trick to making it work for T-shirts, he explains, is to use a special fabric woven with polyester on the outside and cotton on the inside. The polyester bonds with dye molecules when they are heated into a gaseous state, solving the fading problem. The cotton lining provides comfort.

Next, the company expanded to posters. Beaver figured out how to keep several large ink-jet printers roughly the size of refrigerators running up to 20 hours per day, applying digital images to satin-finish paper and heavyweight canvas.

Posters by Gilles Tran, a graphic designer in Paris, are among Zazzle’s most popular offerings. In the past, Tran says, he turned down friends who wanted posters of his modernistic designs because “it was too expensive for me to find a printer and ship it myself.” Now, he earns steady royalties from Zazzle.

From the start, the Zazzle founders expected cartoons and digital art to be popular with users, and they are. But other types of illustration have drawn unexpected interest, such as historic maps and public-domain images from the Library of Congress, NASA, National Archives, UC-Berkeley’s Bancroft Library and the Hoover Archives, among others, says staffer Matt Wilsey, ’00. For these, Zazzle uses professional editing software to remove stains, tears and rips from the images. The company hopes to entice more institutions to make their collections available to the public through Zazzle, Wilsey says.

As traffic to the website increases via word of mouth, the company is ramping up staffing (there are now 14 employees), office space and advertising. They foresee a time when site visitors can create and buy an array of image-imprinted products, from coffee mugs to mouse pads. “If we get our user base big enough, we can offer anything,” Beaver says.

In the meantime, artists, shoppers and hobbyists—as well as proud parents like me—continue to build up the site. That T-shirt I ordered hasn’t faded one bit. But, alas, I’m still waiting for my first royalty check, preferably hand-delivered to our front door.

Lucinda Rector Filppu is a writer living in Palo Alto.